All members of the Cup Series’ “Big 3” have strong resumes at the track. Kevin Harvick won here in March – part of a three-race winning streak. Martin Truex Jr. won here in 2017, the same year he also claimed the 2017 Playoff opener (then at Chicago). And Busch, who has led the standings for the last 21 weeks, won at his hometown track in 2009.

Busch, who has six wins and 21 top-10 finishes through the season’s first 26 races won the regular season trophy on Monday following the rain-delayed race at Indianapolis Motor Speedway.

Harvick, who has a series best seven wins, is tied in points with Busch heading into Vegas. And Truex, who crashed out at Indy, is third in the standings with four wins.  It’s been a season-long three-race “winning drought” for those three drivers with Kurt Busch (Bristol, Tenn.) and Penske Racing’s Brad Keselowski (at Darlington, S.C. and Indy) claiming the wins on the eve of the Playoffs.

The final four members of the 16 drivers to advance to the playoffs include Denny Hamlin, Aric Almitola, seven-time Cup champion – and four-time Las Vegas winner – Jimmie Johnson and his Hendrick Motorsports teammate Alex Bowman. All of them are looking for their first victory of the season. The bottom four drivers in the rankings following the Charlotte race will be eliminated from the playoffs.

The DC Solar 300 on Saturday (5 p.m. ET on NBCSN, PRN and SiriusXM NASCAR Radio) marks the final regular season race for the Xfinity Series with three Playoff positions still to be firmed up, technically. Five-race winner Justin Allgaier leads the points by 49 over Cole Custer, who has 20 top-10 finishes but is still looking for his first 2018 victory.

Rookie Christopher Bell, 23, has four race wins and is third in the standings, trailing Allgaier by 52 points. After leading the standings for four weeks this summer, the Joe Gibbs Racing driver has finishes of 23rd or worse in two of the last three races. He won the pole position, however, and finished runner-up to Kyle Larson in the Vegas race in March.

Others to have already clinched a postseason berth include Daniel Hemric, Elliott Sadler, Brandon Jones, Matt Tifft and Ryan Truex. Saturday’s race will formalize the final three spots in the Playoff rankings, which are currently filled by Ryan Reed, Ross Chastain and Austin Cindric. A win by a championship-eligible driver outside of the 12 listed above would push one of those three out of contention.

Round Two for Trucks

The Camping World Truck Series returns to Playoff competition Friday night in the World of Westgate 200 (9 p.m. ET on FS1, MRN and SiriusXM NASCAR Radio). Justin Haley, 19, won the Playoff opener on the Canadian Tire Motorsports Park road course two weeks ago and has assured himself a position in the Round of 6.

Defending series champion Johnny Sauter (2009) and Ben Rhoades (2017) are the only two Playoff drivers with previous victories at the Vegas 1.5-miler. Sauter has seven top-10 finishes in 10 starts here.

Cup championship co-leader Kyle Busch won here in March but is not entered this weekend.  Four drivers among the top-five in that race are current Playoff drivers – runner-up Sauter, Brett Moffitt, Grant Enfinger and Stewart Friesen.

What to Watch For:  Last year’s Monster Energy NASCAR Cup champion Martin Truex Jr. started his title run with a win in the opening Playoff race – then at Chicagoland. …. Regular season champion Kyle Busch and seven-time race winner Kevin Harvick enter this 10-race Playoff run tied atop the points standings – with a 15-point lead over third place Truex. …Jimmie Johnson is the winningest driver in Sunday’s field with four victories at Vegas. Matt Kenseth has three and Playoff drivers Kyle Busch and Brad Keselowski each have two wins here. They are the only four drivers with multiple wins at the track. … Las Vegas native Kyle Busch is both the youngest ever pole winner at the track (22 years old, 2008) and youngest race winner (23 years old, 2009). … Kyle Busch is also the only driver to win consecutive pole positions (2008-09) and the only driver to win a race from the pole position (2009). … Kasey Kahne, who is not racing this weekend for medical reasons, holds the track record for most pole positions (3). He is the only driver to win his first pole at the track. … Five of the 21 Cup races at Vegas have been won from the front row. Kenseth’s win in 2004 from the 25th starting position is the farthest back a winner has started. … Roush-Fenway Racing leads all organizations with seven Vegas wins. Hendrick Motorsports is next with five. … Ford leads manufacturers in wins here (10), Chevrolet is second with seven. … Ryan Newman has the most starts (17) without a victory at Vegas. … Dale Earnhardt Jr. has the most runner-up finishes (three). Kyle Busch is next with two. … Kenseth’s 10 top-10 finishes are most among active drivers at the track.  …. The closest margin of victory is .045-seconds – when Johnson beat Kenseth in 2006.

What to Watch For: This week marks the first time the Xfinity Series has raced twice at Vegas in one season. …. This is the final regular season race. Five-time winner Justin Allgaier leads the standings by 49 points over Cole Custer. The regular season champion will receive a 15-point bonus. … Allgaier’s five wins double his career win total. Last year he won twice and that was a single season best for him. … Allgaier has not won at Las Vegas but has seven top-10 finishes in eight starts, a runner-up in 2011 and a third place earlier this season are his best marks. …Custer has a career best 10 top-five and 20 top-20 finishes but is still looking for a victory in 2018. His only win in the series came at the Homestead-Miami Speedway season finale last year. … Rookie Christopher Bell has four wins but is ranked third in the standings with a recent spate of tough luck. He has two finishes of 23rd or worse in the last three races. He was runner-up in his only Xfinity Series start here, finishing second to Kyle Larson in March. … Ryan Reed, Ross Chastain and Austin Cindric are looking to lock in their position in the Playoffs. A new winner this week would eliminate one of those drivers. …The last five race winners at Vegas include Cup stars Brad Keselowski, Austin Dillon, Kyle Busch, Joey Logano and Kyle Larson. … There are no previous race winners in the field this weekend.  …. Mark Martin holds the record for most series wins at the track (four).

Next Race: World of Westgate 200

What to Watch For: Cup driver Kyle Busch won the race here in March but is not entered in this week’s Playoff round. … Ben Rhodes, who is among the Playoff contingent, won in 2017 and defending series champion Johnny Sauter won in 2009. They are the only two members of the eight-driver Playoff field to hoist a trophy in Vegas. … Toyota has won the last five manufacturer’s championships. Should they win in 2018 it would be a record for most consecutive wins. … Chevrolet has won the most races (9) at Las Vegas. …. Justin Haley, 19, is the youngest member of the Playoff field and the only one to have already secured his entry into the next round thanks to a win in the Playoff opener at Canadian Tire Motorsports Park two weeks ago. … Eight times the pole-winner has gone on to win the race – the most prolific starting position. …Erik Jones is the youngest championship driver in series history, winning the big trophy in 2015 at the age of 19. ….Playoff contender and two-time former series champ Matt Crafton has won at every 1.5-mile track the series visits except for Las Vegas and Chicagoland. … Noah Gragson, a Las Vegas native, has finishes of 13th (2017) and 12th (2018) at his home track. ….At 42, Crafton is the oldest driver among the playoff eight. Of note, Ted Musgrave won the 2005 title when he was 50. 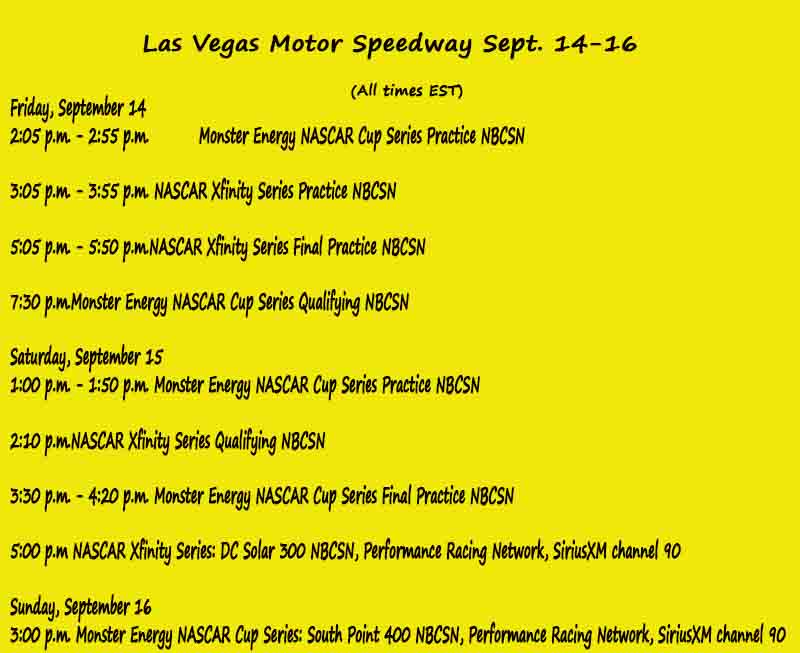