Larson led a race best 200 laps compared to 117 for Busch. And in the final 129 laps, the two drivers exchanged the lead four times between themselves. Larson led 65 of those laps, and Busch led 64 – including the final one.

Although the expression on Larson’s face after the race hardly disguised the discontent, he was stand-up in doing a live television interview and later addressing the gathered press.

The popular 25-year old Californian driver has – for the good or the bad, depending on how you look at it – gotten plenty of experience talking about his near-misses. And if history is a good indicator, he’ll be smiling one day and reflecting positively on the effort.

It should be duly noted that Larson has won five Cup trophies, including a rare Michigan Speedway sweep last year. And he won the Fall race at Richmond (Va.) Raceway where the series stops this weekend for Saturday’s Toyota Owners 400 (6:30 p.m. ET on FOX, MRN, SiriusXM NASCAR Radio).

And while Larson is still eager to hoist the first trophy of 2018, his overall statistics when it comes to being “so close,” are simply remarkable.

He has a pair of second-place finishes already this year. In four seasons (plus eight of the 36 races this year), Larson has 16 runner-up finishes. And counting. That’s an impressive 42 percent of his 38 top-five finishes.

Compare that to the 2016 Cup champion Busch, who had 14 runner-up finishes in his first five full seasons and 2014 Cup champion Kevin Harvick, who had 10 in that same time frame of his career. Seven-time Cup champion Jimmie Johnson holds the high mark among current drivers with 16 – a number Larson is poised to eclipse.

Overall, Busch has 43 career runner-up showings among his 167 top-five finishes – an amazing 25 percent. Since finishing second to Martin Truex Jr. in the 2017 Homestead championship finale, Busch has four runner-up finishes in the past nine races — 44 percent of the time he has finished second. Add in his two victories the past two weeks and that means six of his last nine races he’s finished either first or second (and actually, he has a third place in there too).

Harvick is another who has made headlines for his career podium finishes. His 10 runner-up finishes among 30 top-fives in his first five seasons is a remarkable statistic. And he leads all active drivers with 51 career second-place finishes – an impressive 29 percent of his top-five showings.

Perhaps, not too surprisingly, that certain seven-time champion leads all active drivers in quick starts – trophy hoisting and almost-trophy hoisting. Johnson’s 16 runner-up finishes in his first five Cup seasons were among 66 top-five finishes in that span.

He has 48 career runner-up finishes to add to his Hall of Fame 83 current victories – meaning Johnson has 131 first or second-place finishes among his 223 top-five tally or a staggering 58.7 percent.

So while Larson may understandably bemoan coming so close to a win. His early career is already comparable to some of the most accomplished drivers in NASCAR history. He’s in good company even if it’s not always in Victory Lane.

The four highest finishers in Friday night’s ToyotaCare 250 (7 p.m. ET on FS1, MRN, SiriusXM NASCAR Radio) will compete for the money at Talladega (Ala.) Superspeedway – the first time the program has included the always exciting 2.66-miler in its four-track incentive lineup. Dash 4 Cash concludes at Dover, Del. the following week.

None of the four drivers eligible to win the extra prize money this week have won previously at Richmond. Allgaier and Hemric came close, finishing second and third last year in this race. Hemric has the best overall average finish (3.5) among the four. Sadler has the most starts at the track (29).

What to Watch For: Among the active drivers, Jimmie Johnson is the only one to win back-to-back races (2007 sweep) at Richmond. Richard Petty set the all-time best streak, winning seven straight from 1970-1973. … Denny Hamlin has won the most Richmond pole positions (three) among active drivers. … This has been a tough place on rookies. None of the veterans on the grid Saturday won in their first try at Richmond. … Kasey Kahne is the only one in the lineup who scored his first Cup win here. … The winningest starting position is – the pole position. Twenty-four times the Richmond winner started first. … Clint Bowyer came from the farthest back on the grid to win, 31st place in Spring, 2008. … Four-time Richmond winner Kyle Busch has six more runner-up finishes here. All his victories have come in the Spring race – he won four straight from 2009-2012. … Kevin Harvick has won two of the four closest races in Richmond history. He beat Carl Edwards in 2011 by .139-seconds (third closest all-time) and he beat Kyle Busch in 2006 by .153-seconds (fourth closest all-time).

What to Watch For: Championship leader Elliott Sadler leads Daniel Hemric by six points heading into his native Virginia and leads the series in average finish (5.142), top-fives (five) and has finished in the top-10 in all seven races this season. He’s led the points standings for all but two weeks. Sadler has never won at Richmond however he’s finished eighth or better in 11 of the last 14 races there. … There have been seven different winners in as many races in 2018. A new winner Friday in Richmond would tie a mark (also set in 1998 and 2006) that is third best in the series all-time. In 1988 there were a record 13 different winners to open the season. …Daytona winner Tyler Reddick is the only racer entered this weekend with a victory already. … Joe Gibbs Racing welcomes Noah Gragson to the seat of the No .18 Toyota this weekend. The 19-year old Las Vegas native will make his series debut. He is a former Camping World Truck Series race winner. 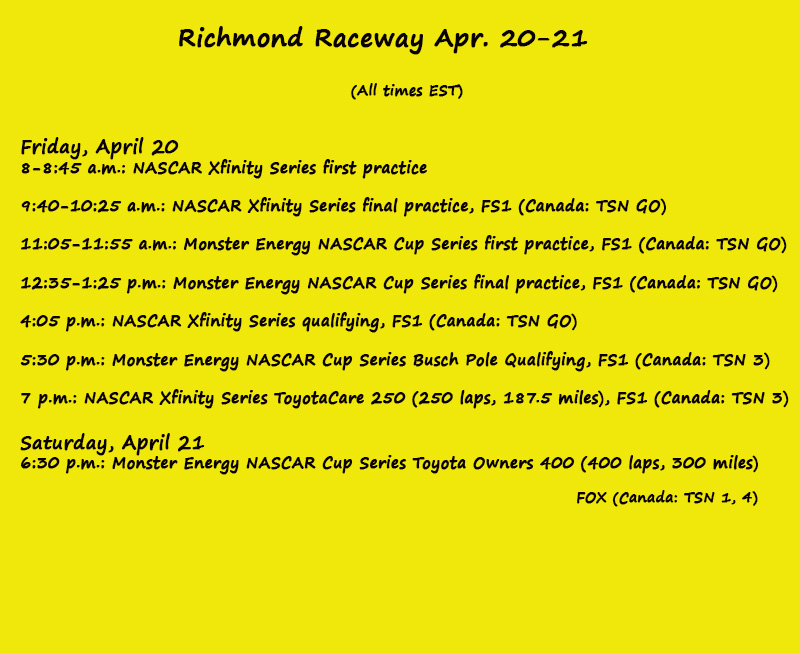