Deservedly so, there is a lot of buzz about the Monster Energy NASCAR Cup Series’ “Big 3” as Kevin Harvick, Kyle Busch and Martin Truex Jr. have been dubbed for their 15 combined wins through the opening 20 races of the season.

Truex is the reigning series champion and Harvick (2014) and Busch (2015) have hoisted the big trophy as well. With their dominating efforts there’s been a lot of buzz about how long they can carry on this effort. And it’s also raised deserving questions.

Which fellow members of the past-champion’s club will be next to win? And assuming these three advance all the way to the Homestead-Miami season finale with a shot at the title, who will be that fourth driver eligible to challenge for the Cup?

Seven-time champion Jimmie Johnson arrives for Sunday’s Gander Outdoors 400 at Pocono Raceway (2:30 p.m. ET, NBCSN, MRN, SiriusXM NASCAR Radio) as prepared as ever to snap a career-long winless streak and more importantly guarantee his position in the upcoming playoffs. He has three Pocono wins, but the last came in 2014 and he’s only led two laps of competition there since.

Johnson is ranked 14th in the playoff standings right now – 53 points behind 13th-place Aric Almirola and with only a precarious two-point edge over his Hendrick Motorsports teammate Chase Elliott. Their teammate Alex Bowman is 16th and in the final transfer spot.

Kurt Busch, the 2004 Monster Energy champion, also has three wins at Pocono, the last coming in 2016. And similar to Johnson, he hasn’t led a lap since that victory. The driver of the No. 41 Stewart-Haas Racing Ford does have seven top 10s in the last 11 races at the Tricky Triangle, but was 19th in June. Busch is ranked a solid eighth in the playoff standings and brings two top-10 finishes in the two races prior to Pocono.

Brad Keselowski is in playoff-prepared form points-wise, minus that automatic berth from a victory. In fact, in the seven previous seasons, the Team Penske driver had already hoisted a trophy by this point on the calendar. He seems perpetually ready to do so this season, just hampered by some uncharacteristically bad fortune of late. In the last four races, the 2012 series champ has two top-10 finishes and two finishes of 30th or worse.

The good news is he was fifth at Pocono last month and led 10 laps. He has a perfect six top-five finishes in the last six races at the track, including runner-up efforts in this particular race in 2015 and 2016.

The U.S. Cellular 250 at Iowa Speedway (Saturday, 5 p.m. ET, NBCSN, MRN, SiriusXM NASCAR Radio) presents a historic opportunity for the NASCAR Xfinity Series. There have been eight different winners in the last eight runnings of this race. And the only previous winner entered on Saturday is also the most recent winner, Justin Allgaier, who won here in June.

Allgaier’s JR Motorsports teammate Elliott Sadler, who is now third in the points standings, would love to snap a 57-race winless streak with a victory in Iowa. He boasts the top average finish (7.40) among those seeking their maiden win at the track.

Should Allgaier win, it would mark the first time in his career he’s scored a season sweep at a venue.

Two-time NASCAR Camping World Truck Series champion Matt Crafton would love to score his first career win at Pocono Raceway in Sunday’s Gander Outdoors 150, not just to become a new winner at the track, but to snap a 25-race winless streak. He hasn’t gone winless in a season since 2012.

Crafton has five top-10 finishes in eight Pocono races, including a career best third-place showing in his first race there in 2010.

What to Watch For: Since this race in 2010, June winner Martin Truex Jr. is the only active driver with multiple victories here (2015 and 2018). … Retired driver Dale Earnhardt Jr. is the last to win back-to-back Pocono races (he swept the 2014 season). … Denny Hamlin won back-to-back races twice – sweeping the 2006 season and winning in 2009 (2nd race) and 2010 (1st race). … In the last 12 Pocono races, Chevrolet leads all manufacturers with seven victories, including six consecutive wins (2012-15). Kurt Busch was the last to win in a Chevy in 2016. … Pocono is one of only two tracks on the schedule where Kevin Harvick has never won a Cup race. He also has never won a pole position there. … Four-time race-winner Denny Hamlin boasts the best driver rating (104.0) at Pocono. He leads the series in laps led (688) and fastest laps run (458) at the Tricky Triangle. … Hamlin and Carl Edwards are the only two drivers in Pocono’s long NASCAR history to win in their first start there. … A front row starting position has produced the most winners (31 percent). … Edwards’ win in 2005 from the 29th starting position is the deepest in the field a winner has come. … Kurt Busch leads all active drivers with five runner-up finishes. Harvick is second with four. … In the era of electronic scoring, Rusty Wallace’s 0.126-second win over Jeff Burton in July 2000 is the closest Margin of Victory.

What to Watch For: There was big movement atop the points standings following last week’s race at New Hampshire Motor Speedway. Daniel Hemric now leads rookie Christopher Bell by six points and previous championship leader Elliott Sadler by seven points. The regular season champion earns an automatic bid to the playoffs. … Defending Iowa winner Justin Allgaier is looking to become only the second driver in the race’s history to win consecutive races. Two-time series champion Ricky Stenhouse won back-to-back races in 2011-2012. … Allgaier led 182-of-250 laps en route to his win last year – the most laps led by a winner since Sam Hornish Jr. one-upped him (183 laps led) in his June 2016 victory. … There have been eight different winners at Iowa in the last eight races. Allgaier is the only former winner entered this week. … There will be two Iowa natives on the starting grid – Joey Gase (of Cedar Rapids) and Michael Annett (of Des Moines). … Last year’s race runner-up Kyle Benjamin will get another shot at the win, driving for Joe Gibbs Racing. The No. 18 Toyota he will drive this week was driven last year by race winner Ryan Preece. … Six drivers have won their career first pole position at Iowa, including Austin Cindric earlier this season. … Three drivers claimed their first series victory at the track, including Preece (2017), William Byron (2017) and Stenhouse (2011).

What to Watch For: The defending race winner is Christopher Bell, who will instead be competing in the Xfinity Series in Iowa on Saturday afternoon. … Kyle Busch returns to truck competition for the first time since May at Charlotte. He has one win in three Pocono starts. … Busch is the only previous winner entered this weekend. … Eight drivers will be making their Pocono debuts, including: Todd Gilliland, Myatt Snider, Robby Lyons, Dalton Sargeant, Josh Reaume, Bo LeMastus, Bayley Currey, Ray Ciccarelli, Tanner Thorson and Timmy Hill. … Noah Gragson carries an eight-race top-10 streak into Pocono, including a career best two wins. The 20-year-old finished 24th last year, crashing out in his only Pocono start. … Myatt Snider leads the talented group of Sunoco Rookie of the Year contenders with five top 10s in 13 races. His best finish was fourth at Gateway Motorsports Park and he is currently one position out of playoff contention with three remaining to set the playoff field. 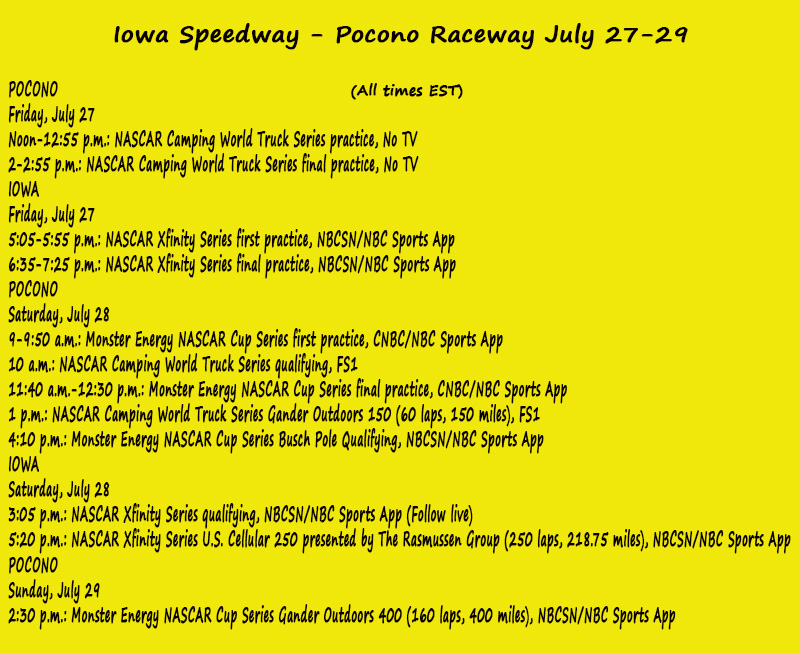