With a pole position and third-place finish at Michigan two weeks ago – and five top-10 efforts in the last six races of the season – it feels inevitable that Kurt Busch is on the verge of hoisting his first trophy since the 2017 Daytona 500.

And Sonoma Raceway’s winding and picturesque Northern Californian hillside road course is a promising opportunity for the former Monster Energy NASCAR Cup champ to claim his first win of the 2018 season.

The Toyota/SaveMart 350 (June 24 at 3 p.m. ET on FS1, PRN, SiriusXM NASCAR Radio) has been a historically favorable event for the Stewart-Haas Racing driver, who won there in 2011 and whose 197 career laps led is most in this week’s starting field.

Busch’s driver rating (107.5) is also easily tops among his competitors. Jimmie Johnson is next at 99.6. In all, Busch leads five of the six statistical categories ranking drivers at Sonoma including Average Running Position (9.9), Fastest Laps Run (88) and Laps in the Top-15 (78.6 percent) as well.

It was an immediate good relationship between driver and course.

“I really enjoyed it right off the bat,” said Busch, who drivers the No. 41 Ford for SHR. “I thought it was fun and different and I worked at it to develop the skills that I have in Legends Car races and Late Model races. I even went to the Bob Bondurant Driving School.

“My first professional type of road-course race was in the Truck Series. I jumped right in there. (Greg) Biffle won that day and I beat Ron Fellows.”

Succeeding on NASCAR’s two traditional road courses – at Sonoma and Watkins Glen, N.Y. – takes both good skill and good attitude. Often times early in the sport’s history, drivers “tolerated” the non-oval races. These days, they embrace the change in course. Sonoma has had 10 different winners in the last 11 races, with Kurt’s younger brother Kyle Busch the only multiple winner (twice) in the field.

“If you’re a good driver and you want to be in the top tier of NASCAR, you’ve got to drive well everywhere,” Kurt Busch said. “The road courses were a bit more of a specialty back in the day and you used to be able to take advantage of the guys who didn’t put forth the full effort in the road courses, but not anymore.”

“I love road racing and I think it’s fun. It’s important to have a positive mindset everywhere, but it’s not a problem for me at the road courses.”

And his results would prove as much.

He and SHR teammate Clint Bowyer lead all drivers with seven top-five finishes at Sonoma. Busch won pole positions at both road courses in 2006. He has led laps in four of the last seven races at Sonoma, highlighted by his 76-laps out front en route to his win.

This week’s NASCAR Camping World Truck Series race presents another prime opportunity for the series’ youth movement to hoist a trophy. The slate of most recent winners at Gateway Motorsports Park is a group of 20-somethings who have made a real name for themselves in the sport.

John Hunter Nemechek is the defending winner of Saturday’s Villa Lighting delivers the Eaton 200 presented by CK Power (June 23 at 8:30 p.m. ET on FS1, MRN and Sirius XM NASCAR Radio). He won at the age of 20. Before that Christopher Bell won in 2016 (then 21), Cole Custer in 2015 (then 17) and Bubba Wallace in 2014 (then 20) celebrated important career victories there before moving onto new opportunities in the Xfinity and Monster Energy NASCAR Cup Series.

What to Watch For: There have been 11 different winners in the last 12 races at Sonoma. Current championship leader Kyle Busch is the only repeat winner in that time. And he is the only multi-time (twice) winner in the field this weekend. … Kevin Harvick is the defending race winner. The only driver to win consecutive races was Jeff Gordon, who won three straight from 1998-2000. …Four of the last 10 race winners – Tony Stewart, Carl Edwards, Juan Pablo Montoya and Jeff Gordon – are no longer competing in the Cup series. …. The four 2018 season multi-race winners – Kyle Busch, Harvick, Martin Truex Jr. and Clint Bowyer – are also the four most recent active drivers to win at Sonoma. …. Kurt Busch has led the most career laps (196) among the starting field this weekend. … The driver who has led the most laps has not gone on to victory in the last four races. … There are only seven former Sonoma winners in the field. … New NASCAR Hall of Fame selection Jeff Gordon is NASCAR’s winningest road racer with nine victories. Kyle Busch leads current drivers with four career wins – two at Sonoma and two at Watkins Glen. … Jamie McMurray leads the series with three pole positions at Sonoma. … Juan Pablo Montoya is the only driver to have scored his first Cup win at Sonoma (2007). …. The Sonoma Raceway holds a unique distinction. No race has ever been postponed or shortened nor qualifying cancelled because of poor weather. … The front row of the grid has produced the most winners (28 percent). The race winner has started from a top-five position on the grid 52 percent of the time.

What to Watch For:  John Hunter Nemechek is the defending race winner and the only race winner entered this week. He won at the age of 20 last year, the latest in a line of youthful production at Gateway. … Of the three immediately preceding winners, Christopher Bell was oldest – winning at 21 two years ago. Cole Custer was only 17 when he won in 2015. … Last week’s pole winner at Iowa, Harrison Burton, 17, scored a career-best showing of third-place. His next scheduled race is Aug. 16 at Bristol, Tenn. … There are 11 drivers making their track debut this weekend, including last week’s winner Brett Moffitt – who has two wins in 2018 already.  … Points leader Johnny Sauter is still looking for his first Gateway win, but he has never finished worse than fourth in six starts. He was third in the race last year. … Another veteran and former champion Matt Crafton is also looking for his first Gateway trophy. His fourth-place finish last year was a career-best and one of only two top fives in 14 starts at the track. … NASCAR Next driver Zane Smith will make his series debut this week. The 19-year old Californian will drive the No. 54 Toyota Tundra. He is a three-time winner in the ARCA Series this year. 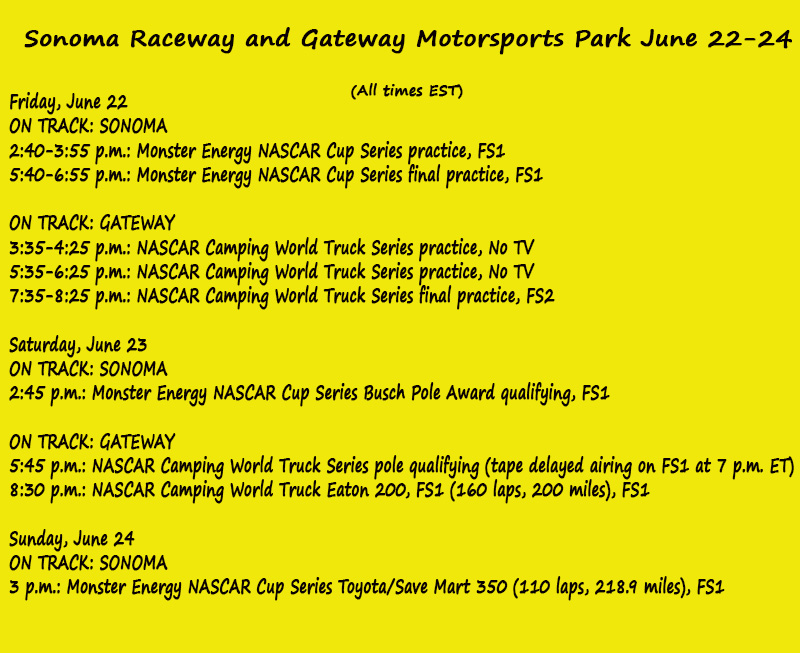