Most people figured a Busch would be in victory lane at Bristol Motor Speedway Saturday night.  Few expected it to be Kurt Busch.

The elder Busch brother broke a 58-race winless streak by holding off Kyle Larson in the closing laps to win the Monster Energy NASCAR Cup Series Bristol Night Race. It was his first win since his Daytona 500 triumph last season.

Busch won five of his first 11 Bristol starts, but hadn’t won here since 2006.

“We now have won six times here and I have great teams that have always helped me win,” Busch said.  “This group of guys, Billy Scott, my crew chief, this is his first win and to be able to do it with Ford and Monster and Haas Automation is just what it’s all about is executing as a team and we had good restarts when we had to, and then you’ve got to get clever and start throwing everything at it.”

Fitting that the race itself seemed to have all the action those older races are remembered for.

The carnage started on lap 2 when favorite Kyle Busch who started third, got loose, made contact with Ryan Blaney and spun in front of the field. Busch’s Toyota was t-boned on the driver’s side, but he was able to continue.

Busch would fall two laps down but didn’t give up. Faster than the leader, Busch made up those two laps and by lap 282 was back on the lead lap in 19th and a furious battle to get the free pass spot with Kevin Harvick he had been forced to pit under green for a flat tire earlier. He would fight his way to sixth by lap 383 and was third on lap 432 when he made contact with second place runner Martin Truex Jr. sending Truex hard into the wall and ending the race for Truex.

On a restart on lap 477, Busch was in a three-wide battle for fourth when he was pushed into the outside wall. A left rear tire went down soon after and Busch ended up spinning on the frontstretch. He was pushed back to the pits but finished the race in 20th three laps down.

“We probably finished where we should have anyways with as torn up as our race car is,” Kyle said. “We had a shot to be able to come back there and win the race realistically. If it wasn’t for getting mixed up with the 37 (Chris Buescher) and the 48 (Jimmie Johnson), if I could have got clear of them, I think I could have got to the front. But Monday morning quarterback also says that if we would have inherited fourth and not pitted on that last pit stop then we might have been ahead of all that. I don’t know, we were certainly going to way overachieve tonight, but we just didn’t get to.”

Big brother Kurt suffered damage in that first accident hitting a slowing car in front of him. His crew was able to effect repairs and Kurt was in contention all night. 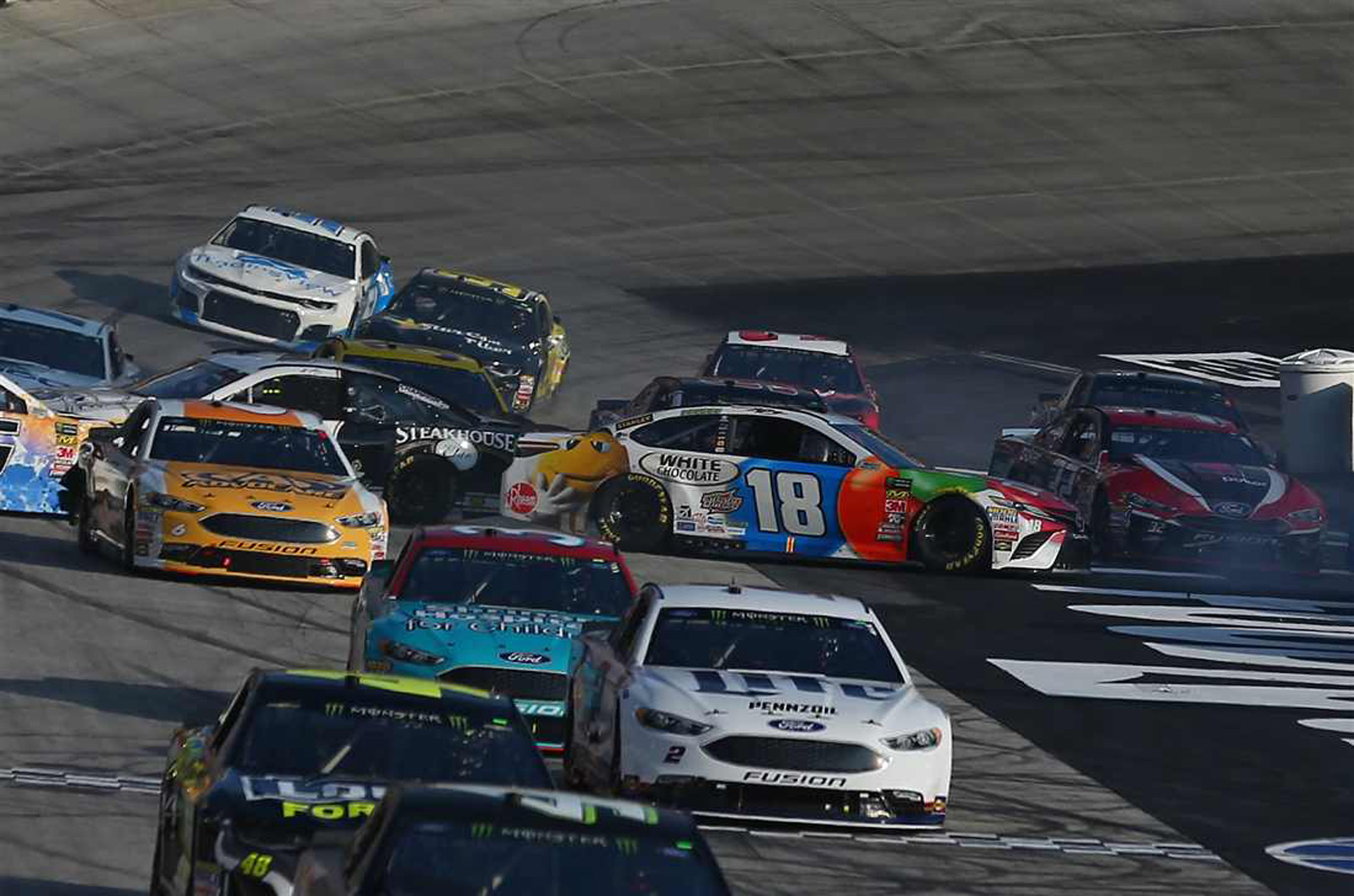 He took the lead for the final time on the restart after his brother’s spin and held that lead over Kyle Larson, who had pitted under the final yellow while Kurt stayed out.  Larson tried to close the gap in the final circuits but came up short.

“I think if I had a better car, tires probably would have showed what they are really capable of,” Larson said. “This was just a really frustrating day. Our DC Solar Chevy was not very good from lap 1 to lap 500 there, but we fought and got a second place finish out of it. So, I was happy about running second, but just disappointed because I had a lot of confidence going into this race and thought our car was really good. But, we were probably a 12th to 15th-place car, I thought.”

Clint Bowyer, who led 120 laps, most in the closing laps, was shuffled back on the final restart and on older tires had to settle for sixth.

“I just clearly didn’t do a good job on the restarts,” Bowyer said.  “When I had the lead I thought I got a good jump and about the time I shifted Kurt hit me in the door and it just lit the tires up.  He didn’t do anything wrong, it’s just a product of it.”

Ryan Blaney who had damage from the first accident led a race high 121 laps and won Stage 1. He also smacked the wall late and held on for seventh.

“We just struggled as the track got colder and rubbered in,” Blaney said.  “I was really happy with our car in the first stage, but we just kind of lost it from there.  It was a decent comeback for us.  We were gonna restart sixth and the 48 pitted and that kind of hurt us, but it was a decent night.”

For the “other” Busch the unexpected win puts him in playoff contention. And facing a somewhat uncertain future with no contract for 2019 the elder of the Busch brothers showed he still has what it takes.

“It just matters to win,” Kurt said.  “It’s all about winning.  I’m glad we did.  We’ve been the most consistent team this year that hasn’t won.  I wasn’t worried about not making the Playoffs, so we could kind of treat these races coming up as free-for-alls, and we’re just gonna keep going after it.  The Southern 500 is after this week off and we’ve got Indianapolis and then my hometown kicks off the Playoffs, so we’re all about these next 12.”

After the final off week of the season, the Monster Energy NASCAR Cup series heads to Darlington Raceway and the Southern 500 on Sept. 1.