There will be a great deal of on-track action when the 2022 NASCAR season gets underway in Los Angeles in February.

Tuesday NASCAR announced that the first-ever Clash at the L.A. Coliseum will be a two-day event with practice, heat races and a last-chance qualifier, culminating with a 150-lap main non-points event on Feb. 6.

The field will be open to 40 entrants, and 23 will make the final show on Sunday night under the lights. 36 of those entries will come from teams guaranteed starting spots during the season via a charter.

“There has already been an enormous amount of buzz around next year’s Busch Light Clash at the Coliseum, and we feel that this race format and the accompanying programming throughout the entire weekend will only build on that already established momentum,” said Ben Kennedy, NASCAR senior vice president of strategy and innovation. “The unprecedented nature of this event, coupled with the fact that our sport will be in the spotlight in the middle of downtown Los Angeles, makes this a can’t-miss event when we get our 2022 season underway next February.”

The top four finishers in each heat race — 16 total cars ­— will automatically advance through to the Clash later in the evening. The winner of the first heat race will start on the pole, with the outside pole going to the winner of the second heat race. 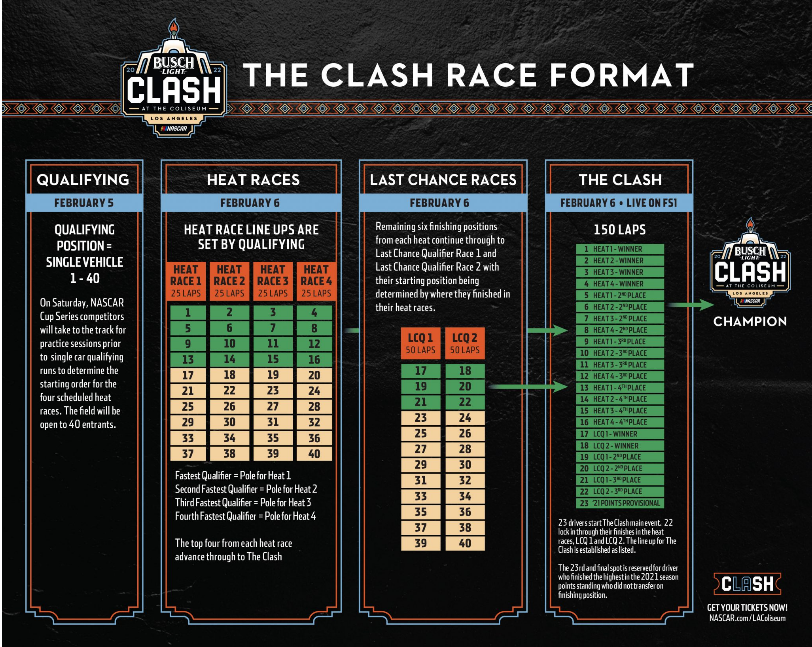 The winners of heat races three and four will make up the second row. The remaining order for the 16 cars will be filled out in the same manner.

The last heat races will be last chance qualifiers. Each heat race has 10 cars, with four automatically advancing to the main event. That leaves six cars from each heat race, or 24 total cars, not advancing.

All 24 of those cars will advance to two ensuing 50-lap Last Chance Qualifying races.

The starting order for each LCQ is based on finishing positions in the heat races, with the remaining field from heat races one and three racing in the first LCQ event. The second LCQ race is comprised of cars from heat race two and four.

The top three finishers (six total cars) in both Last Chance Qualifying races will advance to the Clash, filling out positions 17-22 of the 23 available positions.

The final spot is reserved for the driver who finished the highest in the 2021 points standings who does not transfer on finishing position in the heat races or Last Chance Qualifying races. So, in essence, that means 2021 champion Kyle Larson is the only driver locked into the field.

“I’ve had the chance to drive on the track through iRacing and make some laps in the NextGen car at Bowman-Gray on a similar layout, and there’s no doubt that this race is going to be awesome,” said Clint Bowyer, longtime former NASCAR Cup Series driver and current FOX Sports analyst. “The different qualifying events and format for the Clash are only going to add to what will be an unforgettable weekend. This is definitely a race you’re not going to want to miss.”