The new branding includes not only a new name but a new logo as well and a change to the team’s iconic No. 6 mark which new co-owner Brad Keselowski will run in 2022. The new name and logo add Keselowski to the ownership group that includes team founder, and NASCAR Hall of Famer Jack Roush and the Fenway Sports group.

Keselowski left Team Penske this season after a 12-year run that included a Cup series title in 2012. He previously owned Brad Keselowski Racing a team that scored 11 Truck series wins between 2008 and its final year 2017. That was the same year as the last win in the Cup series for Roush which has struggled since then.

Keselowski will driver the No. 6 Ford in 2022 replacing Ryan Newman.

“All of us are super excited about what we have going on here, but with that we want to first acknowledge where we’ve been,” Keselowski said. “The 6 car has been in this sport now for almost 30 years or just past 30 years with Jack Roush and I think you see this car.  It plays some homage to the 6 logo.  It’s inspired by the original 6, which means a lot to me with Mark Martin and what he’s done to get this company started as a driver, so I want to make sure we acknowledge him today. 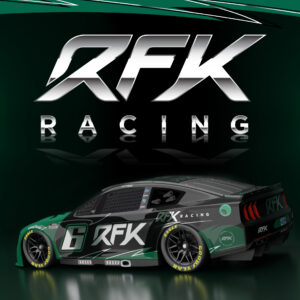 “But that passion that started this team is the DNA that will live on to me forever and that we aim to have, so it’s with that DNA that we’re reinvigorating and trying to find that next step and making the commitment to the future because we believe and I believe in the future of NASCAR, and so there’s a heavy emphasis on where we’re going.”

The rebranding goes beyond simply logos. The team is changing its structure from the ground up in hopes of becoming as competitive as it once was. Team President Steve Newmark likens it to “Roush 3.0.” The team made its debut in 1998, became Roush Fenway in 2007 and will now be known as RFK Racing.

“It is a new day,” Newmark said. “We’ve got a lot of energy and changes coming for who we are.”

RFK Racing will field two NASCAR Cup teams in 2022, with Keselowski taking part ownership in the team, while piloting the team’s No. 6 Ford Mustang. Chris Buescher returns to pilot the No. 17 Ford. The team announced earlier this month that veteran crew chief Matt McCall will call the shots for Keselowski and the No. 6 Team.

Scott Graves will lead the No. 17 team and Buescher in 2022. The duo of Buescher and Graves combined to win the 2015 NASCAR Xfinity Series championship and were paired together again with five races remaining in the 2021 season, scoring three finishes of 12th or better, including a pair of top 10s and a third-place finish at the Charlotte ROVAL.

“I want to continue the dream of being competitive in NASCAR is certainly something I’ll stand on the balls of my feet to help as much as I can as long as I can,” said Jack Roush. “I’ve been besieged by questions over the last decade of what my plan was for retirement, and I really couldn’t see how I was gonna be able to back away from it without having the kind of approach that Brad has brought and Steve Newmark has fostered, and that the guys that are part of our organization now all signed up for.

“I’ll be able to back away some and to not go to all the races and not be the first one on top of the pit box and the last one in my car to go home as I’ve been in the past for most of my time.  I enjoy passing the baton to Brad.

“Steve questioned me if I was really willing to do that and I said, ‘Well, as long as I can keep one hand on it for a while it will work for me.’  We look favorably going forward with what we can do and certainly the enthusiasm that I’ve felt when we were a young race team I feel again and look forward to helping the people that have not won their championships and not won their races and not won Daytona and not won the World 600, I look forward to celebrating those with the rest of the team that has yet to build their legacy as we go forward”