NASCAR and Charlotte Motor Speedway announced the format and competition package for the May 19 Monster Energy NASCAR All-Star Race Wednesday. There are dramatic changes to the aero package that will be used in the non-points race which NASCAR hopes will increase passing.

In a somewhat historic first, the Monster Energy NASCAR Cup Series cars will use the competition package used in last season’s NASCAR Xfinity Series race at Indianapolis Motor Speedway including the use of a restrictor plate for the first time at the 1.5-mile Charlotte Motor Speedway.

In addition to the restrictor plate, each of the cars will have aero ducts, a six-inch-high spoiler with two 12-inch ears and the front splitter used in the 2014 package.

According to NASCAR these changes will create a unique aerodynamic effect, and the series hopes more passing and competition.

“NASCAR is committed to innovation and will always work to improve the racing product for every series and venue,” said Steve O’Donnell, NASCAR executive vice president and chief racing development officer. “The yearly Monster Energy NASCAR All-Star Race is an opportunity to see your favorite drivers compete under a unique and exciting format and rules package. The positive feedback following last year’s Xfinity Series race at Indianapolis gave us the foundation to implement this dynamic package for the All-Star Race. We believe the hard work of the entire industry will provide the best race for our passionate fans.”

The format for the annual non-points event will include four stages – 30 laps, 20 laps, 20 laps and 10 laps. Only green flag laps will be counted in the Final Stage. Normal stage break procedures will be in effect, with one addition: NASCAR Overtime will be in play for all stages. In addition, there will be no mandatory pit strategy as in some of the previous editions of the event.

“I’ll be as interested as anyone to see how restrictor plates do in the All-Star Race,” former All-Star winner turned Fox NASCAR analyst Darrell Waltrip said.  “We know they will slow the cars down on the straightaways, but I’m not sure about the corners.  I think back to New Hampshire when NASCAR issued restrictor plates, and I wonder if a team will figure out a setup and stink up the show. But I love the fact this is like a big R&D project where teams can throw whatever they want at it.  We’ll see what the results are, and if they’re good, we may do it again.  If they’re not, then NASCAR probably will scrap the idea for the future. One thing is certain – when they’re racing for $1 million, teams will give it their best shot.”

The Monster Energy Open will be three stages set at 20, 20 and 10 laps respectively. Each stage winner will advance to the evening’s main event.

As for if this package might be seen again in a Cup points race, former crew chief Larry McReynolds doesn’t expect it will.

“I don’t know if it would be used again in 2018, even if it’s a raging success, but if it turns out well, it would be advantageous to try it at any track a mile-and-a-half or two miles in length,” McReynolds said. “It may not improve the on-track product, but it certainly won’t make it worse. I’d like to see NASCAR give it a shot at a track like Pocono or Michigan this year if it performs well in the All-Star Race, because those tracks aren’t in the Playoffs. Maybe even Indianapolis. But we’ll see what we get in a few weeks at Charlotte.”

The Monster Energy NASCAR All-Star race at Charlotte Motor Speedway will be on Saturday, May 19, starting at 6 p.m. ET on FS1, MRN and SiriusXM NASCAR Radio. 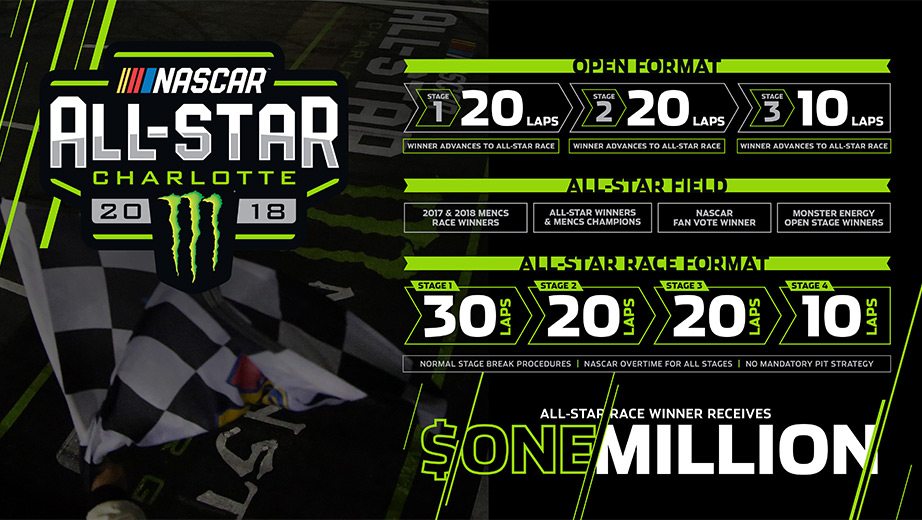