The NASCAR racing at the Bristol (Tenn.) Motor Speedway half-mile is innately exciting, challenging and must-see TV. And if you ask the drivers, it’s a real skill set that is important to master.

Some competitors seem to fall into it naturally. For others, it’s a work in progress.

It’s been five years – 10 races – since someone has won twice consecutively at Bristol. Penske Racing driver Brad Keselowski did so in the Fall of 2011 and the Spring of 2012 – his Monster Energy NASCAR Cup championship season.

The last five races at the track have been won by: Joey Logano, Carl Edwards, Kevin Harvick, Jimmie Johnson and Kyle Busch – in a Ford, Toyota, Chevrolet, Chevrolet and Toyota, respectively.

But there are some definite short track trends to consider when sizing up Sunday’s Food City 500 at Bristol (2 p.m. ET, FOX, PRN, SiriusXM NASCAR Radio).

Counting the three Spring time short track stops – at the half-mile Martinsville Speedway the series raced two weeks ago, the Bristol half-miler this week and the .75-mile Richmond Raceway the series moves to next week, there are only three current drivers with multiple Spring wins in the last five years.

Defending winner of the Food City 500, Jimmie Johnson has two victories as does Logano and Kurt Busch.

Kyle Busch, who won in the Fall at Bristol, leads all current drivers with five first or second place finishes at the three Spring-time short track stops. And 2018 Martinsville winner, Clint Bowyer and defending Bristol winner Johnson are next with four finishes of first or second in the Spring.

It’s Logano that tops everyone with top-five finishes. He has eight, compared to Kyle Busch’s seven. Keselowski, Johnson and Harvick have collected six top-five finishes during that five-year springtime race span.

Kyle Busch is unquestionably the current master of Bristol Motor Speedway. He’s led twice as many laps (2,116) as any other current Cup driver there and his six victories is tops as well among active drivers.

Interestingly the two Busch brothers – six-time winner Kyle (2,116) and five-time Bristol winner Kurt (1,062) have combined to lead 3,178 total laps at the track. They are the two most prolific Bristol race leaders among current drivers.

Here’s what three of Bristol’s most prolific winners have to say about racing the famously tough circuit.

“Your comfort level has to be high at Bristol, which means the car has to be a little on the snug side – it’s a fine balance where you have an edgy car and you are comfortable enough to be the aggressor.

“It takes a lot out of you both mentally and physically. It’s the most physical track we run and having to stay sharp for four hours with guys banging on your bumper for 500 laps – it’s just tough.”

“I don’t think you’ll ever see seven in a row at a particular racetrack again, but I could be wrong. Deep down, I would like to say that I could do it, but I know that, even with the team I have and the crew and the talent and everything we’ve got going on with the Skittles car, that’s going to be hard to do.”

This weekend marks the first opportunity for an Xfinity Series driver to earn the big $100,000 bonus payment as part of the popular Dash 4 Cash program.

The top-four finishing Xfinity Series regulars from last week’s race at Texas Motor Speedway are competing in the opening round of the incentive program this Saturday afternoon.  Cole Custer (Stewart-Haas Racing No. 00 Ford), Daniel Hemric (Richard Childress Racing No. 21 Chevrolet) and Joe Gibbs Racing drivers Ryan Preece (No. 18 Toyota) and Christopher Bell (No. 20 Toyota) are eligible as the highest finishing series regulars from last week at Texas.

The best finisher of those four qualified drivers at Bristol will receive a $100,000 prize. And the top four Xfinity Series regular finishers at Bristol will be then be eligible for the next Dash 4 Cash race, April 20 at Richmond (Va.) Raceway. The program continues at Talladega (Ala.) Superspeedway on April 28 and May 4 at Dover International Speedway.

What to Watch For: … Reigning champion Martin Truex Jr.’s last place finish at Texas last week (a result of a crash) snapped an impressive record at 1.5-mile tracks. He had entered the race with five consecutive top-five finishes and 10 straight top-10 finishes at 1.5-milers. He is winless in 24 tries at Bristol. …. Kyle Busch won all three NASCAR races at Bristol last Fall – the Camping World Truck Series, Xfinity Series and Monster Energy NASCAR Cup Series – the second time he’s swept a venue. And he is the only driver in NASCAR history to ever win three national races in one weekend. … Hendrick Motorsports driver Chase Elliott has three top-10 finishes in four Bristol Cup series starts. … In the last four races, 20-year old William Byron has moved up six positions in the points standings and is now ranked 18th, one position ahead of fellow Sunoco Rookie of the Year candidate Darrell “Bubba” Wallace. …Both of Jimmie Johnson’s Bristol wins have come in the Spring. His first in 2010 was part of a six-win tally that lifted Johnson to a record fifth consecutive Cup championship. … Stewart-Haas Racing driver Kurt Busch needs to lead only nine laps Sunday to become the 21st driver to lead 9,000 laps in his Cup career. He’s led 1,062 laps at Bristol alone. And his win there in March, 2002 (his third start at the track) marked the first and only time a driver has won at Bristol in fewer than four attempts.

What to Watch For: … Cole Custer, Daniel Hemric, Ryan Preece and Christopher Bell are eligible for the Dash 4 Cash this weekend at Bristol. The highest finishing of the four drivers will win a $100,000 from Comcast. … Veteran Elliott Sadler leads the championship for the fourth consecutive week. He has an 11-point edge over JR Motorsports rookie teammate Tyler Reddick. Sadler is on a run of six straight single-digit race finishes in 2018. He scored his first career Cup Series win at Bristol (2001) and owns a pair of Xfinity Series trophies as well (1998 and 2012) and his 214 laps led is best among Saturday’s field. … JR Motorsports’ Justin Allgaier scored his first Xfinity Series win at Bristol in 2010. He is fifth in the championship, five points behind teammate Sadler. … It’s been six years since Ryan Truex’s last Bristol Xfinity Series start. He finished seventh in 2012. …Former series champion Joe Nemechek will drive for JD Motorsports at Bristol. 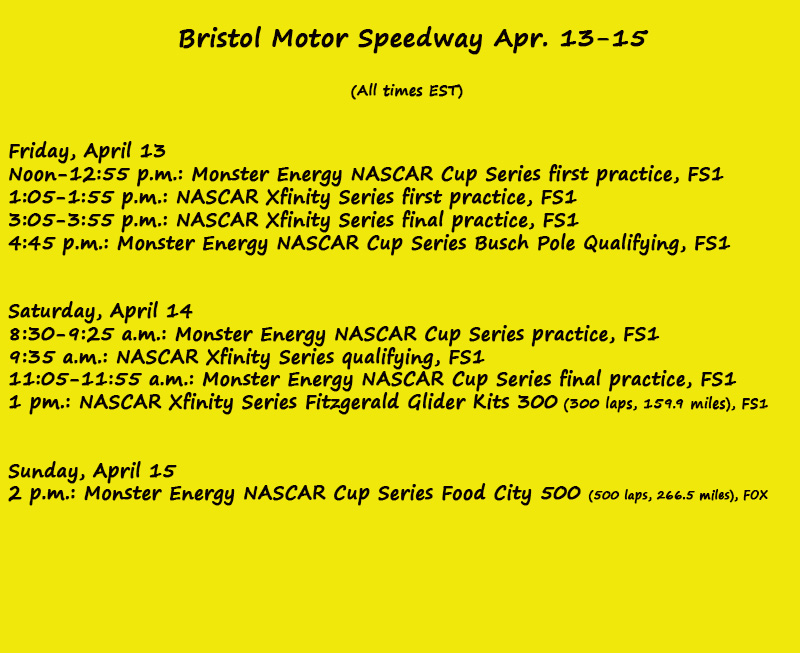