Blaney has moved from the Wood Brothers to Team Penske this season, driving the No. 12 Ford. It’s often been a season of all-in or all-out for the young and hugely-popular talent – who has three top-five and six top-10 finishes through the opening 13 races of the season. These are high marks he is expected to easily exceed, considering he had career best four top-fives and 14 top-10s all of last year and is already close to surpassing those numbers only a third of the way through 2018.

He led a race best 118 laps in the season-opening Daytona 500 and finished seventh (he won the first Duel as well), and Blaney’s overall work was enough to earn him the No. 1 position in the standings after the race – a career high ranking for him and an ideal way to kick off his tenure with the championship Penske team.

Blaney impressively stayed among the top-three in the championship standings through the early season– leading 145 laps and finishing a season-best of third at Martinsville.

A crash at the always-tough Bristol Motor Speedway in mid-April interrupted the fast start. And he’s had two more DNFs since – in the last two races (at Kansas and at Charlotte on Sunday night).

So he comes to Pocono – where he has three finishes of 11th or better in four Cup starts – ready to right the ship, defend his first career victory and add to the win total; goals everyone in the sport fully expects Blaney to meet.

The NASCAR Xfinity Series will mark its third race at Pocono Raceway with what is anticipated to be an exciting technical package on its cars. The series will use the same aero package that was so successful at Indianapolis Motor Speedway last year setting records for green flag passes for the lead (29) and lead changes (16).

The cars will have a bigger splitter and spoiler, specially designed aero ducts and restrictor plates on the 2.5-mile three-turn historic track and the expected outcome is even closer racing and more passing.

Neither of the race’s first two winners – Kyle Larson (2016) and Brad Keselowski (2017) will be competing this week’s Pocono Green “250” Recycled by JP Mascaro & Sons (Saturday at 1 p.m. ET on FS1, MRN and SiriusXM NASCAR Radio) ensuring a new winner with the car’s new package.

Veteran Elliott Sadler maintains the championship lead that he’s held most of the year but is looking for his first win at Pocono in the Xfinity Series. He does have good history at the track, however, as the inaugural Camping World Truck Series race winner at Pocono in 2010.

What to Watch For: Since 2006, Denny Hamlin is the winningest driver at Pocono with four wins – a season sweep in 2006 and back-to-back wins in 2009-2010.  … Kurt Busch (2006, 2007, and 2015) and Jimmie Johnson (2004 sweep, 2013) each have three victories. …There have been six different winners in the last six Pocono races including two first-time career victories – Chris Buescher in 2016 and defending race winner Ryan Blaney in 2017. … Five drivers among the top-10 in the standings have not won yet this season. Kyle Busch (4) and Kevin Harvick (5) have nine wins in the first 13 races of 2018. … Reigning Cup champion Martin Truex Jr., Brad Keselowski, Ryan Blaney and Paul Menard all have three DNFs, the most among drivers ranked in the top-20. … Race winners have started from the front row 31 percent of the time at Pocono. … Carl Edwards won this race from the farthest starting spot on the grid (29th) in 2005. … Kurt Busch has three wins at Pocono but also leads all active drivers with five runner-up finishes. … Kurt Busch and Jimmie Johnson lead all active drivers with 19 top-10 finishes. … Matt Kenseth needs only one more victory to tie his good friend, Mark Martin in 19th place (40 wins) on the all-time series wins list. … Johnson needs to lead 337 laps to reach 19,000 career laps led and become only the ninth driver in history to accomplish that. …. Only seven drivers in history have swept a season’s two races at Pocono. Johnson (2004) and Hamlin (2006) are the only active drivers to do so. … Hamlin (four), Johnson (three), Kurt Busch (three) and Kasey Kahne (two) are the only drivers with multiple wins at Pocono.

What to Watch For: Veteran Elliott Sadler is still looking for his first victory of the season but his consistent work has earned him a 48-point edge over second place Christopher Bell in the standings. Tyler Reddick sits third only seven points behind Bell. And Daniel Hemric trails Reddick by only two points. … Popular driver Kaz Grala will make his second start for Fury Race Cars team at Pocono. He finished 10th in the team’s Xfinity Series debut at Charlotte last week. … Sadler is the only series regular to score top-10 finishes in both of the Xfinity Series races at Pocono. … No series regular has won at Pocono. Kyle Larson in 2016 and Brad Keselowski in 2017, however neither is entered this week. … Cup drivers Kyle Busch, Paul Menard and Chase Elliott are scheduled to compete in the Pocono Xfinity Series race. 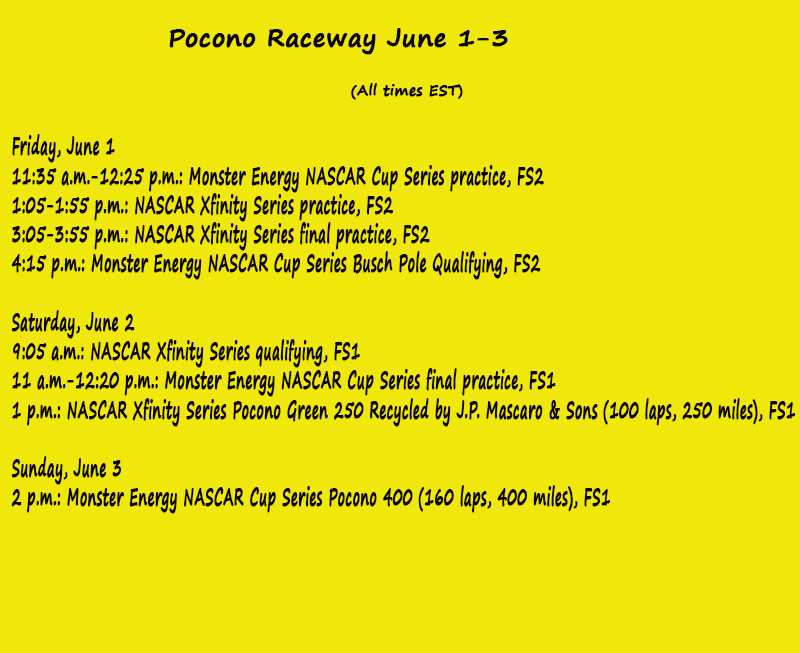