Ten drivers since 2001 have scored multiple wins at Michigan led by Greg Biffle, who had four (back-to-back in 2004 and 2005 and back-to-back 2012 and 2013). Matt Kenseth and Kurt Busch join Larson as three-time winners since then. Ryan Newman, Carl Edwards, Dale Earnhardt Jr., Denny Hamlin, Joey Logano and Jeff Gordon all have won twice in that timeframe.

And you can add in NASCAR Hall of Famers Dale Jarrett – who has three total wins at Michigan – and Mark Martin – who has four total wins – each picked up their final win during that time as well. Jarrett won in 2002 and Martin last won in 2009.

Among those with at least one win now are reigning Monster Energy NASCAR Cup championship leaders Kyle Busch (2011) and Kevin Harvick (2010), plus Jimmie Johnson (2014) and Bowyer.

Interestingly, five of the top-10 drivers in driver rating at Michigan have never won at the track before, including last week’s first-time Cup victor Chase Elliott, whose driver rating of 108.9 is tops among all active drivers here. He’s never finished out of the top-10 in five Michigan starts, including three consecutive runner-up finishes in his first three races.

Sunoco Rookie of the Year standings leader William Byron, who carries the seventh-best driver rating here, never ran a lap outside the top-15 in his debut in June. Erik Jones’ average finish is 10.3 in three races at Michigan. And Jones’ fellow Michigan native Brad Keselowski has finished second or third four times – both Jones and Keselowski looking for their first home-state trophy hoist.

The NASCAR Xfinity Series has historically had a remarkable streak of first-time winners during its summer run of road course events. This weekend’s Rock n Roll Tequila 170 at Mid-Ohio Sports Car Course (Saturday, Aug. 11 at 3 p.m. ET on NBCSN, MRN and SiriusXM NASCAR Radio) features 28 drivers aiming for that first series win. IMSA regular Justin Marks is the only former Mid-Ohio winner in the field – scoring his very first series win there in 2016.

Marks along with sports car stars Andy Lally and Katherine Legge – who will be making her NASCAR debut – are entered this weekend as well as former Xfinity Series favorite Brendan Gaughan.

Daniel Hemric, who is ranked third behind second-place Cole Custer and points leader Christopher Bell in the Xfinity championship, finished second to Sam Hornish Jr. at Mid-Ohio last year. Hemric is still looking for his first win of the season. Bell, a renowned dirt racer, posted his first series top-10 on a road course last weekend at Watkins Glen International.

With only two more races remaining before the NASCAR Camping World Truck Series Playoffs start, a large group of talented rookies are still hoping to break through and earn a position courtesy of the super-fast Michigan International Speedway two-miler this weekend. As the Playoff standings look currently, no rookie is among the contending eight.

Rookie Myatt Snider, 23, is in ninth place in the standings but 85-points behind the eighth place cutoff position. His best showing at a big track was third at Talladega Superspeedway. Dalton Sargeant, 20, is ranked 11th but coming off his best career finish – a third-place at Pocono two weeks ago. And Todd Gilliland, 18, is ranked 12th – his best big track result also at the 2.5-mile Pocono Raceway  – a seventh-place. All three drivers will be making their Michigan International Speedway debut on Saturday, August 11 (at 1 p.m. ET on FS1, MRN and SiriusXM NASCAR Radio).

What to Watch For: Kyle Larson is the defending race winner … Roush-Fenway Racing is the winningest team at MIS with 13 victories. …Kasey Kahne, Kurt Busch and Joey Logano lead all active drivers with three pole positions each. … Kyle Larson, Kurt Busch and Matt Kenseth lead all active drivers with three wins each. … Bill Elliott holds the record for most consecutive wins (four) at Michigan. Ryan Newman (2003-04) and Larson (2016-17) are the only two active drivers to win consecutive races. … Chase Elliott leads all driver with an average finish of 4.6 in five starts. … The pole position is the winningest starting spot on the grid – producing 21 winners. … David Pearson’s nine wins is the most in series history at Michigan. … Kevin Harvick’s seven runner-up finishes is the most among active drivers. Retired driver Jeff Gordon tops the list with eight. … The “Big 3” – Kyle Busch, Harvick and Truex – have combined for only two wins at Michigan. Busch’s came back in 2011, Harvick’s was in 2006 and Truex is still looking for his first win.

What to Watch For: The championship standings are heating up with only five races remaining before the NASCAR Xfinity Series Playoffs. Four-time winner and series rookie Christopher Bell holds a 22-point edge on second place Cole Custer. And Custer is only a single point up on Daniel Hemric and four points up on veteran Elliott Sadler. Of the four, only Bell has a win this season. … There have been nine different winners in the last 10 road course races. … There are 28 drivers entered this week who have never won an Xfinity Series race before. … Defending race winner Sam Hornish Jr. is not entered this weekend. … IMSA driver and former Indy 500 competitor Katherine Legge is making her NASCAR debut this weekend. She will also compete in the Xfinity race at Elkhart Lake, Wisc. in two weeks. … Of those entered this weekend, former Cup Rookie of the Year and current IMSA driver Andy Lally (6.0) along with former Xfinity Series regular Brendan Gaughan (6.5) sport the best average road course finishes over the past three seasons.

What to Watch For: Four-time season winner and two-time series champ Johnny Sauter carries the points lead with two races left to set the Playoff field. … Three of the current top eight drivers are still looking for their first win of the season – Grant Enfinger, Stewart Friesen and former two-time series champion Matt Crafton. … The rookie class has certainly earned headlines this season but they are still looking to earn a Playoff spot. Myatt Snider, 23, is ranked ninth in the standings, 85-points behind eighth place Ben Rhodes making a victory a must to break into championship contention. … Popular driver Noah Gragson returns to competition this weekend after missing the last race at Pocono with an illness. Gragson leads the series with seven stage wins. He’s ranked second to Sauter in the standings. … Monster Energy NASCAR Cup rookie Bubba Wallace is the defending winner of this week’s race. Crafton’s sixth-place finish was the highest for a full-time truck series driver entered this weekend. … There are only two multi-race Michigan winners – Greg Biffle (1999, 2000) and Travis Kvapil (2004, 07). Sauter and Brett Moffitt are the only former winners entered this week. 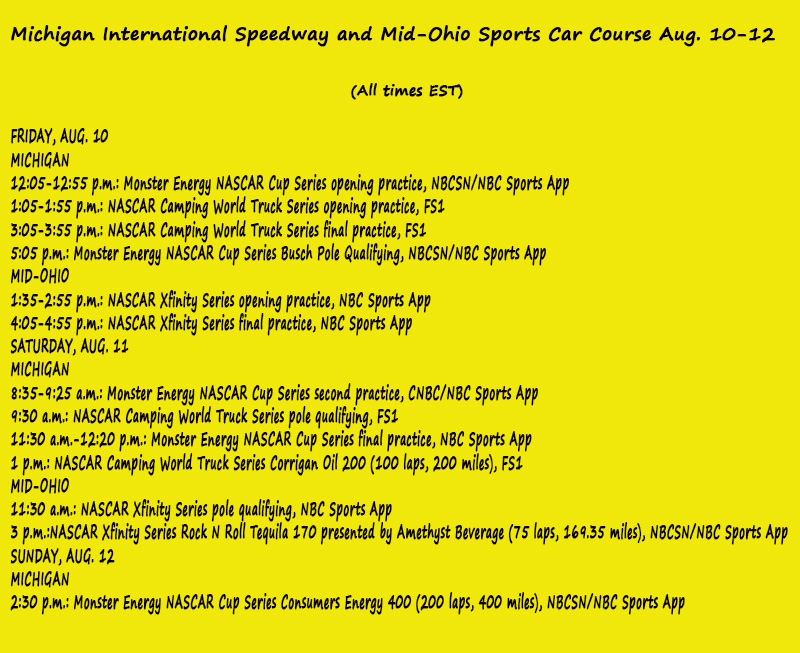