As the Monster Energy NASCAR Cup Series returns to a summertime date at Chicagoland Speedway, we also see the return of the NBC Sports Group to the broadcast schedule – and a new beginning for Dale Earnhardt Jr.

After retiring from full-time racing following the 2017 season, the 15-time Most Popular Driver and two-time Daytona 500 champion officially takes his spot in the NBC Sports broadcast team for the Overton’s 400 on Sunday, July 1 (2:30 p.m. ET on NBCSN, MRN and SiriusXM NASCAR Radio).

He spent the off-season getting familiar with his new role in front of the camera – with a headset instead of a helmet – by taking part in several non-NASCAR events with NBC. Earnhardt did segments at the Super Bowl, Olympics and Stanley Cup – and, most recently, sat beside Jimmy Fallon on Wednesday night’s episode of The Tonight Show.

And Earnhardt is certainly qualified to talk about what it takes to win in July at Chicagoland Speedway – he won the 2005 race there.

HIGHER STAKES FOR ALL

For the past seven years, Chicagoland Speedway hosted the opening race in the Monster Energy Series Playoffs – meaning 16 drivers were looking for a while to advance to the next round in the postseason.

This year, the stakes have changed as the race moves to an early-summer date and a berth in the Playoffs is now on the line as only six drivers are virtually locked in.

There are a couple key veteran drivers in Brad Keselowski and Jimmie Johnson who are still in search of that all-important first win of the season. Chicagoland is one of three tracks (also Kentucky and Watkins Glen) where Johnson has yet to win a Monster Energy Series race, but his lone NASCAR Xfinity Series win came at the track in Joliet. Keselowski, on the other hand, has twice visited Victory Lane there – and followed up his 2012 win with the championship.

And don’t count out Chase Elliott. The 22-year-old Hendrick Motorsports teammate of Johnson is still pursuing his first career Monster Energy Series win – but his two starts at Chicagoland have been stellar. He finished third in his first outing to the track and followed that up with a second-place finish last year. Also of note with Elliott – every lap he’s run at Chicagoland has been in the top-15 on the track.

The NASCAR Xfinity Series has seen 12 different winners in the first 14 races this season; which is the most through the first 14 races since 1996 (also saw 12 winners). Even though the defending Chicagoland Speedway winner, Justin Allgaier, became the second driver with multiple wins this season with his victory at Iowa, the chances are once again pretty good for the fans to see a different winner this weekend at Chicagoland Speedway.

The Illinois native, Allgaier, will be going for two-in-a-row at Chicago this weekend, a feat not yet accomplished in the 22 Xfinity Series races held at the famed 1.5-mile speedway. In total 14 different drivers have won at Chicago.

GMS Racing’s Johnny Sauter has never finished a season with more than four wins before, but this season he hopes to put an end to that.

Sauter, has won four out of the first ten races this season, in dominating fashion. This weekend at Chicagoland Speedway he will look to add to his win total as he returns as the defending winner of this event from last season. In nine starts at Chicago, Sauter has posted one win (2017), five top fives, seven top 10s and an average finish of 8.0.

Sauter isn’t the only driver hungry for a win heading to Chicago this weekend. Justin Haley added his name to this season’s winners list last weekend at Gateway. If he could pull off a win this weekend he would become just the third driver with multiple wins this season joining the series standings leader Johnny Sauter (four wins) and Brett Moffit (two wins).

What to Watch For: Martin Truex Jr. has won the last two races at Chicagoland, last year concluding the season with the Monster Energy Series championship. … Before Truex Jr., the last driver to win back-to-back races at Chicagoland was Kevin Harvick in the first two years the series raced there (2001, 2002). … Tony Stewart (2004, 2007, 2011) and Brad Keselowski (2012 and 2014) are the only other drivers with multiple wins in Chicago. … Jimmie Johnson may not have won, yet, at Chicagoland, but he leads loop data categories in laps led (637), fastest laps run (412) and quality passes (421). … There are some impressive win milestones at stake at Chicago. Jimmie Johnson is one victory away from tying Hall of Famers Bobby Allison and Darrell Waltrip with 84 wins. Kyle Busch is one win away from earning his 48th victory, which would tie him with Herb Thomas, 14th on the all-time list. Denny Hamlin is one victory away from tying NASCAR Hall of Famer Dale Jarrett with 32 wins, which is the 24th best win total all-time. … Only one of 17 races at Chicagoland has been won from the Busch Pole and that was Kyle Busch in 2008. Of further note, it was the only win at the track from the front row. … Kyle Busch’s win in 2008 was also by the closest Margin of Victory at the track – 0.159 over Jimmie Johnson. …Jimmie Johnson leads the field in Busch Poles won with two (2005, 2012). …Kevin Harvick is the only driver who won in his first visit to Chicagoland (2001). … Ryan Newman won in his second start at the track (2003). … Kurt Busch has the most starts at Chicagoland (17) without a Monster Energy Series win.

What to Watch For: JR Motorsport’s Justin Allgaier returns to Chicagoland Speedway to not only defend his win from last season and become the first driver to go back-to-back at Chicago in the NASCAR Xfinity Series, but if he accomplishes the feat, and wins this weekend he would also become the first driver this season to win consecutive races. Allgaier hails from Illinois and considers Chicagoland Speedway his home track. … After 13 straight races with top-10 finishes going back to Miami, JR Motorsports Elliott Sadler’s luck has run out and in his last two starts has finished worse than 25th. This not only ended his streak of top 10s, but also greatly diminished a standings lead that he had built to more than 60-points over second-place. Now the veteran from Virginia is looking to stop the recent skid this weekend at Chicago. Sadler still holds the points lead, but by a slim margin over second-place Cole Custer (-4 points) and third-place Christopher Bell (-7). … The NASCAR Xfinity Series has held 37 races in the state of Illinois among two tracks (Chicagoland Speedway – 22 races and Gateway Motorsports Park – 15 races). The first NASCAR Xfinity Series race held in the state of Illinois was on July 26, 1997, at Gateway Motorsports Park in Madison, Illinois, and the event was won by Elliott Sadler, then driving for Gary Bechtel in the No. 29 Chevrolet. The first race held at Chicagoland Speedway in Juliet, Illinois, was on July 14, 2001, and it was won by seven-time Monster Energy NASCAR Cup Series champion Jimmie Johnson, then driving for Stanley Herzog in the No. 92 Chevrolet. The victory is Johnson’s lone Xfinity Series career win to this day.

What to Watch For:  Johnny Sauter is the defending race winner at Chicagoland Speedway and one of two series Chicago winners entered this week (the other John H. Nemechek, 2015). Sauter, the points leader is looking for his second win in-a-row at Chicagoland. Noah Gragson is sitting 73-points behind Sauter in the standings followed by Brett Moffitt in third 96-points back. … Of the three immediately preceding winners, Nemechek was the youngest – winning at the age of 18, three years ago. … Chicagoland Speedway has only produced five different winners in the NASCAR Camping World Truck Series, led by Kyle Busch with five wins. … There are eight drivers making their track debut this weekend including Austin Hill, Todd Gilliland, Robby Lyons, Brett Moffitt, Dalton Sargeant, Stewart Friesen, Bo LeMastus and Bayley Currey. … Michael Affarano is entered this weekend for the first time since June of 2015. … Veteran Matt Crafton is still looking for his first win of the season. He has three top fives and five top 10s with one pole at this track but doesn’t have a win yet. … Only two times has a winner started out of the top 10, in 2012 and 2015 – and both times they started in the 11th position. 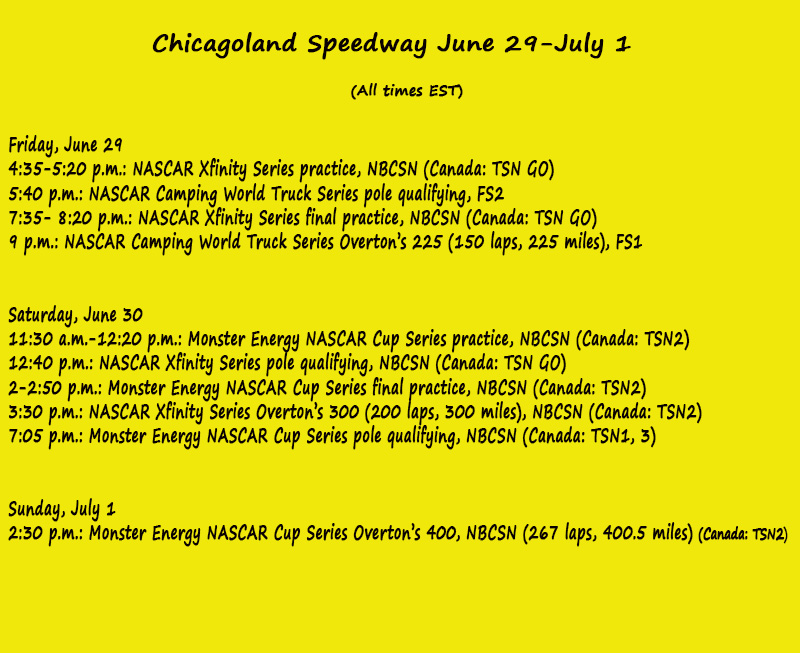