As Chase Elliott visited with students at Embry-Riddle Aeronautical University Wednesday, he had a perfect view of Daytona International Speedway next door to the school campus. Having earned his private pilot license as a teenager in high school, the school is a place Elliott appreciates. And as a rising star in the Monster Energy NASCAR Cup Series, the speedway is a venue representing historic potential.

For Elliott, who has won two Daytona 500 Busch Pole positions and nearly won the sport’s greatest race, the setting was a gentle reminder of what may also await the popular 22-year-old later this week as the series races at Michigan International Speedway – another venue where Elliott has proven to be an almost instant Cup success story.

The Hendrick Motorsports driver finished runner-up in the first three of his four visits to the two-mile Michigan track. His worst showing? Eighth place, in last year’s August stop. Still a top-10 finish and, in all, the effort good enough to make Elliott a top-rated driver as the series returns this weekend for the FireKeepers Casino 400 (2 p.m. ET, FOX, MRN, SiriusXM NASCAR Radio).

“I look forward to going to Michigan,’’ Elliott said from Daytona Beach on Wednesday, where he was promoting the upcoming Coke Zero Sugar 400 summer race before travelling north to Michigan.

“I don’t really know why Michigan has been good to us. We didn’t have as good a run there last fall as we had in other races, but it’s been a good pace for the most part and I certainly look forward to going there.”

If history continues to be an indicator of what to expect in this weekend’s FireKeeper’s Casino 400 at Michigan International Speedway, then NASCAR’s best young drivers have plenty to look forward to.

Ironically, those with the least history have historically fared well at Michigan in the last few races.

Fifth-year Monster Energy Series driver Kyle Larson 25, is not only the defending race winner, but the Chip Ganassi Racing Chevrolet driver boasts a three-race winning streak at the track. Michigan-native Erik Jones, 22, has finishes of third and 13th in his two starts. As with Elliott, they are among the top-ranked drivers in competition. Albeit with fewer starts than much of the field, but Larson’s driver rating (101.1) is third-ranked and Jones is fourth-ranked (98.4) heading into Sunday’s race.

While his past showing is certainly encouraging, Elliott is quick to caution about the fast start for himself and his fellow young drivers. He is just hopeful his long-term body of work echoes his early performance.

“One thing I know for sure, those driver ratings are based on four races for me compared to probably 24 races for a lot of other guys,’’ Elliott said. “They’re skewed because we’ve run pretty well every time we’ve gone, but that’s not always going to be the case. In 10 years if I still have a job, we’ll see how the numbers are then. That will be the real test.”

Elliott did allow that he felt more optimistic this week. Chevrolet is looking for its first win since the season-opening Daytona 500 and Elliott echoed a lot of Chevy drivers’ feelings that the next win feels imminent.

Three drivers – Ford’s Kevin Harvick and Toyota’s Kyle Busch and Martin Truex Jr. have won 11 of the first 14 races. But at Michigan International Speedway, Chevrolet has dominated as of late with Larson’s three wins and Elliott’s three runner-ups in the past four races serving notice.

“I think we’ve improved,’’ Elliott said emphatically. “I can’t say we’re perfect. I can’t say we’re the best each week, but we’ve gotten better and I feel like I’ve seen more improvement over the past two weeks than I’ve seen in all year. So that’s encouraging.

“I thought we had our best race of the season and probably best race we’ve had in a while – since last fall – this past week at Pocono. The results really didn’t show it, but we had some strength in our car this weekend I haven’t had all season, so I was proud of that. I hope that carries to Michigan.”

Joe Gibbs Racing is looking to become the first team to win four consecutive NASCAR Xfinity Series races at Michigan. Kyle Busch, Daniel Suarez and Denny Hamlin have hoisted the last three trophies, but Busch is the only one of the three entered this weekend. Christopher Bell and Brandon Jones are hoping to join that elite JGR club. And should the team win, it would become the all-time winningest Xfinity team at Michigan – breaking a tie with Roush Fenway Racing (five wins).

The odds certainly seem to favor the opportunity. Busch is a two-time race winner and has an amazing track record at Michigan with nine top fives and an average finish of 4.0 in 10 starts. His lone finish outside the top five was 14th in 2006. In six of those 10 races at Michigan, he has finished third or better.

This will be Bell’s Xfinity Series debut at Michigan but he has a runner-up finish in the NASCAR Camping World Truck Series at the track. Jones has two top-10 finishes in two Xfinity starts here.

Veteran driver Johnny Sauter not only leads the NASCAR Camping World Truck Series championship standings, he shows up at Texas Motor Speedway for this weekend’s PPG 400 a four-time winner on the 1.5-mile high banks. He has three victories already this season and is poised to tie a career-best mark of four wins (2017) only eight races into the 2018 season.

Taking a Texas trophy, in particular, has historically been a good sign for the winner. The past four series champions visited Texas’ famous Victory Lane in their championship season. Sauter has won two of the last three Texas races and is the defending winner.

What to Watch For: Roush Fenway Racing has the most wins at Michigan with 13. NASCAR Hall of Famer Mark Martin and Greg Biffle have four each, Carl Edwards scored two for the team as did Matt Kenseth. Kurt Busch had one victory driving for RFR. … Among drivers with more than 10 starts, Matt Kenseth holds the best driver rating (101.9) at MIS. …In the “Motor City” especially, manufacturer wins are tracked closely. Ford leads all with 35 Michigan victories. Chevrolet is next with 26 – including the last three consecutively. … A hefty 59 percent of the race winners have started from a top-five position on the grid. The front row has produced the most winners (30 percent) and the first startingposition is the single most productive starting spot with 21 winners – more than any other position. …Roush driver Matt Kenseth has been a part of two of the top-five closest finishes. He beat Dale Jarrett by .131 seconds in 2011 and he lost to Denny Hamlin by .281 seconds in 2002. … Jimmie Johnson may only have one victory here, but his 687 laps led is most among active drivers – significantly more than second place on the list – Kurt Busch and his 448 laps out front. … Three-time defending race winner Kyle Larson and NASCAR Hall of Famer Dale Jarrett are the only two drivers to score their first Cup win at Michigan. …Kevin Harvick’s six runner-up finishes at Michigan is most among active drivers. … Ryan Newman (2003-04) and Larson are the only active drivers to win consecutive races at MIS. …Joey Logano was the most recent driver to win consecutive pole positions (2016 sweep). …Logano is the youngest winner at Michigan (August, 2013 at 23 years, 2 months, 25 days).  Erik Jones, 22, Chase Elliott, 22, and William Byron, 20, could eclipse that age mark of distinction this weekend.

What to Watch For: Veteran Elliott Sadler remains firmly atop the championship standings – a hefty 62 points up on the field. However, for the first time this season, the JR Motorsports driver’s closest challenger is Cole Custer, who moved into second place in the standings following the Pocono, Pa. race last Saturday. He has a single-point advantage over Daniel Hemric. All three – Elliott, Custer and Hemric – are still looking for their first win of the season. … Both Custer and Hemric will be making their second start at MIS. They finished 10th and 12th, respectively, last year. …. There have been eight different winners in the last eight races at Michigan. Busch and Paul Menard are the only past winners entered this weekend. …. Austin Cindric is coming off his career-best finish in the series – fourth place at Pocono, Pa. It’s his second career top-five. …Denny Hamlin’s dramatic last lap winning pass of William Byron last year and the resulting 0.012-second Margin of Victory marks the closest race in Michigan Xfinity Series history. The last six races – dating back to 2012 – have featured a MOV of less than a second.  …. In addition to Kyle Busch, Monster Energy Series regulars Kevin Harvick (No. 98 Biagi-DenBeste Racing Ford) and Alex Bowman (No. 23 GMS Chevrolet) are entered for Saturday’s race.

What to Watch For: Johnny Sauter is looking to become only the third driver in history to win four of the first eight races of the season. Kyle Busch and Mike Skinner also accomplished the feat. … Sauter holds a 59-point lead over Noah Gragson in the championship standings. Brett Moffitt is six points behind Gragson. … Moffitt has a win and four top-five finishes in seven starts this season. … In only nine series starts, 18-year-old Todd Gilliland has five top-10s – two of those have come in his three starts this season. …Two-time series champion Matt Crafton is looking for his first win since the Eldora (Ohio) Speedway dirt track event last season. He has two previous wins at Texas and 23 top-10 finishes in 34 races there. 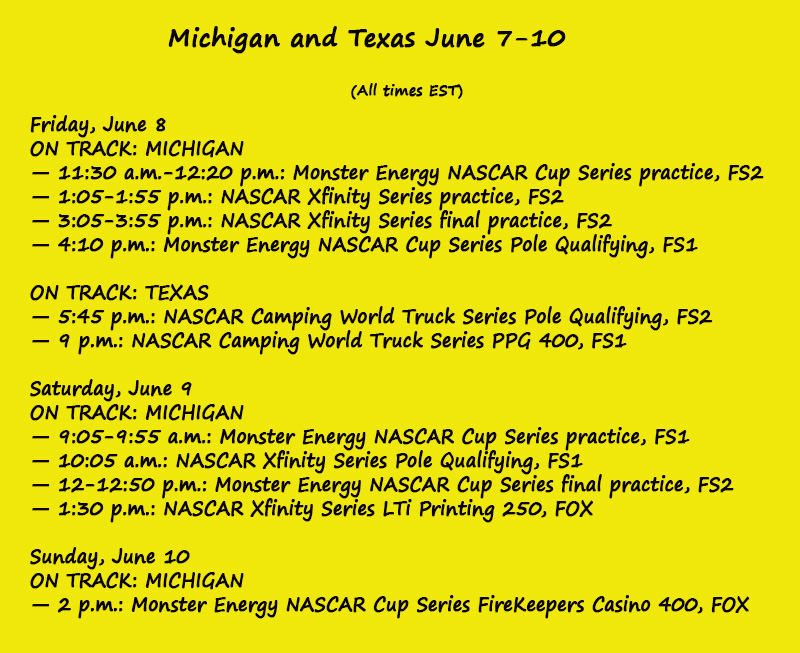