But the veteran is wisely preparing himself for the bigger picture – there’s a championship trophy to hoist following the Nov. 16 season-finale at Homestead-Miami Speedway. And the competition for that podium is as intense as it’s ever been.

Brett Moffitt collected his fourth victory of the season last weekend in Michigan to tie Sauter’s regular season trophy haul. He will be second when the Playoff points are reset for the opening round of the postseason, Aug. 26 on the Canadian Tire Motorsports Park road course.

Sauter will earn a 15-point bonus for winning the regular season and points will be distributed in a waning order throughout the top of the standings.

“We’ve had a great season to this point, and we’re really proud of what we’ve accomplished,” the 26-year old Moffitt said. “I’ve said all year we don’t have the most people or the most equipment, but [crew chief] Scott [Zipadelli] and our entire team has made the most of what we do have. To have four wins is great, but there’s a bigger prize out there and that’s where our focus is.”

Sauter, 40, and Moffitt certainly are motivated to win the regular season finale and make a strong statement as the Playoffs begin.

Sauter won three of his races in a four-week span early in the season and has five top-10s in the seven races since his last win at Texas in April. He was runner-up to Moffitt last weekend in Michigan in the No. 21 GMS Racing Chevrolet. He’s winless in 10 Bristol truck starts with a best showing of runner-up in 2011. He has finished top-10 in the last five races there, however.

Moffitt has won two of the last five races in the No. 16 Hattori Motorsports Toyota. He’s only competed in one truck series race at Bristol and finished runner-up in 2016.

What to Watch For: This is the regular season finale and will set the eight driver series Playoff field. … There are currently six winners that have automatically earned Playoff positions. … Veteran and two-time series champion Matt Crafton is still looking for his first victory of the season. He has not had a winless season since 2012. … Two of the series most promising young talents, rookies Myatt Snider and Todd Gilliland may be considered wildcards for this weekend’s Bristol race. Neither would qualify for the Playoffs based on their current points positions, but both are candidates to win this weekend and both are making their series debut at the track. Gilliland is coming off a season best fifth-place at Michigan. And Snider’s last top-10 came at Chicago, five races ago. … Harrison Burton is entered this weekend – his first series race since Iowa, where he won the pole position and finished third. He has three top-10 finishes in as many races this year. … Stefan Parsons, son of FOX commentator Phil Parsons, will make his series debut this week driving the No. 15 Chevrolet for Premium Motorsports. … Chevrolet leads the manufacturer standings by three-points over Toyota. 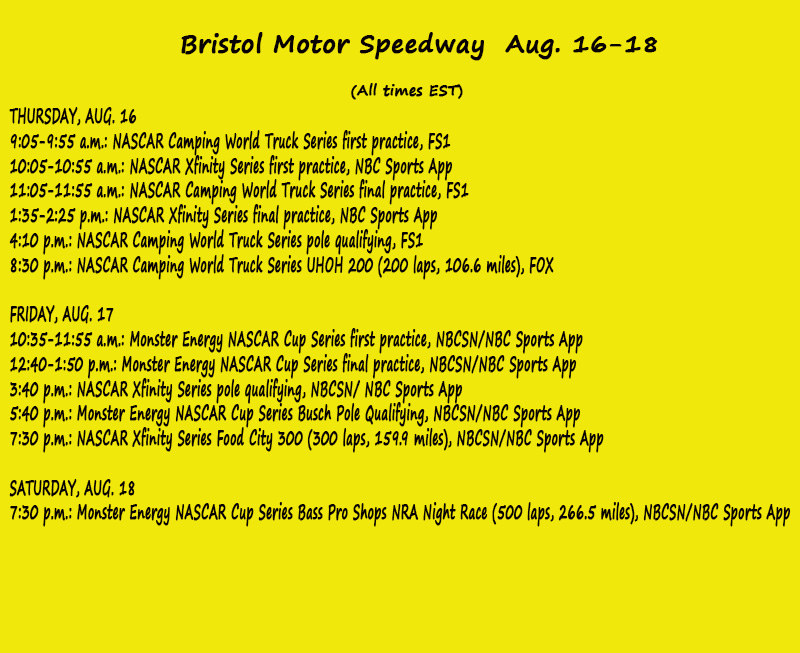