The first round of pit stops has been completed at the Daytona 500. A new challenge with the Next Gen car, an all new design including bigger brakes and a reworked chassis meant pit stops were a new challenge. Denny Hamlin proved that during his Duel qualifying race, spinning on entry.

Formula One World Champion Jacques Villeneuve demonstrated that once again with a spin on entry, although he locked the car down and recovered. His 27 Team Hezeberg car was pitting from a lap down after losing the draft earlier in the day. Ty Dillon in the 42 Petty GMS Chevrolet also had trouble on pit road with speeding.

The first caution came out just after the pit cycle was completed as Chase Briscoe in the 14 checked up on the speedway and was spun by Austin Cindric behind him. At the same time, Kaz Grala lost a wheel on track. With the single lug nut on the Next Gen car not being tightened, The Money Team’s 50 car will lose its crew chief and two crew members for four races. 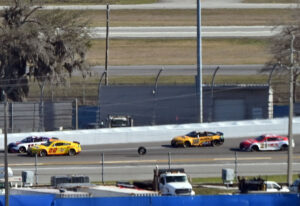 The Penske 22 of Joey Logano gained about twenty places through that pit cycle after being sent to the rear in a backup car after a crash in his Duel race. Following a few laps of green flag racing on the restart, the 31 Kaulig car of Justin Haley also lost a wheel to draw out the second caution in a few laps.