If it seems as if Brad Keselowski took to Talladega Superspeedway from his very first Monster Energy NASCAR Cup Series laps at the notoriously tough and unpredictable venue – it’s because he did. The Team Penske driver’s five wins there is a total twice that of any of his competitors in this Sunday’s 1000Bulbs.com 500 Playoff race (at 2 p.m. ET on NBC, MRN, SiriusXM NASCAR Radio).

In fact, it’s been a Team Penske domination as of late. Keselowski and teammate Joey Logano are easily the winningest drivers at the 2.66-mile superspeedway in recent time. Each have a pair of Playoff wins at the track and Logano won there in the spring.

Their Ford power plant has also turned in an impressive track record with six consecutive wins (three for Logano, two for Keselowski and one for Roush Fenway Racing’s Ricky Stenhouse Jr. In fact, Ford has won seven of the last eight going back to Keselowski’s win in the 2014 Fall race.

Even after a late race accident while running at the front of the field derailed his victory hopes last week at Dover, Keselowski was immediately and fondly looking ahead.

“I feel really good about next week in Talladega,” he said. “We’ll see what we can do there and see how it goes.”

Keselowski, who won the Las Vegas Playoff opener, finished 14th last week at Dover in the opening race of the second round of the Playoffs. The driver of the No. 2 Team Penske Ford is ranked seventh in the Playoff standings with a 21-point edge on the cutoff. He crashed out in the spring Talladega race, but has two wins in the last five visits to the track.

Logano, the driver of the No. 22 Team Penske Ford, won at Talladega in the spring. He has top-10 finishes in all four Playoff races to date, including a third-place at Dover last week. He is ranked fifth in the Playoff standings with a 31-point advantage over the ninth place cutoff position.

Ryan Blaney, driver of the No. 12 Team Penske Ford, has a Playoff win at the Charlotte Road Course two weeks ago. He finished 11th in the second round opener at Dover last week and is ranked eighth with a 10-point edge on ninth place Aric Almirola and 10th place Clint Bowyer. He finished 18th at Talladega in the spring and a career best fourth-place in 2015.

Camping World Trucks Are Back At It

After a four-week break in the schedule, the NASCAR Camping World Truck Series returns to competition at the always-exiting Talladega Superspeedway in Saturday’s Fr8Auctions 250 (at 1 p.m. ET on FOX, MRN and SiriusXM NASCAR Radio).

This is the elimination race for the opening Round of 8 in the series Playoffs with only Justin Haley and Grant Enfinger assured of advancing because of wins at the Playoff openers at Canadian Tire Motorsports Park (Haley) and Las Vegas (Enfinger). Only 10 points separate 10th place Stewart Friesen from eighth place Matt Crafton, a two-time series champion, however.

Ninth place Ben Rhodes, who trails Crafton by five points, has yet to finish the race in two Talladega starts. Friesen finished 17th last year in his only previous start. Parker Kligerman is the defending race winner.

What to Watch For: Brad Keselowski’s five Talladega wins is most in the field and double that of any other driver. Kurt Busch’s 19 top-10s is most in the field. … Last week’s Dover winner Chase Elliott leads the competition with a 93.7 driver rating and a 4.0 average starting position at Talladega. … Chevrolet leads manufacturers with 40 wins at the track, Ford is next with 27, including the last six straight. … Talladega is such an unpredictable venue that five times a non-Playoff driver has won the race. The last time that happened was 2013 when Jamie McMurray won. … McMurray and 2018 Playoff drivers Clint Bowyer, Brad Keselowski and Joey Logano all have won two Playoff races at Talladega. … Martin Truex Jr.’s 13 DNFs at Talladega is double that of any other Playoff driver. … Jimmie Johnson won the 2006 title after finishing 24th – the lowest finish by a driver who went on to hoist a championship. Last year’s Cup champ Truex finished 23rd in the Talladega Playoff race. ….The outside pole position is the most prolific starting position, producing 20 race winners. … The farthest back a race winner has started is 36th (Jeff Gordon in 2000). …Ricky Stenhouse Jr. (2017) and Keselowski (2009) earned their first career Cup wins at Talladega. … Stenhouse leads all drivers in the field with a 11.0 average finishing position. …Jimmie Johnson leads active drivers with 470 laps led in 32 starts. The late NASCAR Hall of Famer Dale Earnhardt holds the track record with 1,377 laps led in 44 starts.

What to Watch For: Parker Kligerman is the defending race winner. … Six of the eight Playoff drivers will advance to the next round of the Playoffs following Saturday’s race. … Johnny Sauter (2013) and Grant Enfinger (2016) are the only two Playoff drivers with victories at Talladega.  … There have been 12 different pole winners in 12 truck races. Christopher Bell, now an Xfinity Series championship contender, won the pole position here last year. … Defending series champion Johnny Sauter led the most laps (39) in the race last year, but finished 12th. …  Playoff driver Brett Moffitt will be making his Talladega race debut this week. Interestingly, he won the race at his two previous track debuts in 2018 – at Iowa and Chicagoland. …There are 13 drivers hoping to make their Talladega truck series debut this weekend, including Spencer Gallagher who won the Xfinity Series race here earlier this season. …Toyota leads all manufacturers with nine Talladega race victories, including five of the last six. …Sauter and Timothy Peters have the most top-fives (four) and most top-10s (five) of the drivers entered this week. …There will be two father-son driver combos entered this week: Todd and David Gilliland along with Joe and John Hunter Nemechek. …Three drivers have won this race in back-to-back years – Todd Bodine (2007-08), Kyle Busch (2009-10) and Timothy Peters (2014-15). 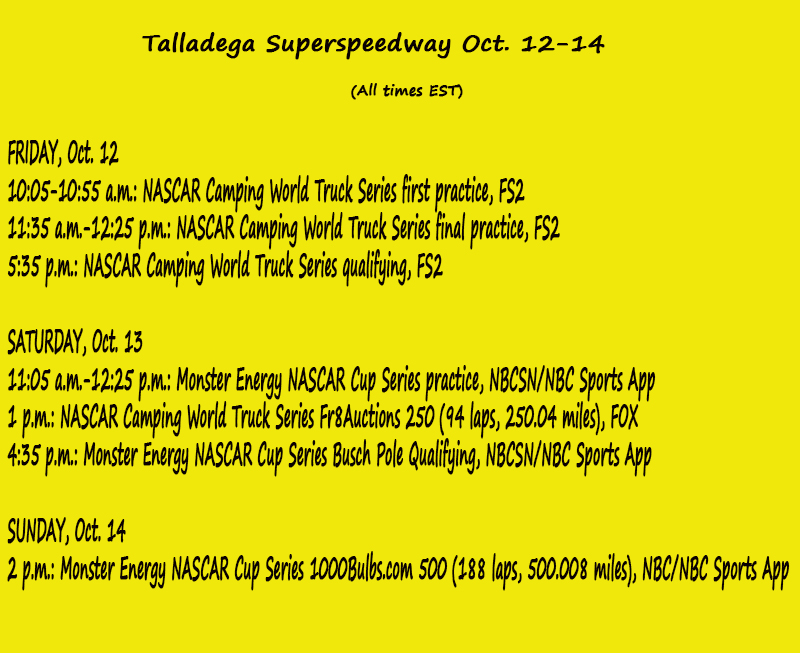