Although Pocono Raceway has long been regarded as one of the most challenging stops on the Monster Energy NASCAR Cup Series schedule, young drivers have shown a propensity in mastering the challenge.

Particularly in the last few seasons, the 2.5-mile, triangular-shaped Pocono Raceway has proven to provide a high-speed introduction of first-time winners. From Denny Hamlin, who won his first two starts on “The Tricky Triangle” in 2006 to Chris Buescher’s win a decade later to Ryan Blaney’s emotion-filled first trophy hoist in 2017, this venue has served as a Welcome-to-the-Winner’s-Party for many of the sport’s best.

This Sunday’s Pocono 400 (2 p.m. ET on FS1, MRN and SiriusXM NASCAR Radio) presents prime opportunity for Hendrick Motorsport’s Alex Bowman and Stewart-Haas Racing’s Daniel Suarez to take their first ever trip to Victory Lane. Suarez won his first career series pole position in the last visit to Pocono in July, 2018 and finished a career best runner-up in the race. Bowman – who is fresh off three consecutive runner-up finishes at Talladega, Dover and Kansas – had his best ever Pocono finish in 2018 as well – a third place effort.

Bowman’s Hendrick Motorsports teammate William Byron scored a sixth-place finish at the most recent Pocono race in his 2018 Cup rookie season – the first top-10 of his Monster Energy Series career. In 2016 he won the NASCAR Gander Outdoors Truck Series race from the pole position at Pocono.

As promising as it is for newcomers, this race stop also presents prime opportunity for several veterans looking to earn another type of first win – a first win of the season – to solidify their championship chances. Stewart-Haas Racing drivers such as Kevin Harvick, Clint Bowyer and Aric Almirola have been on the cusp of a first 2019 trophy – but the team, which won 12 races a year ago among four drivers, has been shut out of the winner’s circle so far.

Harvick, who had eight wins in 2018, had five of them before he arrived at Pocono Raceway last June. He has yet to win at Pocono in his championship career, but has eight top-10 finishes in the last nine races there, including four runner-up finishes in that timeframe. He was fourth in both races last year.

Bowyer has 10 top-10 finishes in 26 Pocono starts, but led only five laps in one race in the last 17 races there. Pocono was however, a good starting point for a solid summer run in 2018 as he earned his second victory of the season the very next week at Michigan.

Almirola scored the only top-10 (seventh) of his career at Pocono in this race last year.

Both Chip Ganassi Racing drivers Kyle Larson and Kurt Busch have impressive past records at Pocono and would also like to land a first points-paying trophy of the season. Larson set the track qualifying record (183.438 mph) as a rookie in 2014 and has five top-10s in 10 starts at Pocono – plus a win in the inaugural Xfinity Series race there in 2017. Busch has more top-10 finishes (20) than any driver in the field and only Hamlin (four) has more wins than the three-time Pocono winner Busch.

Both bring promising recent work to the race weekend. Larson has earned two of his season’s four top-10s in the last three races. Busch has eight top-10s on the season.

The biggest threat to these Pocono-hopefuls, however, will likely be the defending race winner, Joe Gibbs Racing’s Martin Truex Jr., who just earned his third victory of 2019 last weekend at Charlotte. Truex has won at Pocono twice – in 2015 and 2018 – and led laps in six of the last eight races.

This season he is one of three drivers with three wins each – meaning he and fellow three-race winners Kyle Busch and Brad Keselowski have accounted for 69 percent of the victories in this young 13-race season.

XFINITY GETS READY FOR POCONO

With only three Xfinity races in its short but solid history at Pocono Raceway, there is a great sense of “anyone’s game” at the always-challenging track. That’s especially true in Saturday’s Pocono Green 250 Recycled by J.P. Mascaro and Sons (1 p.m. ET on FS1, MRN and SiriusXM NASCAR Radio) with no former winners in the field.

Championship points leader Tyler Reddick arrives in Pocono in the midst of a solid case for another title. The defending series champ has top-five finishes in the last eight races with wins at Talladega and last weekend at Charlotte. He holds a 65-point lead over second place Christopher Bell and is up 103 points on third place Cole Custer. The trio responsible for seven wins this year – the only fulltime Xfinity drivers with multiple wins this season.

Reddick was ninth last year in his series Pocono debut, while Bell crashed out in his first series try at the Tricky Triangle. Custer, on the other hand, has two top-10 finishes – seventh in 2017 and fifth last year.

Austin Cindric, fourth in the driver standings, started third and finished fourth in his Pocono debut last year. Among the series regulars, Justin Allgaier boasts the best finish in this week’s field, finishing runner-up to Brad Keselowski in 2017 by 0.615-seconds, the closest margin of victory in the event’s brief history.

What to Watch For: Martin Truex Jr.’s victory in this race in 2018 made him one of only five drivers in the field with multiple wins. That was his second. Denny Hamlin leads all active drivers in wins (4). Jimmie Johnson and Kurt Busch have three and Kyle Busch and Truex have two. … Four drivers scored their first career win at Pocono and three are still active (Hamlin in 2006, Chris Buescher in 2016 and Ryan Blaney in 2017). … Hamlin and Carl Edwards (2005) are the only drivers to win in their first Pocono Cup Series start. … NASCAR Hall of Famer Jeff Gordon is the all-time lap leader (1,040 laps). Johnson has led the most laps (740) among active drivers. … Kurt Busch holds the record for most laps led in a single race – 175 of 200 in his 2007 win. …Six drivers have won back-to-back races. Twice a driver has won three consecutive (Bobby Allison 1982-83 and Tim Richmond 1986-87). … The last to win back-to-back races was Dale Earnhardt Jr., who swept the 2014 season. … Hamlin has won back-to-back races twice (2006 sweep and 2009-2010). ….Hamlin boasts the top driver rating (104.0) of any driver in Sunday’s field. …Among the current top-ranked 16 drivers the Busch brothers – Kurt and Kyle – have the most DNFs; five each. …NASCAR legend Richard Petty won the first race at Pocono Raceway in 1974. … Ricky Rudd has made the most Cup Series starts (55). Kevin Harvick has made the most starts (36) among active drivers. …Gordon holds the record for most Pocono wins (six). Fellow NASCAR Hall of Famer Mark Martin holds the record for most runner-up finishes (seven). … Hamlin leads all active drivers with best average starting position (7.115). Kurt Busch is second with a 10.229 average. …Ken Schrader and Bill Elliott hold the record for most pole positions (five). Kyle Busch has won four. …Two drivers in this week’s field won their first pole position at Pocono – Kyle Larson in 2014 and Daniel Suarez in 2018. … The most prolific starting spots are among the top-10 – 70 percent of all Pocono winners started from the first five rows. …The first starting position is the winningest starting position – with 16 victories or 19.5 percent of all races. … Edwards holds the record for winning from the farthest spot on the grid (29th). …Kyle Larson set the track qualifying record (183.438 mph) as a rookie in 2014. … Bubba Wallace made his first Cup start at Pocono in 2017. …Hendrick Motorsports boasts the most race wins (17). …. Chevrolet holds the victory record (32) among manufacturers. Ford is second with 23. Toyota has seven. … The closest margin of victory is Rusty Wallace’s 0.126-second win over Jeff Burton in July, 2000. Ryan Blaney’s first career win in 2017 over Kevin Harvick is the second closest margin of victory (0.139-seconds).

Next Race: Pocono Green 250 Recycled by J.P. Mascaro and Sons

What to Watch For: A first-time winner is assured on Saturday with no previous winners entered. … Among the Xfinity Series regulars, Justin Allgaier boasts the best ever finish in the brief three-race series history at Pocono. He finished runner-up to Brad Keselowski in 2017. … Cole Custer has the best multiple finishes among the field. He is the only Xfinity regular to score two top-10 efforts in the three races. He was seventh in 2017 and fifth in 2018. … There have been no repeat race winners or pole winners in this event. While the winners have been Cup regulars, all three race pole-winners have been Xfinity championship contenders – Erik Jones (2016), Kyle Benjamin (2017) and Cole Custer (2018). …Current Xfinity Series championship leader Tyler Reddick boasts a series best streak of eight consecutive top-five finishes – wins at Talladega, Ala. and last week at Charlotte among them. … Austin Cindric has only one start at Pocono, but his work last year was good enough to earn him the top driver rating (118.9) among title contenders heading into Saturday’s race. He started third and finished fourth in his 2018 debut there last year. … Noah Gragson earned his first “Rookie of the Race” designation of the season last week at Charlotte with a fourth-place finish. … Chase Briscoe holds an 11-point edge over John Hunter Nemechek in the rookie points standings. Gragson is now 20 points behind Briscoe. … Gragson is the only one of the three top-ranked rookies making his series debut at Pocono this week. …There has been total manufacturer parity in the three-race Xfinity scorecard at Pocono with Chevrolet, Ford and Toyota all claiming one win. … Austin Dillon and Ryan Preece are the only Cup regulars on the entry list. A fulltime Cup driver has won the three previous Xfinity races at Pocono. 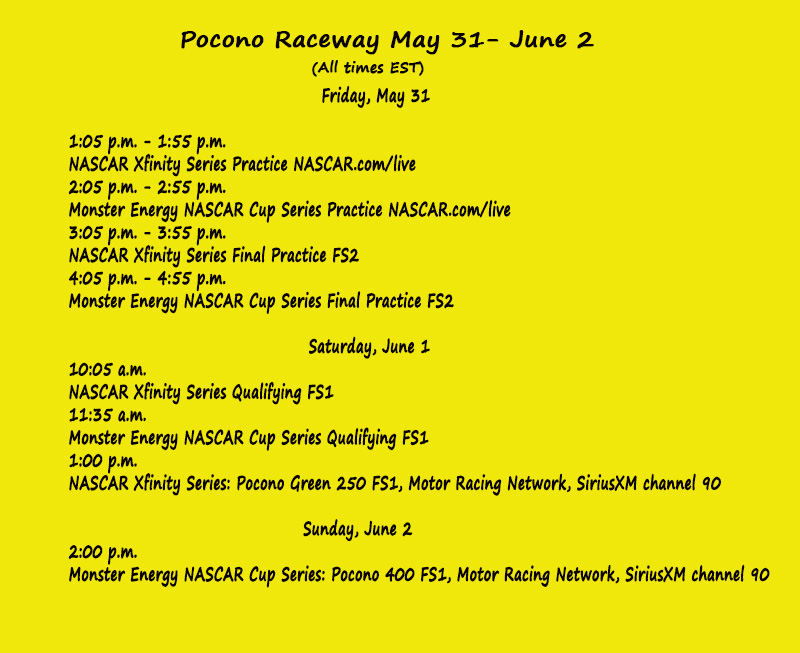