Denny Hamlin is not only the defending Southern 500 winner, but swept the 2017 weekend last September winning the NASCAR Xfinity Series race as well. He boasts the best average finish in the field and has an amazing 10 top-10 finishes in 12 Monster Energy Series starts at Darlington Raceway.

But Hamlin’s not only interested in celebrating the seven-decades of “Throwback” in this Sunday’s Bojangles Southern 500 (at 6 p.m. ET on NBCSN, MRN, SiriusXM NASCAR Radio), he’s intent on throwing it “forward.” He needs a win.

The driver of the No. 11 Joe Gibbs Racing Toyota Camry has won at least one race every season since he made it to NASCAR’s premier series in 2006. Seven-times he won multiple races in a season – including a career-high and 2008-best eight races.

But the perennially popular 37-year old Virginian is winless so far in 2018 and eager to change that at one of his best tracks.

History offers hope for Hamlin, who has two wins in the Monster Energy Series and five more in the NASCAR Xfinity Series and boasts the best average Cup finish (5.8) among drivers with more than one start at the 1.366-mile track known for being “Too Tough to Tame.”

“You know, there’s something about the racetrack that kind of suits my driving style,” Hamlin said last September in the winner’s press conference. “From the very first time I came here at a test, Tony Stewart was here, and kind of really helped me kind of find my way around this racetrack.

“I don’t know what it is about it, but it just suits the way I drive. You know, to be able to run a little bit of a unorthodox line I think helps me at this racetrack, and I think really just every time I come back, I learn a little bit more from what I did in the past, and it just refines the way you do things and you get a little bit better and it’s led to success.”

In keeping with the “throwback” tradition of Darlington, did you know that the deepest a race winner has started a race is 43rd. Johnny Mantz claimed that victory in the inaugural Cup race at Darlington in 1950 – in a field of 75 cars. Mantz won the race by nine laps. Fireball Roberts and Red Byron finished second and third and headlined an entry list that also included nostalgic racing names such as “Slick” Smith, who finished 33rd and “PeeWee” Martin, who finished 30th. As big as the field was – 67 of the 75 driver completed at least 200 laps.

While Sadler is still looking for his first win of 2018 – and first win since September, 2016 at Kentucky – he does boast the best average finish among the frontrunners (7.7) this year and his 19 top-10 efforts is also tied with Cole Custer for tops in the class. And Sadler has a victory at Darlington in 2016.

Ross Chastain is currently holding the 12th and final Playoff position with a 49-point advantage over Michael Annett. A new race winner from outside the top-12 in these next three weeks, however, would drop Chastain out of title contention. The Floridian will be making the first of three starts (also at Las Vegas and Richmond, Va.) this week in the No. 42 DC Solar Chevrolet for Chip Ganassi Racing. He has one previous top-10 in three starts at Darlington.

Monster Energy NASCAR Cup Series
Next Race: Bojangles Southern 500
The Place:  Darlington Raceway (Darlington, S.C.)
The Date: Sunday, Sept. 2
The Time: 6 p.m. ET
TV: NBCSN
Radio: MRN, SiriusXM NASCAR Radio
Distance: 499.1 miles (367 laps); Stage 1 (Ends on lap 100),
Stage 2 (Ends on lap 200), and Final Stage (Ends on lap 367)
What to Watch For: Defending Darlington race winner Denny Hamlin and seven-time 2018 race winner Kevin Harvick have finished top-five in this race in four of the last five years. … Clint Bowyer has only one top-10 finish in 12 Darlington starts and his three DNFs is most among the top-16 ranked drivers. … Hendrick Motorsports is the winningest organization at the track with 14 wins. … Chevrolet leads all manufacturers in Darlington trophies with 41. Ford is next with 28. Eleven different makes have won this race. … Kasey Kahne leads all active drivers with four pole positions at Darlington – the fifth highest mark all-time, tying him with Bobby Allison, Richard Petty and Geoff Bodine. Kahne is the only active driver to ever win consecutive poles at the track (2005-06). … Eight drivers won their very first pole here, including active drivers Clint Bowyer (2007) and Kurt Busch (2001). … The oldest Darlington winner was David Pearson who collected his 10th trophy in 1982 at the age of 47. … Matt Kenseth has the most starts (24) of any driver in this weekend’s field. He won the race in 2013. … Team Penske drivers Brad Keselowski, Joey Logano and Ryan Blaney are all looking for their first Southern 500 wins.

NASCAR Xfinity Series
Next Race: Sports Clips VFW 200
The Place: Darlington Raceway (Darlington, S.C.)
The Date: Saturday, Sept. 1
The Time: 3:30 p.m. ET
TV: NBC
Radio: MRN, SiriusXM NASCAR Radio
Distance: 199.9 miles (147 laps); Stage 1 (Ends on lap 45),
Stage 2 (Ends on lap 90), and Final Stage (Ends on lap 147)
What to Watch For: It’s a close battle for the championship bonus points. Four-time winner Justin Allgaier leads four-time winner Christopher Bell by five points in the standings. Elliott Sadler is 12 points behind Allgaier and Cole Custer is 13 points back – they are both still looking for that first 2018 win. … Six drivers have clinched their Playoff positions – Allgaier, Bell and Daytona winner Tyler Reddick have “won” their way in. Sadler, Custer, Daniel Hemric have already earned enough points to earn a Playoff spot. …This will be the Darlington debut for both Bell, 23, and Austin Cindric, who will be celebrating his 20th birthday on Sunday. … It may feel like a debut for Kaulig Racing’s Ryan Truex, who is making his first Darlington start since 2011. He finished 25th in that race. … There are five Monster Energy NASCAR Cup drivers entered this week: Denny Hamlin, Kevin Harvick, Brad Keselowski, Chase Elliott and Ty Dillon. Hamlin is the defending race winner – the first part of a weekend sweep last year at the track. He has won a series-best five times in the last 12 Xfinity races at Darlington. … Three drivers scored their first series victory at Darlington – Geoff Bodine (1982), Neil Bonnet (1983) and Ron Bouchard (1984). … Sadler’s 2016 win here is the last time a fulltime Xfinity Series driver hoisted the trophy. Chase Elliott did so in 2014 while competing in the series and they are the only two fulltime Xfinity drivers to win in the last decade. 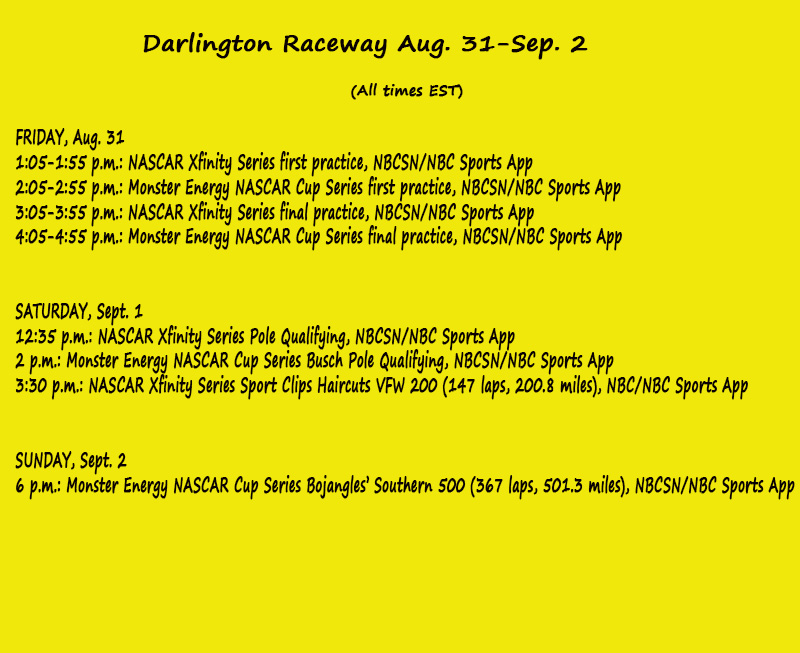