Brad Keselowski’s victory in last April’s STP 500 at Martinsville Speedway was as clutch as they come – earning his first ever win at the challenging half-mile track and Ford’s first trophy there in a more than a decade (28 races).

A thrilling duel with Kyle Busch in the final 60 laps earned Keselowski his second win of the very early 2017 season – a trophy to pair with his Atlanta victory only four weeks earlier. This season, Keselowski and his Team Penske teammates Joey Logano and Ryan Blaney arrive at NASCAR’s historic venue primed to shift the 2018 season into full gear.

All three drivers drove their Ford Fusions to top-eight results last weekend at Auto Club Speedway. And the .526-mile Martinsville track is a place where this trio of drivers makes a good case for victory.

Logano, who boasts four top 10s and a pair of top-five finishes through the first five races of 2018, has won the pole position at Martinsville in four of the last six races. Keselowski, who has collected a pair of top fives and three top 10s this year, is the defending race winner. And Blaney, who has three top 10s and a top five to date this season, scored his best-ever finish (eighth) at the track in last race there in November. He has three top-five finishes in five NASCAR Camping World Truck Series races at Martinsville, too.

Logano is still looking for his first Monster Energy Series win at Martinsville, but certainly must feel it imminent considering his track record. Not only has he won the pole award four times, he has led laps in his last eight starts – four times he’s led 50 laps or more. He’s finished in the top 10 in five of the last eight races and was fourth in the spring race last year as his Penske teammate celebrated in Victory Lane.

Bubba Getting Back On Track

Daytona 500 runner-up and fan favorite Darrell “Bubba” Wallace, 24, is eager to get his rookie Monster Energy NASCAR Cup Series program back on track following his celebrated season start. And “The Paperclip” at Martinsville may be just what he needs.

Wallace is ranked 19th in the points standings – one position ahead of fellow Sunoco Rookie of the Year contender William Byron. And the popular Richard Petty Motorsports driver couldn’t feel more positive about a venue than Martinsville. He’s won here twice in the Camping World Truck Series and that included his first NASCAR national series win in 2013.

“This is a really big weekend for us,’’ said Wallace, who will drive the No. 43 STP Chevrolet.

“STP is the title sponsor of the race and we are running the STP Chevrolet Camaro ZL1 that I helped design.

“I told the guys last week after California that I really want to win this one. I have two grandfather clocks [the trophy awarded to all Martinsville winners], but I need one in Cup.

“I love this track and the people. The (Wendall) Scott family, this is their home track too. So just a lot of history in this track. The King has so much history here too. Just a lot of great things going into the weekend.

Wallace’s 20th place finish at Auto Club Speedway on Sunday was his best showing since the spectacular Daytona 500 runner-up.

“We made a small step forward at California and I think we’re learning and getting better,’’ Wallace said. “I know what I need in the car this weekend, how it’s supposed to feel. I have a lot of confidence going into the weekend.’’

Martinsville Speedway has been a particularly strong breeding ground for NASCAR’s young drivers of late – especially in the Camping World Truck Series, which hosts the Alpha Energy Solutions 250 Saturday afternoon at the track (2 p.m. ET on FS1, MRN and SiriusXM NASCAR Radio).

This weekend the 19-year-old will have fierce competition from a pair of fellow teenagers, 17-year olds Harrison Burton and Todd Gilliland. Both of the other two Kyle Busch Motorsports drivers also have good reason to be optimistic at the half-miler.

What to Watch For: Reigning Monster Energy NASCAR Cup champion and current points leader Martin Truex Jr. is looking for his first win at Martinsville Speedway after 24 attempts. …Hometown hero Denny Hamlin (Chesterfield, Virginia) has tallied five of his 31 Monster Energy Series wins at Martinsville. …Kurt Busch’s win here in 2002 set a record for winning from the farthest starting position on the grid. Busch started 36th and led 111 of the final 112 laps to take the victory. …Jimmie Johnson is the winningest active driver with nine grandfather clock trophies. This week the seven-time champ is hoping to stop a career-long winless streak at 27 races. … Johnson’s Hendrick Motorsports team is the winningest organization to ever compete here, winning 24 races. Chevrolet – which Hendrick fields – leads all manufacturers with 56 wins at Martinsville.

What to Watch For: Timothy Peters will be making his 2018 debut this weekend. The veteran truck series driver scored the first of his 10 series wins at Martinsville in 2009. …. The father-son duo of David and Todd Gilliland will make their first NASCAR national series start together. David will driver the No. 54 Toyota for DGR-CROSLEY Racing and Todd will drive the No. 4 Toyota for Kyle Busch Motorsports. …Monster Energy Series driver Joey Logano’s only career truck series win came at this track in 2015. No Monster Energy Series full-timers are entered at Martinsville this weekend. 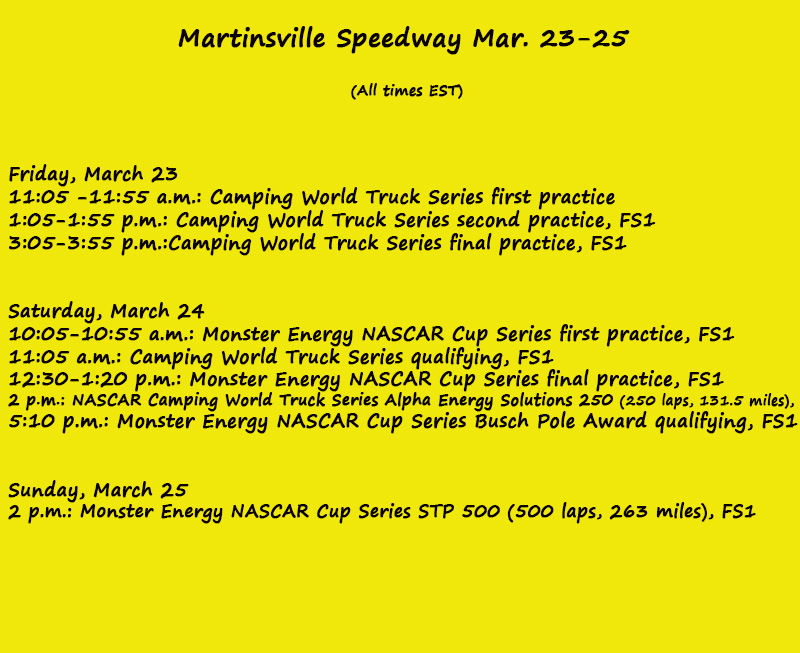