Kyle Larson did what few expected him to do Sunday. The newest driver in the Hendrick Motorsports stable who the NASCAR Cup series Pennzoil 400 at Las Vegas Motor Speedway in dominating fashion leading a race high 103 of the 267 laps winning by 3.1 seconds.

It was his first win on a 1.5-mile track, and his first with Hendrick Motorsports. Out of the 20 drivers who have won for the Hall of Fame owner, none have won their first race quicker than Larson who won in just his fourth start in the No. 5 Chevy. It was also the first Cup win for crew chief Cliff Daniels.

“It was such an awesome race car,” Larson said. “Cliff and everybody did a great job preparing this piece. It was so much fun to drive. I could go wherever I wanted to. I knew we had a really good car once we would kind of get single-filed out; but just drafting early in the run was tough.

“Thank you so much Mr. Hendrick, Jeff Gordon, and everybody at Hendrick Motorsports for the amazing opportunity I’ve been gifted.”

Brad Keselowski was second followed by Kyle Busch, Denny Hamlin who led the second most laps of the race 47, and Ryan Blaney in fifth.

“If Kyle Larson wasn’t here, we’d have had a dominant day, but they were really strong,” Keselowski said. “He’s got some really good equipment now and he’s going to keep showing it I’m sure.”

It was the seventh win of his career the last coming at Dover in October 2019.

Larson took the lead for the final time after a round of green flag stops with 61 laps to go. He tired to pit on the same lap as Keselowski and Hamlin but was forced to continue for another lap when a lap down car blocked his way.

“I had fun racing Brad and Denny and everybody,” Larson said. “Tried to give it away there coming to a green flag stop; but thankfully we were able to have a good enough car to hold them all off.”

The win also comes one day shy of his last race in 2020 with Chip Ganassi Racing last season.

Larson would finish fourth in that race with Ganassi. It would turn out to be the last race before NASCAR was forced to shut down all on-track racing due to the COVID 19 pandemic. During the downtime Larson was heard uttering a racial slur during an online race. He was subsequently suspended from NASCAR and fired from Ganassi Racing. Larson was re-instated late last year and hired by Hendrick to pilot the No. 5 Chevy which was brought back. The opening on the four-car team came as seven-time Cup champion Jimmie Johnson left the team to pursue racing in other forms of motorsports.

“I didn’t know if I’d ever have an opportunity to win a NASCAR race again,” Larson said. “To get this awesome opportunity with Hendrick Motorsports and Mr. H taking a massive chance on me, then going out there and being strong all year, it’s been great.”

The race featured 27 lead changes just one short of the track record. Keselowski won the first Stage, Larson the second. Kevin Harvick who started from pole never led a lap. A fender rub due to contact with another car on a re-start further slowed him; he finished 20th one lap down.

Reigning series champion Chase Elliott led 22 laps but had a solo spin exiting turn 2 with 99 laps to go while running 11th. The front of his Chevy made contact with the back of the Chevy of Kurt Busch and Elliott had just enough damage that he was forced to pit several times for repairs. He rallied but could manage a 13th place finish.

Larson’s win was a popular one, even among those he beat. Keselowski was the first to greet Larson after the race joining him on the frontstretch after Larson’s celebratory burnout.

“I think everybody loves a good redemption story,” Keselowski said. “He’s fought really hard for his opportunity to come back and making the most of it. I’m happy for him. I think I told him that, just happy for him.

“I wanted to win. I told him I wanted to win the damn race. But if I couldn’t, I’m glad he did. We’ve all been kind of pulling for him.”

The win also meant a great deal to team owner Rick Hendrick. Larson’s No. 5 was the same number as Hendrick’s son Ricky ran, and the paint scheme mirrored that. Ricky died in the 2004 plane crash that killed 10 people including Hendrick executives.

“My wife and I were watching,” Hendrick said. “It was emotional. It was joy. It was so many things. I love those colors. When we were going to be on the car, I mean, I wanted to run that paint scheme with that number. That meant a ton to me today and to my family just to honor our son.”

NASCAR stays out west and heads to Phoenix Raceway with the Cup series racing Sunday at 3:30 p.m. ET. 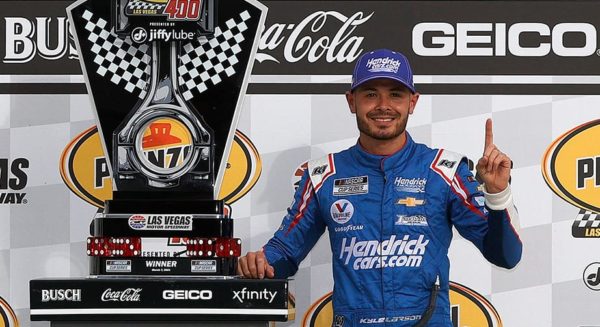