DAYTONA BEACH, Fla. – Kevin Harvick essentially told his fellow Monster Energy NASCAR Cup season dominator Kyle Busch – I’ll take your three race victories and raise you one.  And after taking his fourth win last week at Dover, Harvick can expect that Busch will be ready to try and match the effort this weekend at Kansas Speedway.

Harvick and Busch have won seven of the season’s first 11 races and the two former Cup champions have another four runner-up finishes between them too, dominating the 2018 season start in a way like no other in recent memory.

This week’s KC Masterpiece 400 at Kansas Speedway (May 12 at 8 p.m. ET on FS1, MRN, SiriusXM NASCAR Radio) presents an exceptionally good challenge for both Harvick and Busch, however, judging by their historical work on the 1.5-miler.

“Before three years ago, I’ve not had many opportunities to win at Kansas and hopefully we can get into Victory Lane there again this weekend with our M&Ms Carmel Toyota,’’ Busch said. “As you’ve seen so far this year, there are certain circumstances that can go against you and you just have to persevere and keep fighting until the checkered flag falls. We’ve won some races even though we hadn’t had the dominant car in a few of those.’’

“I think we’re pretty equal, honestly,’’ Busch said. “I think I’ve got to give them the notch a little bit. I think they’re a little bit better than we are.

“… A lot of it all comes down to execution when things are this tight with the 4 (Harvick) and us. They were able to execute better at the start of the year on their streak and also last week And we’ve been able to execute in order to get our wins.

“We haven’t been dominant each week, but we’ve been able to execute as a team – myself as a driver – to be able to get those wins.”

The 37 Kind Days 250 (May 11 at 8:30 p.m. ET on FS1, MRN, SiriusXM NASCAR Radio) has historically been one of the most unpredictable events on the NASCAR Camping World Truck Series schedule.

With 15 different winners in 17 races and only three former winners – Kyle Busch, Matt Crafton and championship leader Johnny Sauter – in the field this weekend, it may again prove too tough to call. And that’s always a good thing.

Toyota-powered trucks have won the last five races with Busch and Crafton responsible for two trophies each during that span at Kansas.

Now steering a Ford, Crafton may well be in line to break that Toyota streak. He’s won twice and finished runner-up twice in the last five Kansas races.

A victory would certainly be a big boost to the two-time former series champion who is ranked sixth in the points standings. The championship chase is tight entering Friday night’s race – only 35 points separate Sauter from fifth-place Noah Gragson, a 19-year old who won the pole position last week at Dover, Del. and was runner-up at Atlanta earlier in the season.

NASCAR Camping World Truck Series
Next Race: 37 Kind Days 250
The Place: Kansas Speedway (Kansas City, Kan.)
The Date: Friday, May 11
The Time: 8:30 p.m. ET
TV: FS1, 8 p.m. ET
Radio: MRN, SiriusXM NASCAR Radio
Distance: 250 miles (167 laps); Stage 1 (Ends on lap 40),
Stage 2 (Ends on lap 80), Final Stage (Ends on lap 167)
What to Watch For:  Kansas Speedway has proven to be a hard venue to predict victory. There have been 15 different race winners in 17 races and 13 different pole winners. …Matt Crafton and Kyle Busch have each won twice and both are entered in Friday night’s race. …Crafton has a series best eight top-10 finishes. … The top-five drivers in the championships standings are separated by only 35 points. Johnny Sauter holds a 29-point lead over second place Grant Enfinger. Fifth place Noah Gragson is 35 behind Sauter. …Six drivers among the top-10 are 25 years old or younger – ranging from 25-year old Brett Moffitt who is third in the points to 19-year old Gragson who is fifth in the standings. …The race has been won from the pole position only twice. Busch won from pole in 2014 and Ron Hornaday did in 2008. … Front row starters, however, have won eight of the 17 races. … There are three former winners entered this weekend – Busch, Crafton and series points leader Johnny Sauter, who won at Kansas in 2010. …Brandon Jones will be making his first truck series start of 2018. …The late Ricky Hendrick won the inaugural truck race here in 2001. 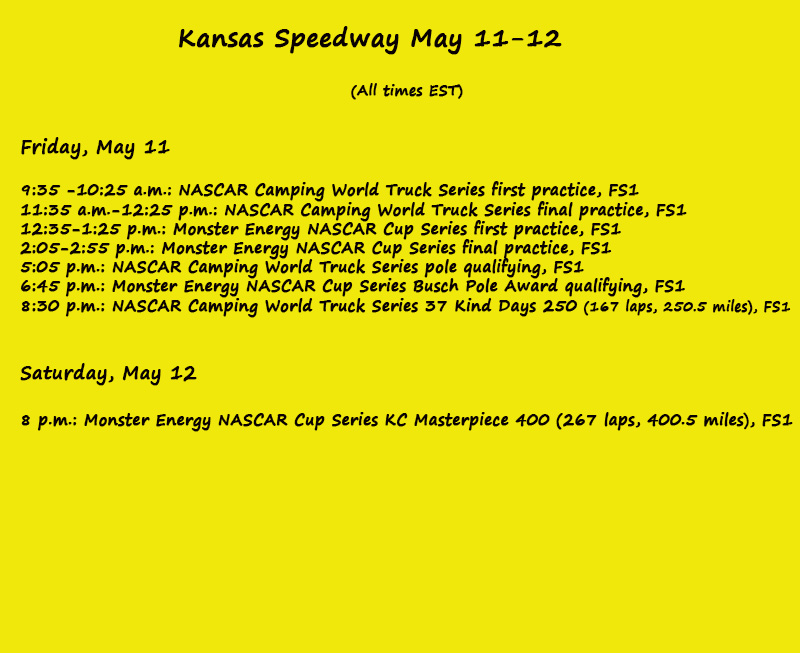