DAYTONA BEACH, Fla. – There are those that are pretty good and those that are really good. But when it comes to racing at Dover International Speedway, one who is greatest: Jimmie Johnson.

The 11-time Dover winner returns to the notoriously tough “Monster Mile” this week for the AAA 400 (2 p.m. ET. Sunday, FS1, SiriusXM NASCAR radio) looking to score his first win of the season – and first in the last 33 races. It’s not the typical set of circumstances for the seven-time Monster Energy NASCAR Cup champion. But his desire to win isn’t based on how long it’s been since he last won. He just likes to succeed and Johnson sure has hoisted a lot of trophies in Dover victory lane.

“I love Dover, wish we raced there more than twice a year, it’s a great race for this Lowe’s for Pros team and I absolutely cannot wait to get there,” the driver of the No. 48 Lowe’s for Pros Chevrolet said this week.

Johnson’s 11 victories are most all-time at the track. Should he win another race Sunday afternoon Johnson would have more victories at Dover than all the other competitors in the field – COMBINED.

Johnson is the only driver to earn multiple wins in the last 13 races, and during that span alone, he has won five times. His 3,105 laps out front is a record mark. It’s significantly more laps led at the track than anyone else on the list, which includes NASCAR Hall of Famer Bobby Allison (2,803), sure-to-be Hall of Famer Jeff Gordon (2,396), and Johnson’s fellow seven-time Cup champions Richard Petty (2,205) and the late Dale Earnhardt (2,151).

Since 2009, Johnson hasn’t gone more than four races at Dover without a victory. He easily leads the statistics in six of the nine categories kept by NASCAR including a driver rating of 118, which is a stunning 10 points more than any other competitor. His Hendrick Motorsports teammate Chase Elliott is next with 107.6 through four career starts at the track. Of those with a higher number of starts, Kyle Busch is next with 105.8.

A hard-fought 12th place finish at Talladega (Ala.) Superspeedway over the weekend moved Johnson up to 14th  in the 2018 Cup championship standings – his highest position yet after a frustratingly slow start. However, he has top-12 finishes in four of his last six races including a season best of third place at the challenging Bristol (Tenn.) Motor Speedway short track three weeks ago.

Of the four eligible to win the big money from Xfinity and Comcast, Allgaier has the best finish at Dover. He was runner-up in last year’s Fall race. He has seven top-10s in 14 starts. Sadler has the most starts (20) among the four and has finished in the top-10 in 10 of the last 12 years. A fourth place (Fall, 2012) is his best showing at Dover.

This weekend’s JEGS 200 (Friday, 5 p.m. ET.,FS1, MRN, SiriusXM NASCAR Radio) marks the long-awaited debut of Gilliland versus Gilliland in the Camping World Truck Series. David Gilliland, 42 and his 17-year old son Todd will compete together on NASCAR’s national stage for the first time.

David Gilliland, the 2007 Daytona 500 polesitter, also won the pole position for the 2018 season-opening truck series race at Daytona, driving on the superspeedway for his son who isn’t eligible to compete on the intermediate tracks or superspeedways until he turns 18. Todd’s birthday is May 15.

There is a lot of legitimate anticipation of Todd’s fulltime arrival in the truck series.   He finished 14th at Martinsville, Va. after starting 23rd in his only 2018 start last month. He has three top-10 finishes in seven career truck races, including a best of third place at Loudon, N.H. last year.

Gilliland is a two-time NASCAR K&N Pro Series West champion and last season nearly won both the series’ West and East championships. He had six victories and seven pole positions en route to the West title. He had four victories and 13 top-10 finishes in 14 races in the East division, finishing championship runner-up.

The Kyle Busch Motorsports driver has one previous truck series start at Dover, finishing 20th after retiring the truck midway through the race because of a mechanical problem.

Next Race: AAA 400 Drive for Autism

What to Watch For:  While 11-time winner Jimmie Johnson is the most accomplished driver at Dover, his 22-year old teammate Chase Elliott may consider the tough one-miler a reasonable place to score his first victory. He is tops in average finish (3.3) through four starts and is coming off a third place finish at Talladega, Ala. last week. …Kyle Larson’s runner-up showing to Matt Kenseth in May, 2016 (by .187-seconds) is the third closest margin of victory ever at the track. Larson has finished outside the top-10 only twice in eight races here. He was runner-up to Johnson last spring. …Johnson’s 2005 win over Kyle Busch (by .080-second) is the closest finish in Dover history. … Ryan Newman holds the record among active drivers with four pole positions here. He has won the race three times. …Reigning Cup champion Martin Truex Jr. scored his first series win at Dover in June, 2007. It is one of three tracks where he has multiple victories (also October, 2016). … Largely thanks to Johnson’s bounty of wins, Chevrolet has seven victories in the last 10 races at Dover. Toyota has three. Ford’s last win at Dover was by Matt Kenseth in May, 2011. … Talladega runner-up Kurt Busch score his best finish of the season as did Front Row Motorsports driver David Ragan (sixth). …Busch has the most Dover DNFs (seven) among the top-16 drivers. His younger brother, three-time Dover winner Kyle has six DNFs at the track. … William Byron is the highest ranked Sunoco Rookie of the Year candidate entering Sunday’s race. He is 20th following a 29th place finish at Talladega, Ala. and Darrell “Bubba” Wallace Jr. is 22nd, after a 16th place finish on Sunday.

Next Race: One Main Financial 200

The Date: Saturday, May 5

What to Watch For: The Sunoco Rookie of the Year battle in the Xfinity Series is closely tied to the series championship chase too. Tyler Reddick – who is second (-40) to points leader Elliott Sadler in the standings – retook the top rookie position following Talladega. He bested Christopher Bell on the superspeedway finishing eighth (Bell was 12th ) and also scored a stage win and earned stage points to give him a nine-point edge on Bell heading into Saturday’s race.  … Cole Custer has rallied from a season low 25th place in the standings to fifth place currently thanks to his seventh consecutive top-10 showing. And he’s never finished out of the top-10 in two Xfinity starts at Dover. … This week’s Xfinity-only field means that for only the third time in the last 20 years an Xfinity-regular will win the race. Chris Buescher and Regan Smith swept the 2015 races at Dover and are the only non-Cup drivers (at the time) to win during the past two-decades. … Because there are no Cup drivers in the field, it means there will be a seventh different winner in the last seven races. …. Judging by recent results, Dover is a place for winning streaks. Denny Hamlin won back-to-back in 2007-08 and Kyle Busch swept both races in 2010 and 2014. Joey Logano holds an all-time consecutive win record with four straight victories – he swept the 2012 and 2013 seasons). …

Should a new 2018 winner take the checkered flag on Saturday afternoon it would mark the 10th different winner in as many races to start the season – something that’s only happened once before in 1987. …Only three former winners are entered this weekend – Joe Nemechek (2003), Jeff Green (2001) and Morgan Shepherd (1986).

What to Watch For:  Fulltime Camping World Truck Series drivers have won the last three Dover races. …Chevrolet is trying to win two consecutive races here for the first time. Johnny Sauter won in 2017. .. Toyota holds the longest winning streak, taking seven straight trophies from 2008-2018. …The inaugural truck series winner at Dover (in 2000) was Kurt Busch. His younger brother Kyle – now a series team owner – is the only driver to win back-to-back races (2013-14) here. … Eleven of the 18 Dover winners have started from a top-five position on the grid. The pole position has resulted in three victories. 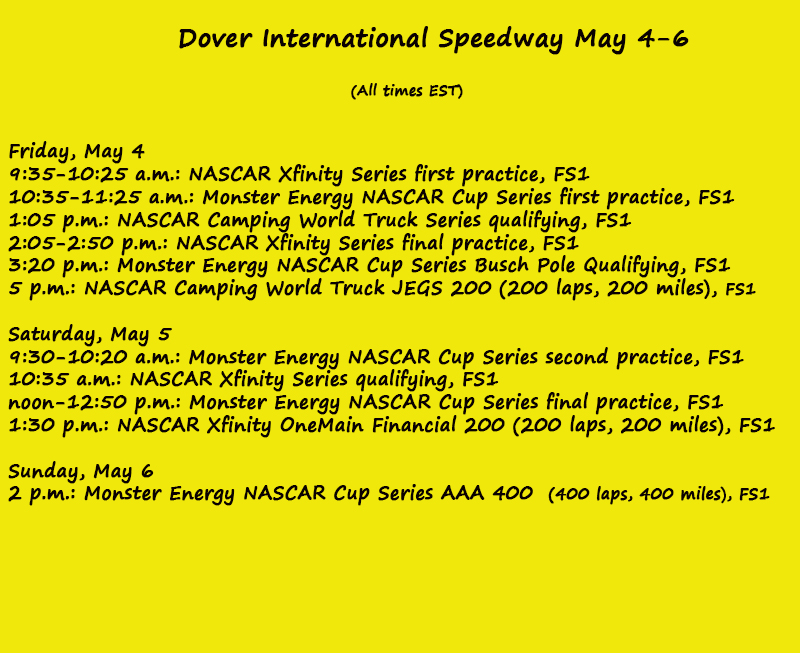