When Darrel Waltrip retired, he did so with a great deal of fanfare. In fact, it was sponsored. The “Victory Tour 2000” was hawked by K-Mart, Gatorade, Mountain Dew and Tide, the laundry detergent. There were diecast cars, stickers, t-shirts, and all other manner of merchandise to be had. The tour was an in-your-face, never-forget, affair with a multi-million-dollar marketing budget. It was meant to mirror the way Waltrip had been throughout his racing career; brash, loud, in-your-face. He was nicknamed “Jaws” not only for his aggressive style of racing on the track, but his outspokenness off the track.

The problem in that final year was that Waltrip’s on-track performance didn’t match the flash and hype fueled by that multi-million-dollar marketing budget.

In his final year Waltrip had 7 DNF’s, didn’t even qualify for 6 of the 36 races run, and had only one finish inside the top 20, that being an 11th that happened almost by accident at Indianapolis. The season turned out to be an embarrassing end for what was once a competitive driver, who finished outside the top 30 in most of the races he did start. At 53 years old, many felt Waltrip was way past his prime and that dismal final tour seemed to bear that out.

Jimmie Johnson started his fulltime career in the NASCAR Cup series two years after Waltrip. The first time I interacted with the young Californian was in the spring of 2002 at Charlotte Motor Speedway, which at the time was known as Lowe’s Motor Speedway. During that time qualifying was still a single car affair. To me it was akin to watching grass grow. I would almost rather be just about anywhere else than on pit road during qualifying. I had never bought into the “one car, one driver, pushing it to the limits” hype. Qualifying, to me, was a good time for lunch, or a nap. 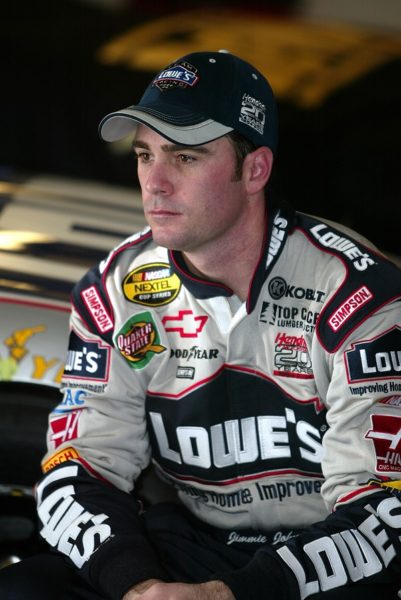 On that spring day however, I had been assigned by the newspaper I was a stringer for to get quotes from the top qualifiers. So there I was, standing in the media bullpen on pit road fighting off boredom.  The drill was that the driver who had most recently set the fastest lap stopped near the media bullpen, got out of the car and answered questions from the media while watching those behind try and beat the fastest time and knock that driver off the “provisional pole” which earned nothing.  If a driver went slower they were ‘lucky’ enough to avoid the bullpen; if they claimed the “provisional pole” they got to hang out with the media, at least until they were knocked off, or actually won the top spot.

Johnson had made one appearance in Cup at Lowe’s prior to that day. The prior season he had ran three races for Hendrick Motorsports starting 15th and finishing 39th in an unremarkable Cup debut.

That day Johnson, who also happened to be sponsored by Lowe’s, had just scored provisional pole, and was waiting to be interviewed. He stood behind the driver who had just been knocked off the provisional pole and was finishing up answering questions. It was then I noticed something odd, Johnson’s hand was shaking. It took me a moment to understand why.

I thought back to my time in the military when I decided to go “Airborne.” That meant going to jump school at Ft. Benning Georgia and jumping out of a perfectly good airplane. While I’ve never had many phobias, my biggest is the absolute terror, a genuine fear, or heights.  As in getting on the third step of a ladder makes me woozy, fear. Yet, I knew that if I wanted to earn those coveted jump wings (and the extra $150 a month of jump pay that went with them), I would somehow have to get my body to do what my mind told it not to do.

For those who have never been to jump school it’s a chaotic three weeks filled with high towers, PLF practice, tame sort of physical fitness training and finally the all-terrifying jump week. I was honestly able to get past the towers by closing my eyes, seriously. There could be no such avoidance when it came to the actual jump, however. As it turned out there was very little chance, or time, to worry about it. Packed into a C-141 with what felt like hundreds of other “legs” the time between “stand up, hook up” to “shuffle to the door” was lightning fast and in a flash I was floating gently under the Georgia sky. When that first jump was over there were of course plenty of high-fives and requisite “hooahs.” I noticed though my hands were shaking as I gathered my canopy. I realized that my adrenaline was flowing; my body had ignored what my mind said it shouldn’t do. It was the first time I could remember feeling an adrenaline “high.”

I jumped over 2,800 times after that first one. Most of those were freefall, and while I was always confident and a bit nervous, I was able to push though it and the post jump adrenaline “high” became the norm; something I actually came to embrace. I did it, I survived another one.

Flash forward to that spring day in Charlotte. Johnson was 27 years old at the time and I realized this young driver’s hand was shaking because he was on an adrenaline high. He had pushed himself, and that car, beyond what his mind told him could be done and he had survived. It made me realize that during those single car qualifying runs what I, and everyone else, was observing was far from boring at least from the driver’s point of view. The driver was pushing everything beyond the limit of what was expected. It made me realize that perhaps that’s what separated successful race car drivers from the rest of us. Their willingness to push beyond the edge, leaving them with shaking hands.

Johnson would win the pole that day, the third in the first twelve races of his debut season. And I gained a much better appreciation of just what the drivers go through and never watched qualifying, or racing, the same way again. Johnson would teach me, and a great deal of all of us, many lessons throughout the years. The exact opposite of Waltrip, Johnson is quiet, unassuming, and humble. He let his brashness show on the track.

Since that day in Charlotte I have had many encounters with the seven-time champ. Whether he was answering questions in a formal press conference or just hanging out talking about nothing in particular and showing off pictures of his girls on his phone, Johnson was the same guy. He could be the popular co-worker to anyone, the kind who’d hang out after work on a Friday just to drink a beer and shoot the breeze.

In many ways, Johnson could be the template for how anyone should conduct themselves, in their job, and in life. There is no “boogity, boogity, boogity” in his vocabulary, and there was no sponsored “Victory Tour.” Had there been, the sponsor would have probably asked for a refund after the year the world has had.

Sure, his on-track performance hasn’t been where he, and everyone else, is used to, but he has at least remained competitive. In many ways though Johnson was robbed of a proper final fulltime season. No fans at most tracks, and although he was given all manner of farewell gifts from pictures, to streets, tunnels and hiking trails, there is little doubt that had he simply stepped out of the car at Homestead after the last race last year and announced that he was done, we would have all understood.

Of course, sponsors, fans, and even the industry couldn’t let Johnson do such a thing. He needed, and deserved, to be celebrated. The everyman’s man couldn’t simply ride off into the sunset without us all at least getting a chance to say goodbye.  So goodbye Jimmie Johnson. At just 45 years old there is still plenty of life to live, and races to run. In the coming years I won’t be surprised to see you, hair flecked with grey, standing outside a race car after a qualifying run with your hand shaking, and a smile on your face as you enjoy that adrenaline high. 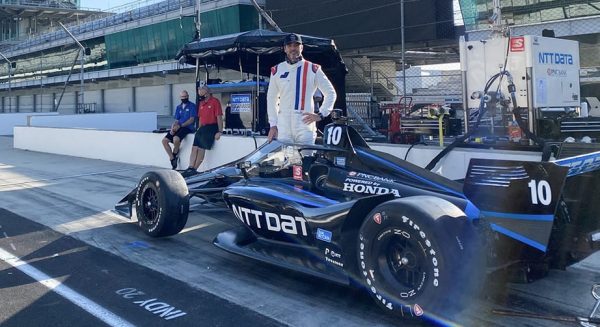