The caution never happened. Chase Elliott capped off a dominating performance Sunday leading a race high 153 of 312 laps at Phoenix Raceway to win the final race of 2020 and secure the 2020 NASCAR Cup series championship.

Elliott took the lead for the final time on lap 270 after the final round of green flag pit stops. Unlike the previous two evenings that saw late caution periods that decided the titles in the NASCAR Truck and Xfinity series, Sunday’s final stage ran completely under green with Elliott cruising to 2.7 second lead over Brad Keselowski.

“Just waiting on the caution, as always,” Elliott said. “You know, I saw Joey was pretty loose there and felt like I needed to get to him while I could. I knew I’d been kind of tight on a longer run and he was probably going to get a little better.  Just unbelievable.

“I mean, I just never would have thought that this year would have gone like it has. I mean, NASCAR Cup Series champion; are you kidding me? Unreal.”

Keselowski seemed to have the short run speed and was able to keep up to Elliott at times, but slow pit stops left him trying to catch up all race long and left him as the runner up.

“I would have liked to have had one of those late race yellows like we saw in the Truck and Xfinity race,” Keselowski said.  “I thought we were pretty good there, just didn’t have the track position to make it show. I thought we had a shot at the end of the second stage and just couldn’t keep it up in spot to keep it where we could have a lead. Really proud of the speed we had.  Just a solid day and just wish we had one more spot.”

Joey Logano led the second most laps on the day 125 but in the end fell short and had to settle for third.

“Man, just didn’t have the speed at the right time,” Logano said. “Our pit crew was on it.  Our strategy got us out front there at the end. The 9 (Elliott) seemed like he really lit off pretty good there.  That last run was able to go really fast.  And got another vibration towards the end of the run and lost the turn.  Still a little free.

“It stings not winning, I’m not going to lie, it hurts, but at the same time we’re stronger because we went through it.”

Denny Hamlin, the fourth driver in the Championship 4 never had a car to contend for the win and was fourth.

“We were a little off handling, but overall car speed, we just didn’t have enough,” Hamlin said. “Our next best teammate was 10th, so as an organization we have got to get a little better, especially on the short tracks. It seems like we were a little bit off all year, and that was all it had, that’s for sure. I was pushing for everything I had.”

The emotional day began with Jimmie Johnson being feted as he started his final race. The 7-time champion finished the day fifth stopping on the track to congratulate his Hendrick Motorsports teammate in a passing of the torch.

“Oh, my gosh, to share a moment like that in Jimmie’s last race and to win and to lock the championship,” Elliott said.  “Those are moments you can only dream of.  You know, and this is a dream. I’m just hoping I don’t ever wake up.”

In a must win situation, Elliott secured his place in the Championship 4 just a week prior with a win at Martinsville Speedway. With that momentum Sunday he became the third-youngest Cup Series champion in NASCAR history. Only Jeff Gordon, who claimed his first title at 24 years, three months and eight days old in 1995, and 1950 champ Bill Rexford (then 23 years old) were younger.

“Championship crew chief, Alan Gustafson, is now a NASCAR Cup Series champion, and very deserving.  I just can’t say enough about our group.  I felt like we took some really big strides this year, and last week was a huge one.  To come out of that with a win and a shot to come here and have a chance to race is unbelievable.

Elliott scored two wins in NASCAR’s regular season, which was upended and delayed by the COVID-19 pandemic. His first win came at Charlotte in May after NASCAR’s return and followed that up on road courses, at Daytona and Charlotte. He came into Martinsville below the cutoff line led a race high 236 laps winning a spot in the Championship 4.

The Martinsville win gave Elliott the pole for the final race Sunday, but Elliott’s Chevy failed pre-race inspection twice and he was forced to start at the rear of the field. Elliott was fifth by lap 40 and took the lead for the first time on lap 119.

Elliott now joins his dad as a NASCAR Cup series champion. They are the third father-son duo to win Cup Series titles, joining Lee and Richard Petty, and Ned and Dale Jarrett — all NASCAR Hall of Famers.

“He told me, ‘all you have to do is beat three people’,” Elliott said of father’s pre-race advice. “He said all week he felt confident that we could come out here and do this. And he was right.

“This is a moment I’ve dreamed about. This is all I’ve wanted to do is be a race car driver and race in NASCAR. To be honest, I’m humbled.” 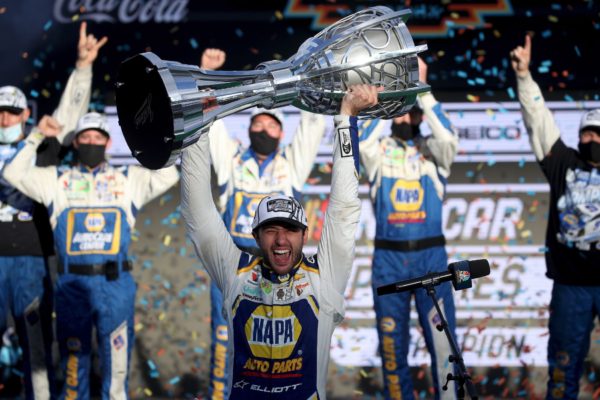