Thanks to rain, it was a long days night at Daytona Thursday and early Friday.  The first of the two Duel races that are used to set the field for Sunday’s Daytona 500, belonged to Aric Almirola who led 52 of the 60 laps and held off a last lap charge by Christopher Bell in a caution free run. Ryan Newman and Joey Logano were third and fourth.

“This thing was a hot rod,” Almirola said. “I’m so proud of these guys on this race team.  Our race car is so fast.  I’m proud of everybody at Stewart-Haas Racing.  We’ve got an incredible race car and I can’t wait for the Daytona 500.

The drama was for the open spot in the field. It went to Austin Cindric who went a lap down after being penalized for speeding during the races only pit stops on lap 35. Ty Dillon was running fifth most of the race and was locked in the 500, but on the final lap, Ryan Preece charged forward beating Dillon by .004 of a second and taking the fifth spot. With Preece being the leading open finishing car, the car with the next fastest time in Wednesday’s qualifying inherited the final starting spot from Duel 1. That belonged to Cindric who had been faster than Dillon Wednesday.

“I get the bonehead of the race award,” Cindric said. “Speeding in the last section of pit road when I nailed everything else the whole night that I didn’t know how to do, so my guys can all have a shot punching me wherever they want to, but I’m obviously really happy to get our Verzon 5G Ford Mustang into the big show.  There’s a lot left for me to learn but racing on the biggest stage against the best drivers is an amazing opportunity.”

Three time and defending Daytona 500 winner Denny Hamlin stayed towards the back of the field most of the race. On the final lap while running fourth, he slowed, seemingly out of fuel. His Toyota slowed to a stop at the turn 1 side of pit road and was scored 13th.

Alex Bowman, who won the Daytona 500 pole Wednesday, slowed with 29 laps to go and pitted. He reported a vibration, but after a check, the crew sent him back out. He was scored 20th four laps down. He will keep his pole position Sunday unless the crew has to change an engine or transmission.

The only incident came on the final lap when Cole Custer was spun towards the back of the field coming out of turn 2 and smacked the wall. He finished 14th on the lead lap; there was no caution. The crew was later forced to take out a backup car and he will start from the rear of the field Sunday.

Before the drivers for the second Duel could even be introduced the rains came and everything was put on hold. During the ensuing track drying the bizarre sight of an air titan sliding down the banking in turn 4 and getting stuck kept everyone entertained while the track was being dried.

After a nearly three-hour delay, just after 11:00 p.m. eastern William Byron led the field to the green and lead 34 laps in a race that saw much more aggression than the first. Byron would swap the lead at times with Bubba Wallace, Kevin Harvick, and Martin Truex Jr. 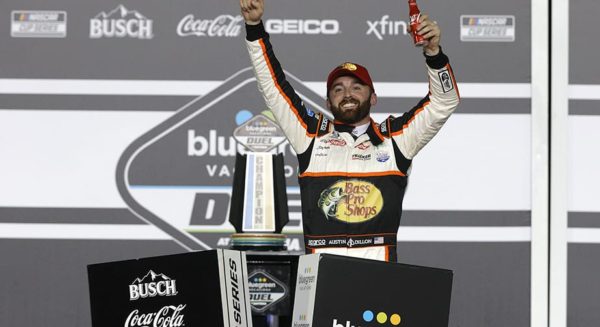 Unlike the first Duel, the second saw a caution just past the halfway point when Chase Briscoe spun coming out of turn 2 and collected Anthony Alfredo, Garrett Smithley, Kaz Grala and BJ McLeod. Alfredo and McLeod were out while Briscoe, Grala and Smithley were able to continue.  Grala, Smithley, Noah Gragson and David Ragan were the open cars needing to race for the final two spots. With Ragan already locked in by virtue of his qualifying speed the final spot was up for grabs. After the first crash, Grala fell two laps down and appeared to be out of the running.

Gragson and Smithley swapped positions behind Ragan until the final laps.  Two laps before the end, as the field crossed the line, Smithley got down into Brad Keselowski who was sent up and into Gragson. Gragson’s race was done, as were his hopes for making the Daytona 500. Smithley was also too damaged to continue handing the final Daytona 500 spot to Grala. Byron was also caught up in the melee and finished in the garage. His Hendrick Motorsports team will need a backup car forcing Byron to give up his front row starting spot as he moves to the rear.

The crash led to an overtime finish. Truex and Wallace swapped the spot with Wallace taking the lead and keeping it out of turn 4 on the final lap.  Austin Dillon charged forward and made a bold move diving down to the bottom of the track and winning by .057 of a second over Wallace.

“I was talking to my spotter, Brandon Benesch, about having the No. 4 car behind us on the final restart since he had been pushing well all night,” Dillon said. “I knew he had another Ford behind him though, so it was going to be tough. I made a decent block down the backstretch and got a big push after that. I knew the No. 23 was going to try to block me as we came to the line but I just whipped the wheel, and it all worked out. It’s going to be a great feeling rolling off Sunday up near the front row, and I’m hopeful we can have a similar result that evening.”

Despite leading laps in the debut with his new team, Wallace was disappointed in his second place run.

“A lot of mistakes,” Wallace said. “A good debut, but nothing to be really happy about for myself. It’s okay for drivers to be hard on themselves. That’s how we motivate ourselves to go out and do better.”

The Cup series will have a final practice on Saturday before Sunday’s Daytona 500.