NASCAR’s annual swing out West may as well be considered a “Home Sweet Home” stretch for many of the Monster Energy NASCAR Cup Series drivers.

The sport had its beginnings as primarily a “Southern” institution, but for decades its westward expansion has produced thrilling tracks in new locations and all kinds of championship entrants hailing from the West. In fact, this week’s driver entry list has 11 drivers from west of the Mississippi River – including five drivers from California. That’s almost as many from California as NASCAR’s hub North Carolina (six drivers).

When it comes to the races out West, such as Sunday’s Pennzoil 400 presented by Jiffy Lube at Las Vegas Motor Speedway (at 3:30 p.m. ET on FOX, PRN, SiriusXM NASCAR Radio), next week’s stop at ISM Raceway in Phoenix, Ariz. and the following week at the Auto Club Speedway in Fontana, Calif., drivers from the western half of the country have really shined.

Doing well in front of the hometown crowd has been a recurring theme.

Joe Gibbs Racing driver and Las Vegas native Kyle Busch will have three shots at a trophy this weekend. The 2015 Cup champion is competing in all three NASCAR races – all events he’s won before.

He started his career on the speedway’s short track, has won one race in all three of NASCAR’s major series in Vegas (Cup, 2009, Xfinity, 2016, Gander Outdoors Truck Series, 2018) and considers his next challenge to win multiple races in one weekend there. And he’s certainly on a roll, earning his 52nd Gander Outdoors Truck Series victory last week making him the all-time winningest driver in both the Trucks and Xfinity Series, where he has 92 victories.

“You want to win any weekend, but especially when it’s in your hometown and you remember this track being built from the ground up and the hole being dug in which it sits right now,” said Busch, who Thursday announced a sponsorship extension from Mars Inc. for his No. 18 Toyota.

“I was able to win in the Truck Series there last year for the first time and hope we can keep the momentum from last year and win again, and of course win Xfinity and win Cup. I’ve been close to a lot of Xfinity wins there and I’ve only been able to close one out and Cup wins we haven’t quite been as great. … It would certainly be special to close it out and win a triple in your hometown. That would be pretty awesome.”

And there is plenty of precedent for the West Coasters during this swing in the schedule. Twelve of the 22 Cup races previously held at Las Vegas have been won by drivers whose hometown is located West of the Mississippi. It’s an even more frequent occurrence at Auto Club Speedway in Fontana, Calif. where 20 of the 29 race winners have been Westerners, including four of the last six.

And more than half – 25 times in 45 races to date on the Phoenix miler – have hometowns been from the Western half of the country.  That included 10 consecutive race winners between 2005-09 – Las Vegas natives Kurt and Kyle Busch, Californians Kevin Harvick, Jeff Gordon and Jimmie Johnson and Arkansas native Mark Martin. Last year was a West Coast sweep with Harvick and Kyle Busch.

Busch’s older brother, 2004 Cup champion, Kurt Busch smiles at the thought of winning at his hometown track in Las Vegas. He’s got a Cup championship and won the 2017 Daytona 500, but Busch would really cherish a trophy hoist in his native Vegas.

“I would love to win there,” said Kurt Busch, driver of the No. 1 Chip Ganassi Racing Chevrolet. “I have always put too much pressure on myself at Vegas. Now with the second date in the Playoffs that helps with the routine and getting that track to feel like all the others when we are out on the tour. So, I’m hoping so.”

Last year’s races at Las Vegas featured a Chip Ganassi Racing team sweep with defending winner of Saturday’s Boyd Gaming 300 (at 4 p.m. ET on FS1, PRN, SiriusXM NASCAR Radio) Kyle Larson and Ross Chastain. While the team isn’t competing this weekend, Chastain will be on track in the No. 4 Chevrolet for JD Motorsports.

Back atop the championship standings, as he was so much of last year, is Joe Gibbs Racing driver Christopher Bell, who holds a slim four-point edge over Brandon Jones entering the race.

As with Larson and Chastain last year – who led 142 and 180 laps respectively in their Las Vegas victories – the race winners, specifically, have recently proven themselves the class of the field. You have to go all the way back to Ricky Stenhouse Jr.’s win in 2012 – when he led 55 laps-  to find a race winner that didn’t lead at least 100 laps.

The only previous winners entered this weekend include Chastain, and fellow Cup regulars Austin Dillon (2013) and Kyle Busch (2016), who is competing in all three series races at his hometown track.

Defending race winner Kyle Busch will start his tripleheader duties in Friday’s STRAT 200 (at 9 p.m. ET on FS1, PRN, SiriusXM NASCAR Radio). The hometown favorite has made only two starts in this series at the track.

Predicting a winner on the Vegas 1.5-miler has proven to be as difficult as winning big in a nearby casino. Ten different drivers have won in the past 10 years. And historically speaking, there have been some major upsets such as when John Wes Townley scored his only major NASCAR victory in this race in 2015 and Nelson Piquet Jr. won in 2012 – neither of those drivers led the most laps on the day.

Grant Enfinger, the most recent Vegas winner (September, 2018) holds a slim one-point edge on Daytona winner Austin Hill in the championship standings with fellow former Vegas winners Ben Rhodes (2017) and Johnny Sauter (2009) on his heels. Rookies such as Harrison Burton and Sheldon Creed are keeping the field honest, boasting promising starts right from the first green flag. Burton is ranked fifth in points and Creed is 10th.

What to Watch For: Kevin Harvick’s dominating win in this race last year set a record for Most Laps Led (214). … Jimmie Johnson is the all-time winningest driver at Vegas with four victories. He won three consecutive races from 2005-07, answering a two-race sweep by Matt Kenseth immediately prior (2003-04). … Jeff Burton is the only other driver to win back-to-back (1999-2000). … Six drivers have won multiple times at Vegas – Johnson (4), Kenseth (3), Brad Keselowski (3), Kevin Harvick (2), Burton (2) and Carl Edwards (2). That means 16 of the 22 Vegas races have been won by six drivers. … Johnson boasts the best driver rating at the track (106.7) followed by Kyle Busch (102.6) and Harvick (100.4). … Only one time has this race been won from the pole position – Kyle Busch in 2009. The Las Vegas native Busch brothers – Kyle and older brother Kurt – have won two pole positions each and are the only multi-time pole winners. …. The closest Margin of Victory is .045-seconds when Johnson beat Kenseth in 2006. …Aric Almirola (March, 2007) and Kyle Busch (March, 2004) both made their Cup debuts at Las Vegas. … Ryan Blaney has the best average finish (8.4) in this weekend’s field, followed by reigning Cup champion Joey Logano (9.2) – they are the only drivers averaging less than 10th. … Kyle Busch and Johnson are tied for most top-fives (six) and Johnson and Ryan Newman are tied for most top-10s (nine). …. Newman has completed the most laps (4,868) of all-time at Vegas. …. Johnson has never had a DNF in 18 starts. … Ford has won three of the last four races and four of the last six, sweeping the 2018 season.

What to Watch For: Kyle Larson is defending winner of this race and Ross Chastain won the Fall race at Las Vegas – giving Chip Ganassi Racing the 2018 Vegas sweep. … Christopher Bell leads the points standing by four points over Brandon Jones, 18 points over Justin Allgaier and 19 over reigning series champ Tyler Reddick. … Bell also boasts the best driver rating (117.3) but Allgaier holds that distinction (106.1) among those with more than three starts. …Allgaier is also tops in the series in Best Average Finish (6.444) and most top 10s (eight). … Kyle Busch, who will be competing in the series this weekend as part of a tripleheader at his hometown track, has led the most laps at Vegas (521). … NASCAR Hall of Famer Mark Martin has the most wins (four). … The only two drivers to score their career first series win at Las Vegas are the track’s very first Xfinity Series winner Jeff Green (1997) and the most recent, Chastain (2018). … Only three times has the race winner started from a grid position outside the top-10. The last six race winners started fifth or better and include two pole winners. … Leading laps has been a consistent sign for triumph at Vegas. The last seven race winners have led at least 100 of the 200 laps, including a record 199 laps led by Kyle Busch in his 2016 win. … Chevrolet has won five of the last 10 races, Ford has won four and Toyota’s lone win in that timeframe came in 2016 with Busch.

What to Watch For: Grant Enfinger holds a one-point lead over Austin Hill in the Gander outdoors Truck Series driver championship. Enfinger is the only driver in the field to have scored top-five finishes in the season’s opening two races. … Defending series champion Brett Moffitt is ranked seventh in a three-way tie. … Kyle Busch is the defending race winner, earning his first Truck Series win – from the pole position – in two series starts at his home track. … There are five former Vegas winners entered this weekend (Enfinger, Busch, Ben Rhodes, Timothy Peters and Johnny Sauter). … Only two drivers have ever won multiple races at Vegas – Jack Sprague (who won the inaugural event in 1996 and then again in 1998) and Mike Skinner (2006 and 2008). … Among the series regulars, Johnny Sauter boasts the best driver rating (102.9) at Vegas followed by reigning series champ Brett Moffitt (100.8). … Former two-time series champion Matt Crafton has led the most laps (132) of anyone in Friday’s field and has the most top-five (seven) and top-10 (11) finishes. Crafton has never won at Vegas, however. … The last time the pole winner won this race was 2011 – NASCAR Hall of Famer Ron Hornaday Jr.  … The driver who leads the most laps has won the last two races (Busch and Enfinger) here. However in the last 10 years, only four times has the driver who led the most laps won the race. … Twice in that time (in 2015 and 2013) Crafton led the most laps but did not win. … John Wes Townley’s win here in 2015 was the only victory of his NASCAR career. … Rookie Harrison Burton is off to a strong start, ranked fifth in the championship, only 24 points behind Enfinger. … There have been 10 first-time Vegas winners in the previous 10 races here. … In that time, both Chevrolet and Toyota have won four races while Ford has two victories, including the last with Enfinger. 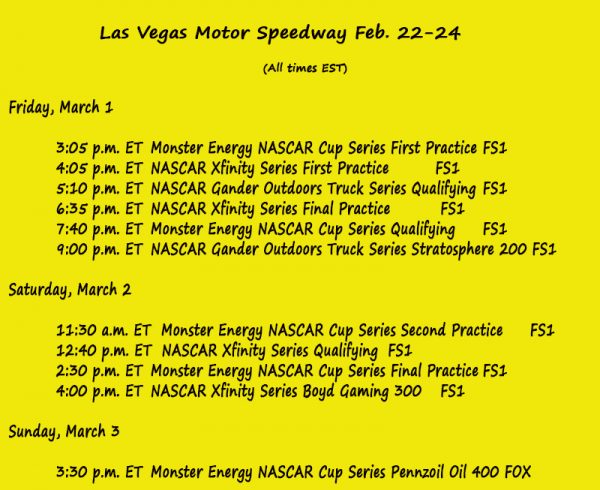