Three of the final four Playoff positions are still up for grabs as the Monster Energy NASCAR Cup Series breaks in the new-look one-mile oval that has historically produced all the excitement you’d expect for such an important championship set-up.

Only Team Penske’s Joey Logano has secured a position in the Championship 4 that will ultimately vie for the 2018 Monster Energy NASCAR Cup championship at Homestead-Miami Speedway on Nov. 18.

A major penalty this week for the No. 4 Stewart-Haas Racing team negated Kevin Harvick’s win at Texas Motor Speedway last weekend in counting toward the championship race eligibility. And a 40-point penalty means the nine-time ISM Raceway winner goes from an automatic championship berth to falling to fourth place in the standings – a mere three points up on fifth place Kurt Busch.

Traditionally, the Phoenix oval has been Harvick’s playground. He has nine Cup victories there, including one just this spring. He is the last driver to sweep a season at Phoenix, doing so in 2014 – the year he won the Cup championship.

The track’s reconfiguration – which debuts this weekend – could be the ultimate wild card, however. In addition to new fan amenities, the track itself has a new look. The start/finish line is now located just beyond what used to be Turn 2, in front of the new main grandstands. The former Turns 1 and 2 are now Turns 3 and 4 – and vice versa.

“I’m telling you I think moving the start-finish line is going to be a bigger deal than anyone thinks,” Stewart-Haas Racing driver Bowyer said. “I’ve raced at a lot of racetracks all over the country and I have never seen a start-finish line right out of the corner. It’s very, very unique and it’s going to be interesting to see how it all plays out.”

“I think where you will see that really play out is on restarts and finishes. How it comes down to that last-lap pass for a position to maybe put yourself in the Playoffs or something – you kind of just have to make it out of that corner. You just have to kind of have forward momentum to make it across the line. That, in my opinion, can bring on some wild, wild things, I think, over the next few years there.”

The NASCAR Xfinity Series boasts one of the most dramatic Playoff runs in the sport with five of the top-six drivers in the standings separated by a mere 14 points. Only Stewart-Haas Racing driver Cole Custer has secured a position in the foursome that will compete for a series title Nov. 17 in Homestead, Fla.

It’s essentially a must-win for sixth ranked Bell who is 34 points behind leader Tyler Reddick. But Bell boasts the most Playoff victories this season (at Richmond, Va. and Dover, Del.). Allgaier is only 12 points behind Reddick and won at Phoenix in the Spring, 2017 race.

Should Reddick maintain his position in the standings, he would become the fourth rookie to earn a spot among the Championship 4 at Homestead-Miami.

William Byron won this race last year and then the championship the following week.

Championship on the line

He goes into Friday’s Lucas Oil 150 at ISM Raceway (8:30 p.m. ET on FS1, MRN, SiriusXM NASCAR Radio Channel 90) as a strong championship favorite, sharing final round victory circle honors with two-time series champion Johnny Sauter, who punched his ticket to the Homestead-Miami title race with a victory two weeks ago at Martinsville, Va.

Haley’s win moved him from being on the outside of the championship picture in fifth place, to being a strong candidate to hoist his first series championship trophy. It leaves Grant Enfinger (who had been ranked fourth before Haley’s win) into fifth place in the standings, 18 points behind fourth place Noah Gragson. And two-time former series champion Matt Crafton is sixth in the standings, 23 points behind Gragson.

Sauter, who won this race last year, is the only member of the championship contenders to earn a victory previously on the Phoenix one-miler.

What to Watch For: Kevin Harvick is the all-time winningest driver at ISM Raceway with nine victories. A win this weekend for Harvick would make him the sixth driver in history to score 10 wins at a track, and the first to do so at Phoenix. NASCAR Hall of Famer Richard Petty won at least 10 races at five different tracks. … Harvick has double the number of victories as Jimmie Johnson (four wins) at Phoenix, but the two are tied for most top-five finishes (15) and top-10 finishes (20). … Harvick is the last driver to win at Phoenix and then go on to win the Monster Energy NASCAR Cup championship (2014). Johnson did it three consecutive seasons (2007-09). Dale Earnhardt was the first to do so (1990).  ….Harvick has the most Playoff wins at Phoenix (four). …. Matt Kenseth is the defending race winner. He returns to the No. 6 Roush-Fenway Racing Ford this weekend. ….Johnson and Kyle Busch have the most runner-up finishes (three) among active drivers at Phoenix. … Only four drivers entered this week have won multiple times at Phoenix and Harvick is the only one among them currently in the Playoffs. Others include (Johnson, 4 wins), Ryan Newman (two wins) and Kenseth (two wins). …. Seven of 44 races at the track have gone into overtime. The last Playoff race to have that happen was in 2016 when Joey Logano beat Kyle Busch for the win. … Harvick (744 laps) and Johnson (596 laps) are ranked 1st and 2nd in Playoff race laps led. Their totals represent 32.2 percent of all Playoff race laps. ….Four times non-playoff drivers have won the Fall race – Kyle Busch (2005), Kasey Kahne (2011), Dale Earnhardt Jr. (2015) and Kenseth (2017). …Chase Elliott boasts the top average finish at the track (6.8). This weekend marks his crew chief Alan Gustafson’s 500th Cup race in that position. He is second only to Johnson’s crew chief Chad Knaus who has 633 starts. ….Alan Kulwicki won the very first race at the Phoenix track in November, 1988. … The closest Margin of Victory (MOV) is .010-second when Harvick beat Carl Edwards in March, 2016. … Hendrick Motorsports is the winningest organization at Phoenix with 10 victories. … Ricky Rudd won the race in 1995 from the farthest starting position (29th) on the grid.

NASCAR Xfinity Series
Next Race: Whelen Trusted to Perform 200
The Place: ISM Raceway (Phoenix, Ariz.)
The Date: Saturday, Nov. 10
The Time: 3:30 p.m. ET
TV: NBC
Radio: MRN, SiriusXM NASCAR Radio
Distance: 200 miles (200 laps); Stage 1 (Ends on lap 45),
Stage 2 (Ends on lap 90), and Final Stage (Ends on lap 200)
What to Watch For: Cole Custer’s win last week at Texas makes him the only Xfinity Playoff driver with an automatic ticket to the Homestead-Miami Speedway championship next week. …. Points leader Tyler Reddick holds an eight-point edge on fourth place Daniel Hemric, who is 12 points up on regular season champion Justin Allgaier and 14 points up on Matt Tifft. … William Byron won this Phoenix Playoff race last season and went on to capture the series championship the next week. …. During the Playoff portion of the schedule, Hemric has led all the playoff contenders in average finish (6.4) and laps led (232). His average finish at Phoenix of 6.0 is best among Playoff drivers with more than two starts at the track. … Six-time winner Christopher Bell is averaging a 4.0 finish in his two starts. He is in a “must win” situation, trailing Hemric by 34 points. … Bell has the most Playoff wins among the Playoff drivers – he won at Richmond, Va. and Dover, Del. …. The season’s two winningest drivers – five-time winner Allgaier and six-time winner Bell – both sit outside the top-four heading into the weekend’s title-setting race. … Four drivers are averaging a finish of 10th or better at ISM Raceway – Bell (4.0), Hemric (6.0), Allgaier (7.8) and Tifft (10.0). … Allgaier has the best driving rating (103.8) at Phoenix among drivers with at least three starts. He has led the most laps at the track (180) of any driver in the field this weekend. Sadler is next with 29 laps out front. …. Allgaier (2017) and Sadler (2012) are the only previous winners in this week’s race. … Reddick holds a 42-point advantage over Bell in the Rookie of the Year standings. Austin Cindric is third 69 points back. … Kyle Busch has the most wins (10) in this race. …. Cup driver Brad Keselowski is the most recent Phoenix winner, taking the trophy this March.

NASCAR Camping World Truck Series
Next Race: Lucas Oil 150
The Place: ISM Raceway (Phoenix, Ariz.)
The Date: Friday, Nov. 9
The Time: 8:30 p.m. ET
TV: FS1
Radio: MRN, SiriusXM NASCAR Radio
Distance: 150 miles (150 laps); Stage 1 (Ends on lap 45),
Stage 2 (Ends on lap 90), and Final Stage (Ends on lap 150)
What to Watch For: Justin Haley picked up his second Playoff win last week at Texas and joins veteran Johnny Sauter (Martinsville, Va. winner) with secured championship opportunities at Homestead-Miami Speedway on Nov. 16. … Haley’s win was his 12th consecutive top-10 finish. It vaulted him into Playoff contention and booted Grant Enfinger from fourth to fifth place in the standings – the first position outside the title foursome. This will be only his second Phoenix start. He crashed in his debut and finished 24th. …. Enfinger is now 18 points behind fourth place Noah Gragson. Former champion Matt Crafton is 23 points behind Gragson. He is winless in 17 tries at Phoenix and has crashed out in two of the last three races there. … Sauter’s six victories in 2018 are a personal best. His only win at ISM Raceway was in this race last year. …. This will be championship contender Brett Moffitt’s Phoenix debut.  …. Gragson is still looking for his first top-10 at the track. He was 16th and 15th in two previous starts and has led 55 laps. … Twelve drivers will be making their track debut in Friday’s race. … GMS Racing continues to lead the owner’s championship. It holds a 20-point advantage on Hattori Racing Enterprises. … Kevin Harvick holds the record for wins at Phoenix (four). …. Chevrolet leads manufacturers with 15 victories. …. The closest race at Phoenix was in November, 2002 when Harvick beat Ted Musgrave by .022-seconds. 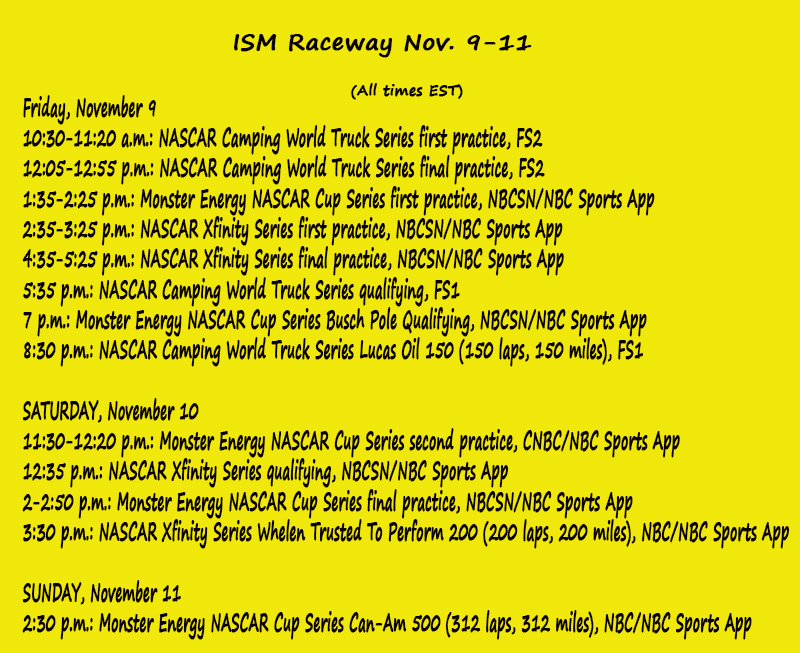