It may not have been the outcome that Hendrick Motorsports has historically come to expect, but considering its recent performance the four-car team has reason to be encouraged by its collective performance last weekend at Texas Motor Speedway.

The result saw Jimmie Johnson place fifth, William Byron sixth and Chase Elliott 13th. For Johnson and Byron, it represented their best finishes of the 2019 Monster Energy NASCAR Cup Series season, while Elliott would’ve likely finished higher had pit strategy not worked against him toward the end. The lone outlier among the Hendrick teammates was Alex Bowman in 18th-place, who started the race in a backup car after crashing in qualifying.

“It’s good and it’s definitely a step in the right direction,” Byron said.

But the indication that Hendrick Motorsports is making progress toward again being the dominant organization in the series customarily goes beyond just the finishing order at Texas. Whether it was practice, qualifying or the race, the Hendrick Motorsports Chevrolets flashed speed all weekend unlike they have all season.

Johnson earned the Busch Pole for the O’Reilly Auto Parts 500 on Friday, then followed by posting the fastest 10-lap average speed in final practice on Saturday, which carried over to Sunday when the seven-time Monster Energy Series champion led a season-best 60 laps. Byron (second) and Elliott (third) also turned in impressive efforts in qualifying, and each backed it up by leading laps in the race.

“For me, I was just trying to get a consistent weekend,” Johnson said. “It is one thing to have one-lap paced, we needed that and we did that on Friday. Then, Saturday went really well. So, in the back of my mind I was thinking we just needed to have a rock-solid day, and if we did that, then I could confirm to myself and to everyone else that we are moving in the right direction.

“We are definitely moving in the right direction. We’ve had a lot of pressure on us, and everyone has stepped up and is getting it done. …

Shining at the 1.5-mile Texas oval was particularly encouraging for the Hendrick camp. Intermediate-sized tracks have been a recent area of weakness for the organization where its Chevrolets have frequently been outpaced by Joe Gibbs Racing’s Toyotas and the Fords of Team Penske and Stewart-Haas Racing.

Although there may not be another intermediate track on the Cup schedule until next month, Johnson believes the momentum coming out of Texas can propel himself and Hendrick Motorsports organization forward. He comes into Bristol Motor Speedway, site of Sunday’s Food City 500 (2 p.m. ET on FS1, PRN and SiriusXM NASCAR Radio), feeling he has a realistic chance of snapping a personnel winless streak that has now stretched to a career-worse 66 races.

Johnson’s confidence heading into Bristol is further buoyed by his recent history at the high-banked, half-mile oval. Of his two-career victories there, one occurred in this race two years ago — his second-to-last Monster Energy Series victory. And last season, even amid a lackluster campaign where he found success fleeting, Johnson still scored top-10 finishes in both Bristol races — his third in the spring was a season-best.

“I feel much better about things,” Johnson said. “Absolutely. This is what we’ve been looking for.”

The optimism expressed by Johnson is shared by his Hendrick teammates that one of them can celebrate in Victory Lane on Sunday. Bowman finished fifth in the Food City 500 last year, followed Chase Elliott joining Johnson in finishing in the top 10 in the August Bristol race. The expectation is that they will be able to replicate those performances on Sunday.

“I can absolutely carry over what we learned at Bristol last year and put that to use this weekend,” Bowman said. “It is a strong racetrack for us. I think Bristol can be a great place for us and I am really looking forward to getting back there this weekend.”

Bristol Motor Speedway is the first of four Dash 4 Cash races for the NASCAR Xfinity Series this season where four eligible drivers will vie for a $100,000 bonus in the Alsco 300 on Saturday (1 p.m. ET on FS1, PRN, and SiriusXM NASCAR Radio).

Christopher Bell of Joe Gibbs Racing, Stewart-Haas Racing’s Chase Briscoe and JR Motorsports teammates Michael Annett and Tyler Reddick are the eligible drivers competing to win the bonus by being the highest finisher among the four this weekend.

“You will more than likely have to win the race to win the bonus, so that is what our focus will be on,” Briscoe said.

The driver who collects the $100,000 on Saturday automatically earns a chance to win another bonus in the next Dash 4 Cash race April 12 at Richmond Raceway. The other three spots will be occupied by the next three highest-finishing Xfinity Series championship-contending drivers in the Alsco 300.

Additional Dash 4 Cash races are April 27 at Talladega Superspeedway and May 4 at Dover International Speedway.

Ryan Preece, a full-time competitor in the Monster Energy Cup Series, is the defending Xfinity Series race-winner at Bristol. Preece is not entered in the Alsco 300.

What to Watch For: Kyle Busch’s seven wins at Bristol are the most among all active, while older brother Kurt Busch’s six wins are second best. … Kyle Busch and Kurt Busch also rank first and second among active drivers in laps led at Bristol. Kyle has led 2,233 laps, while Kurt has led 1,086 laps. … Kyle Busch is defending winner of the Food City 500; Kurt Busch won the night Bristol race last August. … Seven drivers entered in the Food City 500 have previously won at Bristol — Kyle Busch (7), Kurt Busch (6), Brad Keselowski (2), Jimmie Johnson (2), Kevin Harvick (2), Joey Logano (2) and Denny Hamlin (1). … Keselowski is the most recent driver to win consecutive races at Bristol (fall 2011 – spring 2012). … Ricky Stenhouse Jr.’s 11.3 average finish at Bristol is best among active drivers with three or more starts. … Three times in the last 20 years the winner at Bristol has gone on to win that season’s Monster Energy Cup Series championship — Brad Keselowski in 2012, Jimmie Johnson in 2010, and Kurt Busch in 2004. … Elliott Sadler winning from the 38th starting position in 2001 is the farthest back a winner has ever started at Bristol. … Kyle Busch’s 0.064 second margin over Jeff Burton in 2007 is the closest finish in Bristol history. … Cale Yarborough led all 500 laps when he won at Bristol in 1973, the only driver to accomplish this feat. … Fred Lorenzen led just a single lap when he won at Bristol in 1964, the fewest number of laps ever led by a winner. … Chevrolet’s 45 wins is the most all-time by a manufacturer at Bristol. Ford is second best with 37 wins, and Toyota is third with 10 wins. … Ryan Newman is winless in 34-career starts at Bristol, the most starts among active drivers without a win.

What to Watch For: Current Monster Energy Cup Series driver Ryan Preece led 39 laps in last spring’s Bristol race en route to scoring his second-career Xfinity Series victory. … Kyle Busch leads all active Xfinity Series drivers in several major statistical categories at Bristol, including wins (9), top-five finishes (17), top-10 finishes (20) and laps led (2,067). … Busch, who won last week’s Xfinity Series race at Texas, is not entered in the Alsco 300. … None of the Dash 4 Cash eligible drivers, Michael Annett, Christopher Bell, Chase Briscoe or Tyler Reddick, have won an Xfinity race at Bristol. Of the four, Bell has the best result at Bristol finishing runner-up to Kyle Larson last August. … Fulltime NASCAR Gander Outdoors Truck Series competitor Harrison Burton will make his Xfinity Series debut on Saturday, driving the No. 18 Joe Gibbs Racing Toyota. Burton is the son of retired NASCAR driver Jeff Burton, who won at Bristol in both the Xfinity Series (1997) and Monster Energy NASCAR Cup Series (2008). … Bristol is tied with Charlotte Motor Speedway for hosting the most (73) NASCAR Xfinity Series races in series history. … The first Xfinity Series race held at Bristol was on March 13, 1982, and won by Phil Parson. … In total, 474 different Xfinity Series drivers have made a least one start at Bristol. Jeff Green and Kenny Wallace are tied for the series’ most starts at Bristol with 37 each. Green is entered in Saturday’s race, driving the No. 38 RSS Racing Chevrolet. Green’s lone Bristol win occurred in 2005. … Kyle Larson holds the Xfinity Series qualifying record at Bristol, with an average lap speed of 124.686 mph on April 22, 2017. … Erik Jones (April 18, 2015) is the youngest Xfinity Series pole winner at Bristol, at 18 years, 9 months and 19 days. … Harry Gant (August 26, 1994) is the oldest Xfinity Series pole winner at Bristol, at 54 years, 7 months, 16 days. 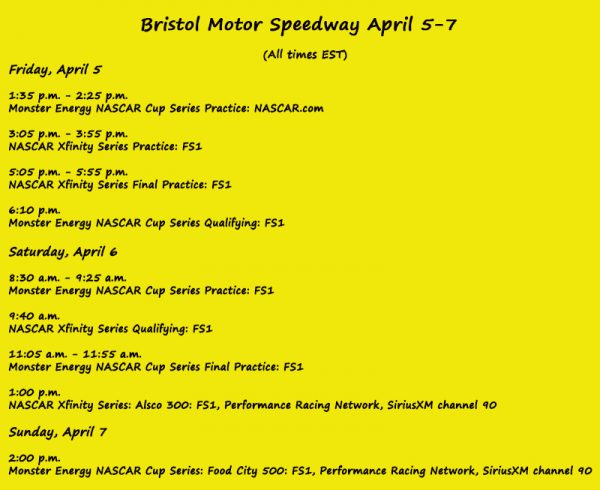