The cars will be fitted with tapered spacers and a series of elements to increase downforce, all with the goal producing tighter racing – especially at 1.5-mile track like Atlanta. The package was successful and popular with both teams and fans when used at last year’s All-Star race at the 1.5-mile Charlotte Motor Speedway.

Teams have been testing the package this preseason and competitors seemed to be enthusiastically looking forward to its debut at Atlanta this week.

“We tested the new package at Las Vegas and [driver] Paul [Menard] and the team were pleased with how it went, but no one really knows what to expect when there are 40 cars on the track,’’ said Wood Brothers Racing team owner Eddie Wood.

It’s been a similar sentiment from last year’s Atlanta winner Kevin Harvick, who left Atlanta and embarked on a three-race winning streak. He won the All-Star race that first used this new package. And he figures it won’t take too long for teams to get a hang of it all – noting it will be real obvious whose got a handle on it early.

“It could happen in the very first race,’’ said Harvick, driver of the No. 4 Ford for Stewart-Haas Racing. “I think as you look at the drastic change that we’ve had in horsepower and downforce and rules and all the different things that are coming into play right there, we could very well go to the first two months of the season and one organization might have an absolutely, distinct advantage and win all the races.

“. …It’s just impossible from a manufacturing standpoint and cutting bodies off and knowing whether your theory’s right or wrong. It’s only answered when we get to the racetrack and every team’s going to have a little bit of a different approach to what they think is right and wrong.”

Harvick’s primary championship rival from 2018 – and fellow eight-race winner Kyle Busch – shared the wait-and-see sentiment, but was also optimistic. He’s a two-time Atlanta winner and making his 500thCup start there this weekend.

“We’re just racecar drivers,’’ Busch said. “We just drive what we’re given to drive and what the rules are. Our team’s got to go to work and build around that – what they know about how to make speed in our cars in order to go out there and beat the rest of the competition. That’s how I look at it.’’

This will be a truer test of the Xfinity Series championship situation with Cup rookie Ryan Preece the only fulltime Cup driver entered in Saturday’s RINNAI 250 (2 p.m. ET, FS1, PRN, SiriusXM NASCAR Radio) – a race won the past six years by a Cup regular.

The entry list this weekend features a robust slate of Xfinity title contenders from Bell to Reddick and Custer. Talented young driver Austin Cindric will campaign a full-year in the Penske Racing No. 22 Ford. And perennial championship contender Justin Allgaier returns as well. Rookie Noah Gragson begins a season of high expectations and is coming off an 11th place finish at Daytona.

The series crowned a first-time winner in Austin Hill and may crown its all-time winner this week. A victory by Kyle Busch would give him 52 career truck series wins, breaking a tie he holds with NASCAR Hall of Famer Ron Hornaday Jr.  Busch boasts the most truck series wins at Atlanta (four), but this race has proven to be anybody’s to win in recent years.

There have been nine different winners in the last nine races. Last year’s eventual series champion Brett Moffitt picked up the first victory of what turned out to be a six-win season holding off rookie Noah Gragson and veteran Johnny Sauter for his second career win.

This weekend’s field is crowded with a mix of former champions such as Moffitt, Johnny Sauter, Matt Crafton and Busch as well as perennial title contenders such as Stewart Friesen and Grant Enfinger along with talented young second-generation NASCAR drivers such as Todd Gilliland and Harrison Burton.

Next Race: Folds of Honor Quiktrip 500

What to Watch For: Kevin Harvick swept the Cup and Xfinity Series races last year at Atlanta, a place where he won an emotional first race in 2001, three weeks after replacing the late Dale Earnhardt at Richard Childress Racing. ….For Harvick’s success at the track (two Cup wins, five Xfinity Series wins), it’s seven-time Cup champ Jimmie Johnson who holds the top driver rating (102.8) compared to Harvick’s 99.4. Johnson leads active drivers with five wins at Atlanta. He also has the most top-five finishes (14) and top-10s (16). He is the only driver in this week’s race to have led over 5,000 laps (5,130). … Kurt Busch is next on the win column. The new Chip Ganassi Racing driver has three wins and his 13 top-10s ties him with Harvick for second best on Sunday’s starting grid. … Chase Elliott has a 7.6 average finish in three Cup races. He has never finished outside the top-10 in NASCAR’s three premier series at Atlanta (3 Cup races, 2 Xfinity races and one truck race). …Ryan Newman leads all drivers in Busch Poles. He’s won seven – including a record streak of six consecutive from 2003-05. Harvick is next on the list with two poles. Newman has the most starts (26) without a win. ….Eight times the Daytona 500 winner has won at Atlanta in the same season. Dale Earnhardt Jr. was the last to do so in 2004. This year’s Daytona 500 winner Denny Hamlin has one win (spring, 2012) at Atlanta. ….Kyle Busch will be making his 500th career Cup start this week. He has two wins (2008, 2013), and seven top-10s in 20 starts. His 2008 victory was Toyota’s first as a manufacturer in the Cup Series. …. Martin Truex Jr. is especially looking forward to the Atlanta 1.5-mile high banks. In the last two seasons, he has eight wins, 18 top-fives and 21 top-10s on 1.5-mile tracks. His best finish at Atlanta is third in 2013. … Only two drivers have scored back-to-back wins at Atlanta in the last 20 years. Jimmie Johnson has done it twice – sweeping the 2007 season, and again 2015-16. Carl Edwards swept the 2005 season races. …Since 2009, car manufacturers have at least doubled up their wins. Dodge won back-to-back in 2009-10. Chevrolet answered in 2010 (Fall) and 2011. Toyota won in 2011 and 2012. Chevy won three straight 2014-16. And Ford has won the last two races.

What to Watch For: Last year’s winner Kevin Harvick began a weekend sweep with his 4.183-second victory over fellow Ford driver Joey Logano. Harvick led 141 of the 163 laps en route to his track-record fifth win in the race. … Harvick will be handling TV duties this year, however, and a full field of talented Xfinity championship drivers is ready to claim the first win by a non-Cup driver since Ricky Stenhouse Jr. in his 2012 Xfinity Series championship year. Harvick (4) and Kyle Busch (2) have won the last six races. … Christopher Bell boasts the top driver rating (123.4) among those entered this weekend, followed by John Hunter Nemechek (116.7) and reigning series champion Tyler Reddick (99.8). … Bell only has one start in this race, but finished third behind Harvick and Logano last year, leading 12 laps – the most other than Harvick. He won the 2017 Gander Outdoors Truck Series race at Atlanta from the pole position. … Perennial Xfinity Series championship contender Justin Allgaier tops the field in green flag passes (356) and leads regulars in laps run in the top-15 (1009) – twice as many as any other driver entered this week. His best finish in the race is fifth (2012). … Michael Annett earned his first win in 230 career series starts last week in the Daytona season opener finishing .116-seconds ahead of JR Motorsports teammate Allgaier. He has one top-10 (10th in 2012) in seven previous starts at Atlanta. …. Cole Custer, the 2018 championship runner-up to Tyler Reddick, finished 14th at Daytona and has one previous top-10 (10th in 2017) at Atlanta. …Highly-touted 20-year old rookie Noah Gragson finished 11th at Daytona. He was runner-up in last year’s Atlanta truck race, his best finish at the track. …Jeffrey Earnhardt earned his first ever front row start (outside pole position) last week at Daytona and finished 15th. His best finish in two starts at Atlanta is 24th (2014).

What to Watch For: Kyle Busch has the opportunity to become the winningest driver in series history. Should he earn the trophy this week it would be his 52nd breaking a tie with Ron Hornaday Jr. … There have been nine different winners in the last nine races. Busch is the last – and only driver – to win consecutive races at Atlanta, doing so in 2007-08. … Eventual truck series champion Brett Moffiitt earned his first win of a six-win 2018 season at Atlanta holding off Noah Gragson on a restart with two laps remaining. Three different drivers – rookie Myatt Snider, former champion Johnny Sauter and Moffitt all led in the final five-laps before the checkered flag. …Austin Hill earned his first career series victory in overtime in the Daytona international Speedway season opener last week. Grant Enfinger – a 2018 playoff driver – finished runner-up and last year’s champion Moffitt was collected in a mid-race accident, finishing 26th. … There are three former race winners in the field this weekend, Moffitt, Busch and two-time series champion Matt Crafton. … Toyota has won three of the last four truck series races at Atlanta. Chevrolet leads all makes with nine wins. Ford has never won a truck race at this track. … Crafton boasts the best driver rating (100.3) at Atlanta among fulltime competitors. He also leads in top-10 finishes (10), fastest laps run (108) and laps run in the top-15 (1,598) – double that of the next fulltime competitor Sauter (661). … Crafton has led the most laps (180) among the fulltime truck series drivers, however Busch has led a record 387. … Ben Rhodes leads all driver with a 7.3 average finishing position in three races at Atlanta.… Christopher Bell earned his first NASCAR national series pole in this race in 2017. 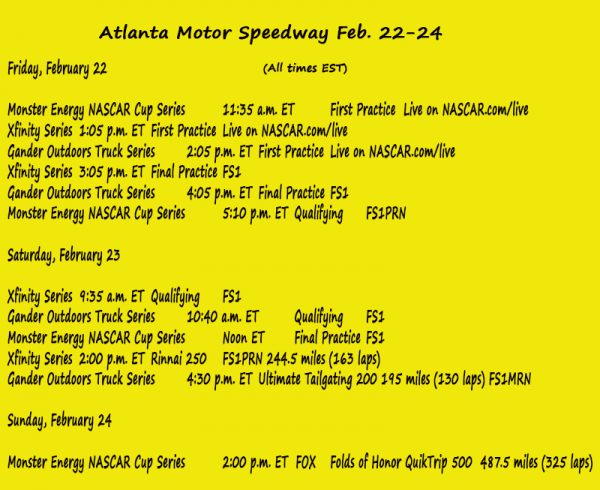