NASCAR announced the next installment of events in its return to racing Thursday. As it seeks to make up races postponed and cancelled due to the COVID-19 pandemic.  NASCAR returned to racing at Darlington on May 17 with two Cup races and a Xfinity race followed by two Cup races a Xfinity race and a Truck race at Charlotte the following week.  This past weekend the Cup series races at Bristol Motor Speedway on Sunday followed by the Xfinity series on Monday.

The majority of the makeup events for June had previously been announced with Atlanta, Homestead-Miami and Talladega coming in the next three weeks.

There was no mention of when, or if, fans will be allowed to return to the tracks, and the series said NASCAR’s modified event procedures and protocols have been finalized in accordance with public health officials, medical experts and local, state and federal officials.

The series said further national series dates will be announced at a later date.

NBC will carry coverage of the NASCAR Xfinity Series and NASCAR Cup Series through the balance of the season, including the Playoffs schedule that is currently scheduled to culminate with the crowning of three NASCAR national series champions at Phoenix Raceway in November. 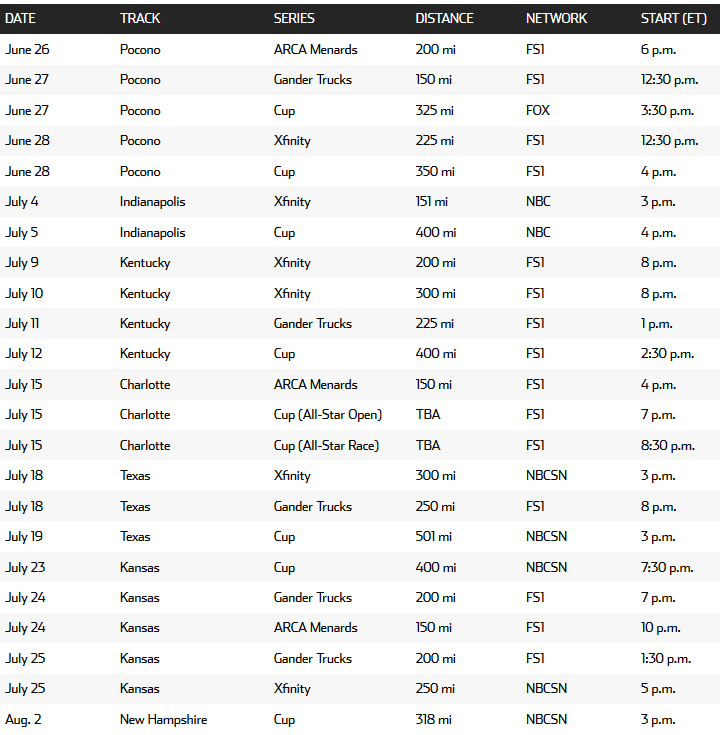