Virtual will become reality next season as NASCAR will race on the streets of Chicago.

Tuesday NASCAR announced an agreement with the City of Chicago to hold a street race in that city beginning next season.

It’s not a new idea, but one NASCAR has floated among industry insiders, teams, and drivers. They went so far as hold a Pro Invitational race on the iRacing platform last year. The race was held on virtual circuit roughly 2.2 miles and connected some of Chicago’s landmark streets, including Michigan Avenue and Lake Shore Drive, lapping the perimeter of Grant Park with the downtown skyline as a backdrop. iRacing laser-scanned the streets and modeled the famous Chicago skyline for as much of a realistic experience as possible. That will be the course that NASCAR will run on for real starting 2023.

There was little doubt that the virtual race was meant to gauge fan reaction to a real race on the streets of Chicago.

Ben Kennedy, NASCAR’s SVP of Racing Development and Strategy was asked about a street race in Chicago earlier this year and seemed to be warm to the idea but didn’t commit. Tuesday, however, it was confirmed. 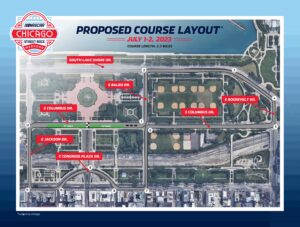 The sport has not been averse to shaking up the schedule with new venues and races. Two years ago, a dirt race at Bristol Motor Speedway and NASCAR held a pre-season exhibition race at L.A. Memorial Coliseum this past January and will do so again to kick of the 2023 season.

“Like the Busch Light Clash at the Coliseum, we seized an incredible opportunity to add an unprecedented element to our schedule and take center stage in the heart of another major metropolitan market,” said Kennedy. “This is the ideal setting for the first-ever NASCAR Cup Series street race. The NASCAR Cup Series Next Gen cars and the IMSA machines will race along the shores of Lake Michigan in downtown Chicago, marking a truly historic moment for our sport. We are very appreciative of Mayor Lori Lightfoot and her team, along with the entire City of Chicago for working with us to make this concept a reality.”

NASCAR raced at Chicagoland Speedway in nearby Joliet Illinois until 2019 when the 1.5-mile oval was removed from the schedule and replaced with Road America. Stock cars raced around a cinder track inside Soldier Field in the 1930s. And the stadium hosted a NASCAR race in July 1956.

Many of NASCAR’s Cup series drivers had their first taste of the Chicago Street course, virtually, when the iRacing Pro Invitational Series held a race there in June 2021. The “Windy City 101” was broadcast on Fox and won by Australian race James Davison.

After that race, most drivers seemed to be on-board with a real-world race on the streets of Chicago.

“Yeah, I think that was talks from last year of them moving forward with that. Obviously didn’t happen this year, but I’m game for whatever,” Bubba Wallace said at the time. “Just watch out.”

Tuesday, Wallace whose race team co-owner Michael Jordan is a Chicago icon following his NBA Hall of Fame days playing for the city’s Chicago Bulls, drove a Toyota around the streets that will be used as the course next year.

“Obviously, the majority owner of our team has done a lot for this city and knowing how much he means to city of Chicago I’m proud to carry that,” Wallace said before his lap behind the wheel.

And he added with a smile, “This [race] has fun written all over it.”

The Chicago Street race will take the place of the Cup series race at Road America. The Chicago deal with the city is for 3 years and will include an IMSA race on a 2.2-mile course that mirrors the 12-turn course mapped out by iRacing. The first race will be on Sunday July 2, 2023. The IMSA race will take place the day prior.

“Chicago’s streets are as iconic as our skyline and our reputation as a world class sports city is indisputable,” said Chicago Mayor Lori E. Lightfoot. “I am thrilled to welcome our partners at NASCAR to Chicago for an event that will attract thousands of people to our city. Chicago’s world class entertainment and hospitality industries, coupled with our city’s history as a conduit for sports talent, make us the perfect hosts for this unique event.”

The rest of the 2023 NASCAR schedules, which will be the 75th Anniversary for NASCAR will be released soon.