Kevin Harvick made the right choices Saturday.  In the first use of NASCAR’s “choose rule” in a points paying race, the Stewart-Haas Racing driver was able to hold off Brad Keselowski and seal the deal on overtime finish to cap off another dominating day at Michigan by winning the first of a weekend doubleheader.

Harvick led a race high 92 of the 161 laps and swept both stages to score his third win in the last four races at Michigan, and his fifth of 2020.

The overtime finish was set up when Austin Dillon and Ryan Newman get together after Christopher Bell made contact with Dillon bringing out the races ninth and final caution on lap 154 of 156.

On the restart Harvick led the field to the green from the outside with Brad Keselowski going from 3rd to 2nd with Chase Elliott lining up behind the Harvick.

Harvick was able to move to the front thanks to a bump from Elliott, as Keselowski survived a three-wide battle to emerge with second as the field came to take the white flag.  Keselowski had one more shot coming out of turn 4 and Harvick won by .284 of a second.

“The restarts were obviously a handful,” Harvick said. “But our Busch Light Apple Ford Mustang was really fast today, and we held on for the long run and would really go on the short run and did everything we needed it to do.”

Keselowski, a Michigan native, was again denied a win at his home track.

“It was a heck-of-a battle,” said Keselowski. “Just not quite strong enough to keep up with Kevin.”

“Kevin [Harvick] is just super-fast on the straightaways and doesn’t give up anything in the corner. We’ve got some work to do.”

Martin Truex Jr. overcame a flat tire early in the race that put him a lap down to finish third. Ryan Blaney and Kyle Busch rounded out the top five.

The start was delayed nearly an hour to avoid overlap with the finish of the NASCAR Xfinity Series race at Road America. The Xfinity event — won by Team Penske’s Austin Cindric — was halted for roughly 90 minutes because of lightning strikes in the vicinity of the Wisconsin road course.

The first two stages were relatively clean with only a competition caution on lap 15 slowing the field.  John Hunter Nemechek would spin on lap 94 and again on lap 107. He would spin one more time on lap 134 before parking for the day. Cole Custer would back hard into the wall between turns 3 and 4 on lap 150 leaving fluid on the track and forcing a red flag of nearly 6 minutes for cleanup.

Harvick’s final pass for the lead during a tight battle with Kyle Busch on Lap 148. Busch was leading when Harvick came under the rear quarter panel of Busch’s Toyota, a move that took the air off the rear of the No. 18 and nearly forced Busch into the outside wall in Turn 4.

“I didn’t know if I hit him or not but I saw the video and didn’t touch him,” Harvick said. “I must have packed a bunch of air on his left rear. I knew I needed to be right there. You have to take the chance when you have it and I needed that side draft down the front straightaway. I got within like an inch it looked like on the video. I didn’t know if I had just barely touched him but in the video I definitely didn’t touch him.”

Busch is now winless through 21 races this season.

“I just didn’t get loose and turn up to the wall by myself, so I don’t know whether he (Kevin Harvick) hit me or just air,” Busch said. “It was close enough that it disturbed my car obviously and made me have to get out of it real bad. It was a race for second today overall.

“We’ve been playing hard all year and this was certainly an improvement. We’ve been close for good finishes and we’ve been running well enough for good finishes, we just aren’t getting them. Today was another indication of that. We should have finished second I guess, maybe won. Top-five it is.”

Saturday’s race featured the first use of the new choose rule that will be used the rest of the season except at superspeedways and road courses. The popular rule for short tracks had been tried at last month’s All-Star Race at Bristol Motor Speedway a non-points exhibition race. The rule allows drivers to choose the lane they will start in prior to a restart.  Denny Hamlin, who finished sixth, along with Elliott, who finished seventh and Keselowski all used it to move from third to the front row on restarts.

“It was good,” Hamlin said. “You can decide what’s best for you. Everyone has a car that works different in different lanes and it definitely gave you an opportunity to move up and make up positions if you needed to.”

“When you start talking about names like Lee Petty and Rusty Wallace and Junior Johnson and all the names that are around us on that list is just an honor to be around them,” Harvick said. “I know that comes with a lot of responsibilities for our sport and I ask myself all the time if I have done enough or am doing enough to help make this sport go forward. It is an honor to be around those names.”

The top 20 finishers in Saturday’s race will be inverted for the second race of the doubleheader. Chris Buescher will start on pole with Clint Bowyer starting second on the front row.

Like Saturday’s race, Sunday’s event is scheduled for 156 laps or 312 miles. 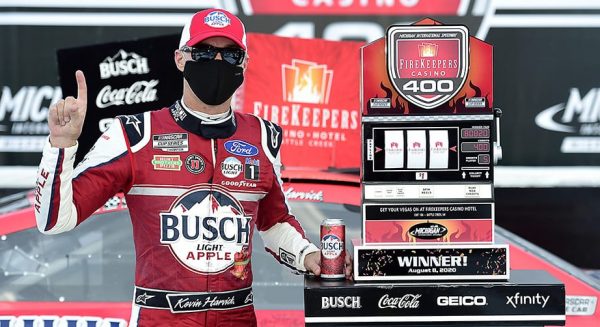