If you wanted drama, you got plenty of it Sunday. Needing nothing short of a win to make the Championship 4 Chase Elliott did just that staging a dominating performance to score his first win at Martinsville Speedway and will contend for the Cup title at Phoenix in one week.

Elliott led a race high 236 of 500 laps and was ahead on the final lap by just over 6 seconds. It was the 10th win of his career, his fourth of 2020 and the first at Martinsville for the Elliott family. His famous father Bill had 45 starts at NASCAR’s shortest track with his best finish of third coming twice.

Elliott took the lead from Martin Truex Jr., who also needed to win his way in, for the final time with 41 laps to go. Truex, who won the last two races at Martinsville, remained close but a loose wheel 25 laps from the end forced him to the pits and ended his title run. Elliott was able to cruise to victory.

Elliott will join Joey Logano who won the opening race of this final round at Kansas, Keselowski and Denny Hamlin who finished 11th and made it in on points to run for the 2020 NASCAR Cup Championship at Phoenix.

“This is the biggest win ever for us,” an emotional Elliott said.  “I’m just so proud to be able to be backed into a corner like that and have to win tonight. I feel like that’s what we’ve been missing these past four or five years and perform when we don’t have a choice. And, to do that tonight; we couldn’t ask for a better night. This is unreal.”

Truex who led the second most laps on the day, 129, had to settle for a 22nd place finish.

“I knew something was wrong,” Truex said about his final pit stop. “I was really, really tight and had a vibration. The 9 (Chase Elliott) car passed us and we started dropping and had to pit for a loose wheel. Unfortunate. I think we should be the one in victory lane right now, but you have to do it all. Just a little mistake there.”

A good car not only helped Elliott, but a bit of luck did as well. During a round of pit stops during a caution on lap 351 Elliott was initially penalized as NASCAR said the jackman had jumped over the wall too soon. Officials reviewed the call before the field took the green and rescinded the penalty ruling that the crew member reestablished position behind the wall in time before Elliott’s car arrived in the pit stall.

Had he been penalized he would have been dropped to outside the top 20; instead, he restarted fifth.

While the drama was playing out among Elliott and Truex, the final cutoff spot for the Championship 4 went down to the final corner of the final lap.

Kevin Harvick, who leads the Cup series with 9 wins and was the regular season champion entered the day feeling relatively safe 42 points above the cutline. He struggled much of the race falling to 24th when a flat left rear tire sent him to the pits under green on lap 181. He came back out 32nd two laps down. He was able to claw his way back to the lead lap, but with Keselowski and Hamlin running higher in the order in the closing laps, Harvick was 1 point below the cutline coming to the checkered flag. He spun Kyle Busch coming to the line, but the move punted Busch’s Toyota across the line to finish ninth, while Harvick limped his Ford to 17th, and will miss the Championship 4 for the first time since 2016.

“It was just a move I had to try knowing that I needed one point,” Harvick said.  “I needed to hit him square in the door, but at that point I was too late and wound up hitting him in the back.  It was just a Hail Mary that didn’t work out.”

“We did just enough,” Hamlin said. “That’s what we needed to do – is do enough to make it to Phoenix and give ourselves a shot at the championship. This FedEx team definitely deserves to be in the top four and glad that we are able to give it a shot next week.”

With his fifth-place run, Kurt Busch is out of the final 4 and Alex Bowman who finished sixth, was also eliminated. Aric Almirola, Clint Bowyer, Kyle Busch and Matt DiBenedetto completed the top 10. 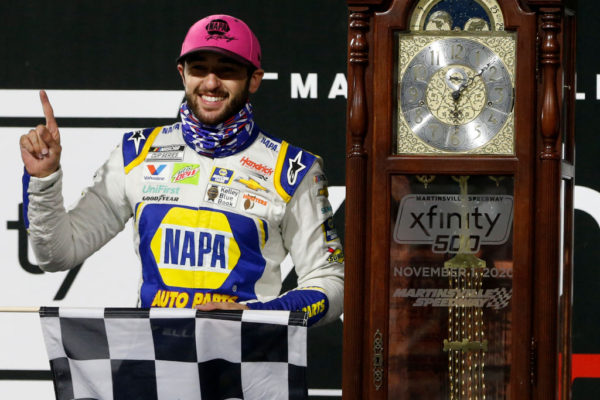