The 21-year old Smith held off his friend, Sunoco rookie Christian Eckes by a mere 0.318-second for the victory and his official berth into the upcoming 2020 series Playoffs. Their duel was made possible after the race’s most dominant driver Grant Enfinger was taken from the lead on the restart in a three-truck collision at the front of the field involving 2019 Michigan race winner Austin Hill and NASCAR Cup Series rookie John Hunter Nemechek.

Grant Enfinger, a two-race winner this season, led a race best 38 of the 107 laps but finished 33rd.

Brett Moffitt, Raphael Lessard, Derek Kraus, Parker Kligerman and World of Outlaws sprint car star David Gravel rounded out the top-10. It was a career-best finish for Lessard as well.

After holding the checkered flag up on the Michigan frontstretch, an emotional Smith climbed out of his No. 21 GMS Racing Chevrolet and spoke about the personal enormity of his victory. His previous best finish in only 11 career series starts was third at Charlotte Motor Speedway earlier this year.

“I really don’t know where to start,” the California-native Smith said. “A lot of people don’t understand my situation with racing. It’s unbelievable I’ve made it to this point. Just thank you.

“A lot of this sport, as we all know, is about money and I don’t come from that. Making it to this point and to win and to be with such an awesome team like GMS Racing is something special,” said an emotional Smith. “I wish everyone could be here so I could celebrate with my parents and my girlfriend. Man, this is a lot to take in and it was awesome racing with all my friends. Man, an unbelievable day.”

The veteran, 2016 series champion Johnny Sauter was chasing Enfinger down during green flag laps late in the race and looked to be making a solid charge from an uncharacteristic points position outside the current Playoff top-10. But Sauter’s No. 13 ThorSport Ford wiggled loose and crashed while running alongside his teammate Enfinger. Prior to that he won Stage 2 of the race – his first stage win of the season – and led a season best 18 laps, but ultimately he finished 16th.

Sauter’s accident was one of a record 11 caution periods. There were 18 lead changes among 13 drivers.

Moffitt, another former series champion, won the opening stage of the race.

The series heads to Daytona International Speedway for a first-ever race on the famed track’s infield road course next Sunday at 12 p.m. ET on FS1, MRN and SiriusXM NASCAR Radio. 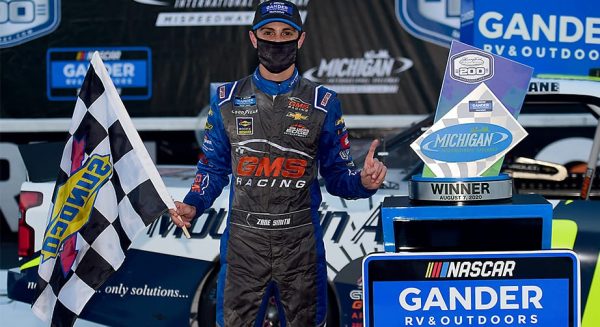