Michael McDowell scored his first career NASCAR Cup series win early Monday morning.  And what a first win it was.  After 357 Cup series starts dating back to 2008, the Phoenix, Arizona native won his first career race on NASCAR’s biggest stage, the Daytona 500.

“I just can’t believe it,” McDowell said. “The only thing I can think of is just God is so good.  For so many years I’ve just been grinding it out trying to stay in this sport.  Bob Jenkins gave me a great opportunity to go full-time in a competitive car and Drew Blickensderfer and my whole entire team we’ve been working so hard for years to get into this position.”

McDowell was part a pack of cars racing on the final lap all fighting for the win. Heading into turn 3, McDowell was sitting third behind Brad Keselowski and leader Joey Logano. McDowell bumped Keselowski who shot up into Logano sending both spinning. The tangle set off a pileup behind that swept up Kyle Busch, Austin Cindric and Bubba Wallace in a fiery crash.  NASCAR threw the yellow, freezing the field with McDowell in the lead and the win.

“My plan was to stick to the 2 car,” McDowell said. “I knew he would go for a race-winning move and my plan was to let him make that move and then coming off of four try to get to his outside or inside.  I knew I didn’t want to make my move too early, so I was committed to the 2 car’s bumper and when he made the move, the hole opened up.  It’s just unbelievable.”

Denny Hamlin, who was the class of the field winning the first two Stages and leading a race high 98 laps was denied his chance at a third consecutive Daytona 500 win and forced to settle for fifth.

The race ended early Monday morning after a five hour forty-five-minute rain delay that started just after a huge crash on lap 14.

Christopher Bell in the No. 20 Joe Gibbs Racing Toyota went to push the No. 10 Stewart-Haas Racing Ford of Aric Almirola while Almirola was running second. The cars were misaligned, and Bell’s bump to the right-rear corner turned Almirola just before the entrance of Turn 3. The No. 10 went up the track into polesitter Alex Bowman’s Chevy and ended with a 16-car pile-up. Bell was able to continue.

Almirola, Bowman, Suarez, Ragan, Newman, Jones and Cope were all listed as out of the race under the ensuing caution which was short lived as lightning from threatening storms struck near the track and the field was put under a red flag. The rain followed shortly after.

Once the rain delay ended, it was clear Hamlin was the class of the field. He was the car to beat until the final round of green flag pit stops which started on lap 170 with first the Fords, then the Chevy camp on the next lap. The three Toyota’s on the led lap were the final group to pit on lap 172. When the three exited the pits led by Hamlin however, they were separated and unable to draft were passed by the line of cars who had already pitted led by Logano.

Two laps later, Bubba Wallace of the three Toyota’s reported a vibration and was forced to pit. He fell a lap down while Hamlin slotted into 13th.  The top 17 cars stayed single file until the final lap, and with no real drafting help Hamlin could only recover to finish fifth.

“It was just like the 125 (Duel race),” Hamlin said. “We came out in front of everybody and didn’t have any help to get up to speed. They all blew by us because they were single file, so it just took away the power that I got and that’s getting through traffic. The fact we came back to fifth there from 12th on the last couple of laps is pretty good. Dominant car.”

Logano would lead 26 laps including the final lap, until turn 3. He was scored 12th.

“Chaos struck,” Logano said. “The 2 kept trying to back up, trying to get a run.  I was trying to back up to him to keep the runs from being too big and just, I guess he got to the back of the 34 and it ended up being a really big run coming at me and it seemed like we all just collided in one spot.  It’s a real bummer that none of the Penske cars won, but at least a Ford won and I’m really happy for McDowell.”

Ryan Preece was sixth, Ross Chastain in his Cup debut was seventh with Jamie McMurray, Corey Lajoie and Kyle Larson rounded out the top 10.

NASCAR returns to Daytona in less than a week with all three top touring series taking to the road course. 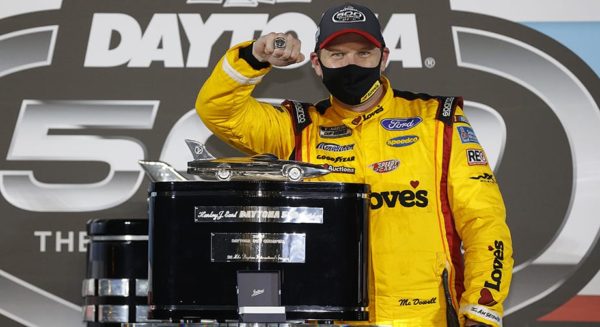