Kurt Busch knew what he was going to do if he caught leader Kyle Busch in the waning laps of the Monster Energy NASCAR Cup Series race last Sunday at Bristol Motor Speedway.

The oldest of the Busch brothers said he would’ve had no issue laying the bumper to his younger sibling and shoving him aside to win the Food City 500. That opportunity never arose, however. As he was pursuing Kyle, Kurt brushed the wall that allowed Kyle enough distance to secure his series-best third victory of the 2019 season.

“He’s already won, I figured he could give a little love to his brother, but no,” Kurt Busch said. “I wanted that one bad.”

Drivers usually don’t often give it a second-thought when it pertains to deciding whether they should execute a classic bump-and-run maneuver that are commonplace on short tracks like Bristol. Rooting a competitor off the preferred racing groove and up the track is how it is done on tracks under a mile in length — especially when a victory is on the line. If that causes hard feelings, well, so be it. They’ll deal with any ramifications later.

The next chance Kurt Busch gets to demonstrate what he’d do if his brother stood between him and a checkered flag comes Saturday night when the Monster Energy NASCAR Cup Series visits another short track, Richmond Raceway (at 7:30 p.m. ET on FOX, MRN and SiriusXM NASCAR Radio).

The three-quarter-mile track has been good to both Kurt and Kyle over the years, and with how well each has performed this season a reasonable chance exists that they may again end up vying for the win. Kurt is a two-time winner at Richmond, while Kyle’s success is even more staggering as he leads all active drivers in wins (six) — including sweeping both races last year.

So what would happen then if Kurt and Kyle were to replicate their Bristol faceoff on Saturday night? Would Kurt really go to the extreme and crash Kyle to win, or was his tough talk merely a way to toy with his brother who got the better of him?

Considering the circumstances it is probably best to take Kurt at his word. Unlike Kyle — a regular visitor to Victory Lane — wins haven’t been in an abundance for Kurt, who has six Cup victories over the past five years, whereas Kyle won eight times alone in 2018 and already has won three of eight races this season.

That desire to win with same frequency as Kyle prompted Kurt to join Chip Ganassi Racing this season, forgoing a ride he had with powerhouse Stewart-Haas Racing for the past five years because he thought CGR represented a better fit. Team owner Chip Ganassi signed Busch because he felt the 2004 Cup champion could evaluate his No. 1 team that had underachieved in recent seasons and raise it to the same level as the CGR’s No. 42 team with driver Kyle Larson.

That challenge Busch readily accepted even if driving for CGR brings with it lofty expectations, as evident by Ganassi not shy about tweeting “I like winners” on social media. But whatever was expected of Busch in his first season, he has proven to be a difference-maker.

Busch already has three top-five and six top-10 finishes, and his 8.6 average finish trails only his brother Kyle (3.4) and Denny Hamlin (5.6). The previous driver of the No. 1 Chevrolet, Jamie McMurray, had just two top five and eight top-10 finishes all of last season underscores that Busch is accomplishing exactly what Ganassi hired him to do.

“It’s been a good start teaming up with Ganassi and everybody that was on the No. 1 car and the results they had from years prior, I would say that we jumped into another category,” Busch said. “And we also know we can go and grab another category, and that is to get those top-fives.”

The only thing missing is what his younger brother has three of this season.

“We know we need to work at our own pace, find our own speed, and make both the Ganassi cars better,” Busch said. “And, we’ll find it. We’ll find our spots to run really well and we’ll find some weak areas that we still need to fix. But, I’m pleasantly surprised and happy with the way the season has started.”

BELL SEEKS TO DOUBLE UP ON DASH 4 CASH

When Christopher Bell took the checkered flag in the NASCAR Xfinity Series race at Bristol Motor Speedway last weekend it signified more than just him winning for the second time this season or accumulating valuable Playoff points. Because Bell was the highest finisher among four eligible drivers as part of the Dash 4 Cash program, he also earned an additional perk in the form of a $100,000 bonus.

“Cardboard checks are my favorite trophies,” Bell said. “I’ve got a couple of them from the dirt races, but none of them say a hundred grand so that’s pretty cool.”

Bell can double up that bonus Friday night at Richmond, with the ToyotaCare 250 the second of four Dash 4 Cash races this season. He will be competing against Tyler Reddick, Cole Custer and Chase Briscoe to win the $100,000 prize, with the best finish among them collecting the six-figure payday.

Reddick and Briscoe were also eligible at Bristol, but neither had anything for Bell over the final stretch that featured a 32-lap green-flag run to the finish. It was Bell’s second win of the season, with Reddick finishing second in the race, Custer third and Briscoe fourth.

Bell would seem to again have the advantage Friday night. Not only is the Joe Gibbs Racing driver the defending race winner, he also won the Playoff race at Richmond last fall. If Bell’s No. 20 Toyota is anywhere close to how strong it was in either race, it could be a long evening for the competition.

“I love going to Richmond,” Bell said. “For whatever reason, it fits our cars and our cars are really, really fast there. … Obviously, winning both the races there gives me a lot of confidence.

“I’m liking the way this Dash 4 Cash deal works. If you run well, you’re able to continue on.”

The winner of the ToyotaCare 250, plus the next three highest-finishing Xfinity Series championship-contending drivers, earn eligibility for the next Dash 4 Cash race at Talladega Superspeedway on April 27.

What to Watch For: Kyle Busch leads all active drivers with six wins at Richmond. Jimmie Johnson, Denny Hamlin and Kevin Harvick are tied for the second-most wins, with three apiece. … In addition to Busch, Johnson, Hamlin and Harvick, six other drivers in the Toyota Owners 400 field have won at Richmond — Clint Bowyer (2), Kurt Busch (2), Joey Logano (2), Brad Keselowski (1), Ryan Newman (1) and Kyle Larson (1). … Kyle Busch is the defending race winner and also won the Playoff race at Richmond last fall. … Bobby Allison is the last driver to win three consecutive races at Richmond (1982-83). David Pearson and Richard Petty are the only other drivers to win three straight races at Richmond. Pearson won three in a row in 1965-66, while Petty won seven straight races from 1970-73. … Busch’s 6.9 average finish leads all active drivers at Richmond, followed by Hamlin at 9.6 and Larson at 9.7. …Hamlin leads all active drivers in laps led at Richmond (1,659). Busch is second-best with 1,183 laps led. … Busch is the lone Monster Energy Series driver to finish in the top 10 in each race this season. He is the first driver to start a season with eight straight top-10 finishes since Terry Labonte in 1992. … Fifty-one different drivers have won a Monster Energy NASCAR Cup Series race at Richmond Raceway. Lee Petty won the first series race at Richmond in 1953. … Kyle Busch’s win last week at Bristol was the 54th of his career, tying Lee Petty for 10th on the all-time wins list. … Richard Petty at 23 years, 9 months, 21 days is the youngest Richmond winner (April 23, 1961). … Harry Gant at 51 years, 7 months, 28 days is the oldest Richmond winner (September 7, 1991). … More drivers have won from the No. 1 starting position at Richmond than any other starting position, doing so 24 times. Denny Hamlin in 2016 was the last driver to win from the pole at Richmond. … Kyle Busch winning from the 32nd starting position last year in this race is the farthest back a winner has ever started at Richmond. … Chevrolet’s 38 wins are the most all-time by a manufacturer at Richmond. Ford has the second-most with 32 wins.

What to Watch For: Christopher Bell won both Xfinity Series races at Richmond last year. He has never finished outside the top 10 in three career Richmond starts. … Bell is the only driver of the four eligible for the $100,000 Dash 4 Cash bonus that has won at Richmond. … Bell’s win at Bristol was his 10th in the Xfinity Series race, coming in his 48th career start. The only four other drivers in series history to record 10 or more wins in their first 48 Xfinity Series starts are Darrell Waltrip (12 wins), Dale Earnhardt (11 wins), Harry Gant (10 wins) and Jack Ingram (10 wins). … Kyle Busch leads all active Xfinity Series drivers in several major statistical categories at Richmond, including wins (6), top-five finishes (16), top-10 finishes (19) and laps led (1,497). … Busch is not entered in the ToyotaCare 250. … Kevin Harvick’s seven Xfinity Series wins at Richmond are the most all-time. … Richmond is tied with Dover International Speedway for hosting the third-most (70) Xfinity Series races in series history. The first Xfinity Series race held at Richmond was on Feb. 20, 1982, and won by Tommy Houston. … … Kyle Busch at 19 years, 0 months, 12 days is the youngest Richmond winner (May 14, 2004). … Harry Gant at 52 years, 1 month, 26 days is the oldest Richmond winner (March 7, 1992). … Veteran Elliott Sadler will return to competition and make his first start of 2019, driving the No. 10 Kaulig Racing Chevrolet. Sadler announced last season he was retiring from fulltime racing. … Sadler is from nearby Emporia, Virginia, and has made 31 series starts on his home state track, posting six top fives, 16 top 10s and an average finish of 12.9. 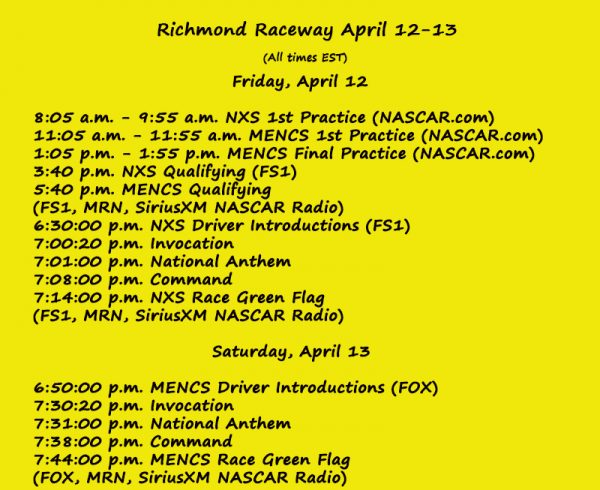