With Only , this week’s Foxwoods Resorts Casino 301 at New Hampshire Motor Speedway (3 p.m. ET on NBCSN, PRN and SiriusXM NASCAR Radio) could prove a pivotal time in the championship stretch.

While the standings did not undergo vast shifts in position following the Kentucky race, gaps among the top-16 Playoff eligible were definitely tightened. Joe Gibbs Racing driver Erik Jones moved into that final 16th place transfer position, but he holds only a perilous two-point edge over 17th place Ryan Newman and is only four points up over 18th place Daniel Suarez heading into the race weekend.

Jones’ advancement from 18th to 16th place in the standings following the Kentucky race and Jimmie Johnson’s fall from 13th to 15th marked the biggest movers among the current championship eligible.

The tight points standings verify vigorous battles at various points both among the safely championship eligible and those on the Playoff cusp.

In particular, the final transfer spots provide some dramatic opportunity. Although Newman, in his first year driving for Roush Fenway Racing, is currently two points out of the Playoff eligibility – the New Hampshire one-mile track is historically one of his best.

Newman is one of six active drivers with three wins at New Hampshire and his seven pole positions there is most all-time. He is the only driver to win from the pole position more than once – earning victories from pole in 2002 and 2011.

He is currently only 10 points behind 14th place Clint Bowyer, who also has a strong history at New Hampshire, scoring his first series win there in 2007. Jimmie Johnson is tied with Bowyer in points, but the tiebreaker ranks him 15th because Bowyer has a best finish of runner-up (Texas) compared to Johnson’s best finish of third (Daytona-2) this season. As with Newman, Johnson has three Cup wins at New Hampshire and is also one of only three drivers (also Matt Kenseth and Kurt Busch) to win consecutive races there, sweeping the 2003 season.

The two veterans – Bowyer and Johnson – hold an eight-point advantage over 16th place Erik Jones, 10 points on Newman in 17th and are only 12 points up on 18th place Suarez.

This season’s dynamic trio of Tyler Reddick, Christopher Bell and Cole Custer added to their stake in dominance last week with Custer picking up his series best fifth victory at Kentucky Speedway. It’s a single season highlight reel for Custer already and still, the 21-year old Stewart-Haas Racing driver trails championship leader Reddick and second place Bell in the driver standings. That’s how good the talented trio have been.

The three drivers have won 12 of the year’s 17 races (a 70.6% winning percentage). And Bell arrives at New Hampshire Motor Speedway as the defending champion of Saturday’s ROXOR 200 (4 p.m. ET on NBCSN, PRN and SiriusXM NASCAR Radio).

The race will be of particular interest to the NASCAR Xfinity Series driver standings. Bell is the only former winner entered, with six-time champ Kyle Busch sitting this year’s New Hampshire race out and only one fulltime Monster Energy Cup driver on the grid (Paul Menard).

Among the current Xfinity Series top five in the driver standings only Bell and Custer can claim a top-10 average at the track. Custer finished ninth in both his previous starts. Reddick, who holds a 67-point edge over Bell and a 75-point advantage over Custer atop the series standings, started ninth and finished 25th last year due to a pit road penalty in his only New Hampshire start.

Austin Cindric, who is ranked fourth in the Xfinity driver standings, is looking for his first victory of the season. He started 15th and finished 17th last year in his first New Hampshire Xfinity race.

Similarly, Justin Allgaier, who is fifth in points and still looking for his first win of the season after a career high five-win 2018, has five top 10s in eight starts at the track. His best showing is sixth-place finish in 2010 and he’s only led two laps total in those eight races.

What to Watch For: Jeff Burton is the all-time winningest driver at New Hampshire with four victories. There are six active drivers with three wins each – Denny Hamlin, Jimmie Johnson, Kevin Harvick, Kyle Busch, Kurt Busch and Ryan Newman. … Ryan Newman has won the most pole positions (7) all-time – more than double that of any other active driver. Brad Keselowski and Kyle Busch have each won three poles.  Keselowski is the only current Cup driver to score his career first pole position at New Hampshire. … Rusty Wallace won the first Cup race at New Hampshire in July, 1993. … Current Cup drivers Joey Logano, Ryan Preece, B.J. McLeod, and Corey LaJoie all made their first Cup starts at the track. … Six times a driver a has won consecutive pole positions. Ryan Newman is the most recent to do so, sweeping the 2011 season races. … Chevrolet has won the most poles (18). … Only three drivers have won back-to-back races – including Jimmie Johnson (2003 season sweep), Kurt Busch (2004 season sweep) and Matt Kenseth (Fall, 2015, Spring, 2016). … Joey Logano is the youngest winner in track history – aged 19 years, one month and nine days when he won in June, 2009. … Five drivers scored their career first Cup win at New Hampshire, including current drivers Joey Logano (June, 2009), Clint Bowyer (September, 2007) and Ryan Newman (September, 2002). …The pole position is the most proficient starting spot in the field, producing six winners. The most recent polesitter to win was Kyle Busch in 2017. … The farthest back on the grid a winner has started is 38th – Jeff Burton in 1999. … Joe Gibbs Racing holds the record for most wins at New Hampshire with 11. … Chevrolet is the winningest manufacturer (19). Among the current makes, Ford has 14 wins and Toyota has nine. …Tony Stewart has the most runner-up finishes all-time (six). Denny Hamlin and Kyle Busch each have four – most among active drivers. … Jeff Gordon holds the all-time mark for top fives (16) and top 10s (24). Kevin Harvick and Kyle Busch lead active drivers with 11 top-five finishes. Jimmie Johnson leads active drivers with 22 top 10s. … The closest Margin of Victory at New Hampshire is .068-second when Denny Hamlin edged Jeff Gordon in July, 2007. …. Jeff Gordon has led the most laps in history at New Hampshire (1,373). Kyle Busch (1,010) leads all active drivers and is third all-time.

What to Watch For: Defending race winner Christopher Bell is the last fulltime Xfinity Series driver to win at New Hampshire since Kyle Busch won the 2009 race and 2009 series title. Martin Truex Jr. won at New Hampshire in 2005 en route to the Xfinity championship, however, unlike Busch in 2009, Truex was not also competing in the Cup Series at that point. …. The only fulltime Cup driver entered this weekend is Paul Menard in the No. 12 Team Penske Ford. … The only driver to win consecutive races at New Hampshire is Kyle Busch, who won three straight from 2009-2011 and back-to-back in 2016-17. … Six of the last seven races have been won from the pole position. Last year Christopher Bell won from the second starting spot. The front row has produced 13 of the 32 race winners. … In all 26 of the 32 Xfinity races at New Hampshire have been won from a top-10 position on the grid, including the last 14 straight. … Among the current manufacturers, Toyota holds a slim lead winning nine races. Both Ford and Chevrolet have eight victories a piece. … Toyota drivers have won five of the last six races and nine of the last 11. … Christopher Bell is the only former winner entered this week. … The farthest on the starting grid a race winner has started is 26th – Buckshot Jones won from there in 1998. … Kyle Busch’s six wins is most all-time at New Hampshire. … The driver who leads the most laps has won six of the last seven races. … Christopher Bell led 93 of the 200 laps in his win last season – the only time in the last seven years the winning driver didn’t lead at least 100 laps. 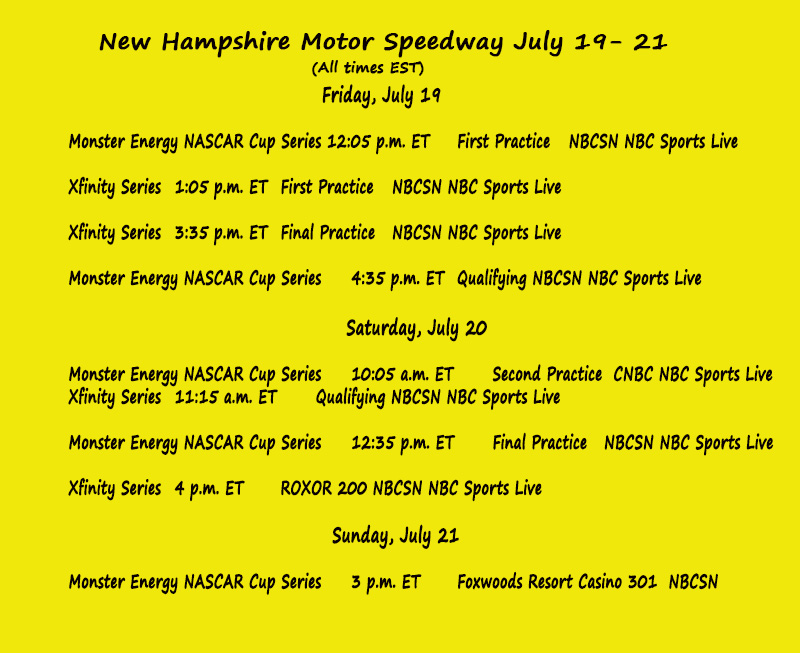