As the all-time winningest driver at the ISM Raceway one-miler in Phoenix, Arizona, Kevin Harvick has proven to be the odds-on pick anytime the Monster Energy NASCAR Cup Series race is in town. His career statistics at the track are historic and poised to become more so.

But Harvick enters Sunday’s TicketGuardian 500 (at 3:30 p.m. ET on FOX, MRN, SiriusXM NASCAR Radio) looking for something equally as important but for remarkably more simple reasons. Last season’s eight-time winner is still winless through three races of 2019. Precedent calls for a victory.

This season he’s earned a pair of top-five finishes in his No. 4 Stewart-Haas Racing Ford Mustang – fourth-place the last two weeks at both Atlanta and Las Vegas. A year ago, however, he showed up in the desert having won those two races and then winning at Phoenix to cap off the first of several trophy strings on the season.

Harvick’s nine wins at ISM Raceway is a total more than double the next best production – fellow Californian Jimmie Johnson’s four. Half of Harvick’s starts – HALF – have resulted in top-five finishes, 16 of them in 32 races. He has 22 top-10 finishes and has led a track best 1,595 laps too.

He’s won seven of the last 13 Phoenix races including, four in a row from November 2013 to March of 2015. The streak snapped in November, 2015 when Harvick finished runner-up.

Not surprisingly, Harvick boasts the top driver rating (111.0) coming into the weekend’s race and his 9.3 average finish is also best in the field. Not surprisingly, he also leads drivers in most laps run among the top-15 (7,216 laps)

A 10th victory on Sunday afternoon would make him one of only six drivers in NASCAR history to win 10 times at a single track. Four of them are already NASCAR Hall of Famers (Richard Petty, David Pearson, Darrell Waltrip and Dale Earnhardt). The other – Johnson – is a seven-time Monster Energy NASCAR Cup Series champion who will be a first-vote Hall of Famer when he retires.

“When we go to Phoenix, we are always going for the win,” Harvick said. “That’s been a great racetrack for me, personally, and since I’ve been at SHR, it’s become statistically one of our best racetracks as far as win counts go.

“It’s definitely a racetrack that we circle every year where we think we should have an opportunity to win.”

Harvick is coming off a pole position at Las Vegas and trails points leader – and defending champion – Joey Logano by only two points heading to Phoenix.

XFINITY HEATS UP OUT WEST

Not only has the racing been dramatic and close this season – the opening three races decided by an average of .166-seconds, the closest margin in 21 years – but for the second straight year, it’s been a varied lineup of trophy hoists. Michael Annett won the season-opener at Daytona, Bell won at Atlanta and Kyle Busch won last week at his Las Vegas home track. Last year it took 14 races for a repeat winner – Allgaier won at Dover, Del. then four races later at Iowa Speedway.

What to Watch For: A victory Sunday would make defending winner Kevin Harvick only the sixth driver in history to score double digit victories (10) at a track. … Jimmie Johnson has the next highest win total of four. … There have seven different winners in the last seven ISM Raceway races. Harvick has won back-to-back races at the track twice before – sweeping the 2006 season and winning four consecutively from Fall, 2013-Spring, 2015. …. The pole winner has won the race five times. Only two active drivers have accomplished the feat – Kevin Harvick in the Spring of 2015 and Johnson in the Fall of 2005. … In eight of the last 10 races, the winner has started 10th or better. … Ricky Rudd came from the farthest back in the starting field (29th in 1995) to win. … Toyota, Chevrolet and Ford each have two wins in the last six races. …. Hendrick Motorsports is the winningest team at Phoenix with 10 victories. Roush-Fenway Racing has eight victories. … Chase Elliott and Kyle Larson lead all active drivers in best average starting position (sixth). … Chevrolet leads all manufacturers with 24 wins. Ford is next with 16. … There are seven former ISM Raceway winners in the field. In addition to Harvick and Johnson, Ryan Newman (2) and Kyle Busch (2) have multiple wins. … Newman’s last career victory came at Phoenix in 2017. He leads all active drivers in starts (31) at the track. … Kyle Busch won in the Fall, 2005 and Fall, 2018 marking the longest span in between victories at ISM Raceway. ….There have been 15 lead changes in three of the last four races, including both in 2018. … Recent NASCAR Hall of Fame inductee, 1992 Cup champion Alan Kulwicki won the very first Phoenix race in 1988.

What to Watch For: Christopher Bell is the last NASCAR Xfinity Series regular to win at ISM Raceway (November, 2018).  ….There have been five different winners in the last five races…. Kyle Busch won three straight times from 2015-16. … Bell holds an 18 point lead over 2018 championship runner-up Cole Custer and 2018 champion Tyler Reddick. ….Brandon Jones, Michael Annett and Justin Allgaier are the only drivers to score top-five finishes in two of the season’s opening three races. … John Hunter Nemechek leads Noah Gragson in the Sunoco Rookie of the Year standings, by 13 points. Both drivers have two top-10s in three races. Nemechek finished runner-up last weekend at Vegas. … Kyle Busch, who won last week’s Xfinity Series race in Las Vegas, along with Bell (2018) and Allgaier (2017) are the only three drivers entered this weekend with previous victories in this race. …. Busch’s 10 wins in the Xfinity Series at Las Vegas is most all-time. He’s won three in-a-row twice – 2013 (sweep)-2014 and 2015-2016 (sweep). … The margin of victory in the three races so far averages out to 0.166-seconds – the closest since 1998. All three races this season have been decided by less than a second. … Bell has led the most laps (149) this season. …. A start in Saturday’s race by 77-year old veteran Morgan Shepherd would give him 1,118 starts in all three NASCAR national series – sixth best in history – breaking a tie with NASCAR Hall of Famer Terry Labonte.  …. Five drivers have completed every lap and finished on the lead lap, including Ryan Sieg, Gragson, Cole Custer, Michael Annett and Ross Chastain. … Joe Gibbs Racing holds the current series record for winning on 16 of the 25 tracks hosting a race. …. Kyle Busch, Chastain and B.J. McLeod are attempting to run both the Xfinity and Monster Energy Series races at Phoenix. 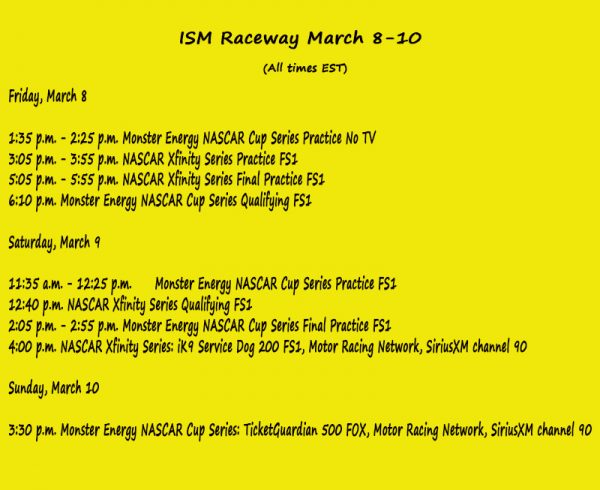