Martin Truex Jr. quickly erased any doubts that he would mightily pursue a defense of his 2017 Monster Energy NASCAR Cup Series trophy when he convincingly won from the Busch Pole position last March at this week’s venue, Auto Club Speedway.

Although Logano ultimately won the 2018 series championship, Truex returns to California for Sunday’s Auto Club 400 (at 3:30 p.m. ET on FOX, MRN and SiriusXM NASCAR Radio) as motivated as ever in his debut season driving for the Joe Gibbs Racing team.

He’s already earned two runner-up finishes through the first four races of the 2019 season and that statement-making performance in California last year is on the minds of Truex and his competitors.

He and his longtime crew chief Cole Pearn – who also moved from Furniture Row Racing to lead the Joe Gibbs Racing’s No. 19 Toyota Camry effort – were optimistic following a preseason Goodyear tire test at the two-mile California track back in January. Two of his teammates – Denny Hamlin in the season-opening Daytona 500 and Kyle Busch at ISM Raceway last week – have victories already and Truex is ready to join the trophy hoisting.

His win at California last year was the first of four victories in a season, where he strongly answered his 2017 title ultimately with a runner-up championship finish.

“Our team is really looking forward to getting to California this week,” Truex said. “It’s one of my favorite tracks and I felt good about the test back in January.

“Obviously, the weather is going to be different and there will be more than three cars like at the test, but we feel like we’ve learned a lot about the package since then. We need to go in there Friday and unload strong and carry that through the weekend.

“I’m excited to see if we can go back-to-back there because it’s really turned into one of the most fun tracks on the circuit.”

Truex has three top 10s – including the two runner-up showings at Atlanta and last week at Phoenix. The only mar on the season a 35th-place finish in the Daytona 500 after his Toyota was collected in a multi-car wreck.

Truex has top-10 finishes in three of the last four races at Auto Club Speedway and led a total of 224 laps in that time. He led a dominating 125 of the 200 laps and won every stage last year. And his 11.6-second margin of victory over former race winner Kyle Larson was among the most dominating efforts of the season.

Auto Club Speedway has traditionally been a mighty test of horsepower and willpower for Xfinity Series regulars, but this season, in particular, there is reason to believe that a 17-year string of Cup winners in the Xfinity race there may be stopped.

Fulltime Xfinity drivers Michael Annett started the year with a victory at Daytona and Christopher Bell answered at Atlanta – the first time a season has opened with back-to-back Xfinity Series regulars winning since 2012 when James Buescher won the Daytona season-opener and Elliott Sadler won the next week at Phoenix.

In particular – and with good timing – a pair of California drivers are leading the way in the series. Defending Xfinity Series champion Tyler Reddick, of Corning, Calif., leads the championship by four-points over Christopher Bell heading into Saturday’s Production Alliance Group 300 (at 5 p.m. ET on FS1, MRN, SiriusXM NASCAR Radio).

Reddick has two top-five and three top-10 finishes in the opening four races and has led the third-most laps (75) this season. A second championship would make him the first to earn back-to-back titles since Ricky Stenhouse Jr. in 2011-12.

Fellow Californian Cole Custer, of Ladera Ranch, finished runner-up to Reddick in the 2018 Xfinity Series Championship and trails his rival by only 11 points heading to their “home” track. As with the Richard Childress Racing driver Reddick, Custer has a pair of top-fives and three top-10s through the opening four races with a best effort of runner-up to in Atlanta.

The Stewart-Haas Racing driver has the second best average finish this season (7.2) and a top-10 (sixth place in 2018) in two previous Xfinity starts at Auto Club Speedway.

The field will undoubtedly face a major challenge from Toyota driver Kyle Busch who begins the first of his two opportunities to score a historic 200th NASCAR national series win in this Saturday race. Busch leads all drivers with six previous wins in the Xfinity race at Auto Club Speedway.

What to Watch For: Martin Truex Jr. is the defending race winner and is one of only four drivers to answer a Cup championship with a win at Auto Club Speedway the next year. Jimmie Johnson is the other active driver to do so in 2007, 08, 09, 2010. … Johnson’s six wins at the track are most all-time and he leads the series in total laps led (980). … The most laps ever led in a race is 228 when Johnson won in 2008. The most laps led by a driver who did not win is 168 laps by Greg Biffle in 2006, who finished 42nd. …. Kurt Busch holds the record for most poles at Auto Club Speedway with four. He and Denny Hamlin (three) are the only active drivers to have won multiple poles. … Kyle Busch is both the youngest pole winner (19 years, 9 months 25 days in February, 2005) at Auto Club Speedway and the youngest race winner (20 years, 4 months, 2 days in September, 2005). … The next race victory for Kyle Busch would be number 200 among NASCAR’s national series. That could come in either in the Xfinity Series race on Saturday or the Monster Energy Series race on Sunday. … The closest margin of victory is 0.144-seconds when Kevin Harvick beat Jimmie Johnson in March, 2011. Johnson leads all drivers with five second-place finishes. … The farthest back a race winner has started is 31st – Matt Kenseth in 2006. …. Four positions on the grid have produced the most winners (three each). They are pole position, third place, ninth place and 24th place. … Only three drivers have won from the pole (Johnson in 2008, Kyle Larson in 2017 and Truex in 2018). … Chevrolet leads all manufacturers with 14 wins. Ford has 11 and Toyota has three. Ford has won only once in the past 11 years (Brad Keselowski, 2015).  … Hendrick Motorsports is the winningest team at the track with 11 victories. … Chris Buescher is the only driver in the field who made his Cup debut at Auto Club Speedway (in 2015). Johnson (2002) and Busch (2005) are the only drivers in the field to have earned their first win at the track. … This weekend, Harvick and Kurt Busch will tie Jeff Gordon for most starts (26) at the track. … Harvick is the winningest NASCAR driver from the state of California with 106 victories in the three national series (46 in Monster Energy, 47 in Xfinity and 14 in the Gander Outdoors Truck Series). … Four of the last five races have gone into OT – the lone exception being Truex’s win last year.

What to Watch For: There have been five different winners in the last five races. … Last year 2018 Cup champion Joey Logano won but there were eight Xfinity Series regulars among the top-10, led by race runner-up Justin Allgaier. … Logano has three victories and is one of six drivers to score multiple wins at the track. Kyle Busch has the most trophies (6) followed by Matt Kenseth (4), Greg Biffle (3), Logano (3) and Kyle Larson (2). … Busch, Logano and Larson have combined to win 11 of the last 13 races. … The last Xfinity fulltime drivers to win at the track were Scott Riggs in 2002 and Hank Parker Jr.  in 2001. … Austin Dillon won in 2016 leading only the last lap – a similar scene to his 2018 Daytona 500 triumph when he led only the checkered flag lap. … A victory for Kyle Busch on Saturday would give him 200 wins in NASCAR’s three major series. He could leave NASCAR’s West Coast swing with 201 wins as he’s swept the Auto Club Speedway races before (2013). … Three times drivers have won back-to-back races at Fontana – Kyle Busch’s three straight (2010-11) is a high mark. Biffle swept the 2004 season races and Kenseth won in 1999-2000 – making him the only driver to win in two centuries. …This facility has seen multiple winning streaks from manufacturers. Chevrolet won four straight races from 1998-2001, Ford won seven straight from 2002-06 and Toyota set a record with nine consecutive Auto Club Speedway victories from 2008-2013. Chevrolet answered that with a string of four wins (2014-2017) snapped by Logano’s win for Ford last year. … John Hunter Nemechek leads the Sunoco Rookie of the Year Standings by 10 points over Noah Gragson and 24 points over Justin Haley. Nemechek is the only one among the five-driver rookie class with a previous Auto Club Speedway start. He finished 29th last year after getting caught in a multi-car accident. 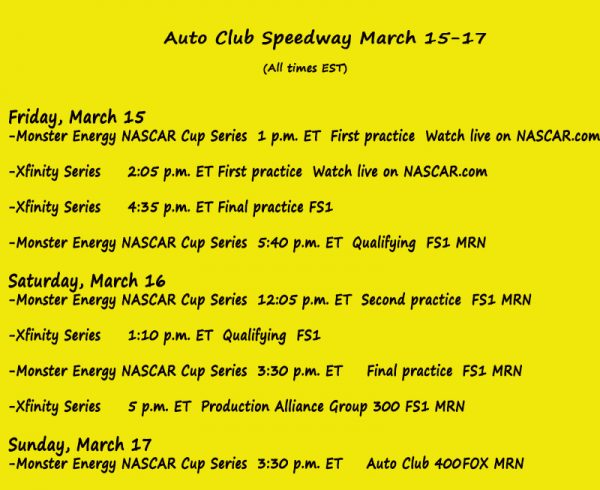