Unlike Saturday’s race where was the dominate car all day, Sunday his domination didn’t start until he took the lead for the first time on lap 48 just after the end of Stage 1.  Harvick would go on to lead a race high 90 of the 156 laps and add another stage win, taking Stage 2 on lap 80.

“It was a big challenge,” Harvick said.  “I could run really good through one and two still, but I was just tight on that other end all day.  So I’ve just got to thank all my guys.  They did a great job all weekend on pit road.  Great pit calls.”

Like Saturday, the race was mainly caution free until the latter stages. The first caution outside of a stage break came on lap 96 shortly after Ryan Blaney had taken the lead after the restart at the end of Stage 2 when the field took the green on lap 92.  His Team Penske teammate Brad Keselowski charged from third and was second on lap 97 after the restart and looking for the lead entering Turn 1. Keselowski shot underneath Blaney exiting Turn 2, hit the yellow line, got loose and spun up into Blaney sending both into the outside wall and ending both driver’s days.

While the leaders pitted, Aric Almirola got the wrong signal from his crew and stayed out to lead.  He would lead until lap 137 when Alex Bowman’s Chevy lost a tire leaving debris on the track and bringing out the yellow.

On the restart Harvick chose the outside while Hamlin taking advantage of NASCAR’s new choose rule elected the bottom lane and lined up beside Harvick on the front row.

Harvick would take the lead, while Hamlin battled with Martin Truex Jr. eventually taking the second spot and setting his sites on Harvick.

With two laps to go Hamlin was on Harvick’s rear bumper and Harvick seemed to stumble out of Turn 2 but Hamlin slowed as well, and Harvick was able to keep the lead and wine over Hamlin by .093 of a second.

“Our car wasn’t quite as good as it was yesterday,” Harvick said.  “I think it was obviously still really good, but I had a little bit more trouble going through traffic today than I did yesterday just because of the tight into three that I had today.

“Like I said earlier, I could still get through one and two really good, but I couldn’t make those great low passes like I could yesterday and stay in the throttle.  If I carried too much speed in there I would push up into the center of the corner and just have to pedal the thing on exit.”

Hamlin had to settle for the runner up spot.

“Once we finally got to second, I knew we had something for him (Kevin Harvick),” Hamlin said. “I just got stalled there and he was tight, I was tight. We were better, that’s for sure. I thought if I could maybe get to his quarter panel, I could shove him higher and make him tighter, but just couldn’t quite do it. We obviously had a very strong run. Just needed a little bit more.”

Truex finished third, the same spot he finished on Saturday; Kyle Busch was fourth, followed by Joey Logano in fifth.

Despite having to pit, Almirola rallied to finish sixth. Matt DiBenedetto seventh, Austin Dillon, who was forced to do a pass-through penalty before the first green flag for adjustments done on pit road prior to the start was eight with Chase Elliott and Kurt Busch rounded out the top 10.

“It’s been a long time since I’ve raced back-to-back days let alone in the Cup car,” Harvick said.  “I’ve never accomplished that obviously, but we’ve done that a couple times this year, so I think for us it’s worked out pretty well.  We’re hoping it goes the same way at Dover when we go there in a couple of weeks.”

Harvick now leads all active drivers in 2020 with six wins, all coming since NASCAR restarted its season at Darlington in May.

The series now heads to Daytona International Speedway for the first ever Cup race on the 3.61-mile road course next Sunday. 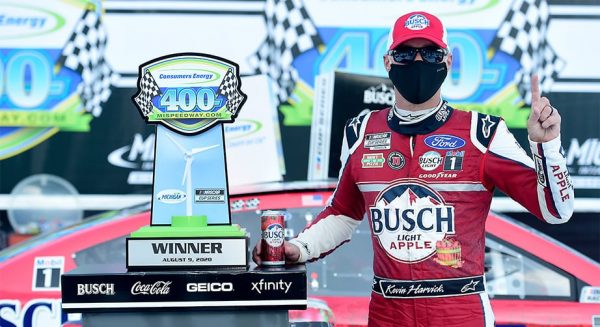