Byron avoided two huge crashes in the closing laps, and two red flag periods, to beat his Hendrick teammate Chase Elliott in overtime by a .119-second margin of victory. Most importantly he clinched his spot in NASCAR’s Playoffs becoming only the second driver in the history of NASCAR’s Chase format to win the final regular season race and clinch a playoff berth.

The winning move for Byron came when he pitted from third place during a caution for a single car incident on lap 143, the first caution outside of a competition caution on lap 20 and two stage breaks.  With fresher tires then those ahead Byron was able to charge back through the field and eventually take the win.

“I had confidence in (crew chief) Chad (Knaus) and the guys that we could get four tires and make the most of it,” Byron said. “So, I’m just extremely blessed, and this is incredible. It’s been a hard couple of years in the Cup Series and trying to get my first win and gel with this team. These guys did an awesome job today and got us in the Playoffs and it’s amazing.”

Denny Hamlin was third with Martin Truex Jr. and Bubba Wallace finishing out the top-five spots.

With 13 Playoff spots already clinched on points when the night started Byron was just above the cutline in points over Matt DiBenedetto and Jimmie Johnson.

Clint Bowyer, who entered the race secure in 14th, made it official after Stage 1. That left two spots remaining for Byron, DiBenedetto and Johnson.

Much of the race ran uneventfully. Joey Logano swept the first two stages and led a race high 36 of the 164 laps run.

Kyle Busch would take the lead late in the going and seemed to have a good shot at his first win this season. On lap 153, 8 to go in regulation, however, the mainly uneventful race turned very eventful.

Tyler Reddick, needing nothing short of a win to make the Playoffs, got a push on the inside and shot ahead of Busch.  Reddick however, tried to move up and block and Busch clipped Reddick’s bumper, sending him into the outside wall and collecting Austin Dillon, Ryan Newman, Ricky Stenhouse Jr. and several others.

“Just a slide job gone bad,” a frustrated Busch said. “(Tyler) Reddick threw it off into three and might have been clear, but wasn’t clear by much and started coming up the track and was losing momentum. I even had to check-up because I saw him coming and it wasn’t enough check-up and wrecked the field. I hate it for all my Interstate Batteries guys. They’ve worked so hard this year and done a great job. We put ourselves in a great spot again tonight and had a fast race car, a good driving race car and was just hoping we could maintain that position for the rest of the day and get a win, that’s what we’re trying to look for. Thought we had a shot to do that. Still 2020.”

With few laps remaining, NASCAR threw the red flag stopping the field for just over 10 minutes for clean-up.

On the restart with two laps left, Joey Logano saw his hopes for a win come to an end while racing three wide for the lead. The 11-car crash included Reddick, Bubba Wallace, Matt Kenseth and Johnson.  Johnson was able to drive his No. 48 Chevrolet back to pit road, but the damage was severe enough that he had no chance of making up much ground. He finished 17th and will not compete for an eighth NASCAR Cup title in his final year as a fulltime Cup driver.

“First and foremost, congratulations to my teammate for getting his first Cup win like that,” Johnson said. “This setting and the drama that goes into it, that’s a big win for [crew chief] Chad Knaus and William Byron, really happy for those guys.

“I really feel like we had a way to transfer to win or point our way in the way it went the first two stages and things just got ugly in Turn 1. Unfortunate, but that’s plate racing.

“We had a really good car and last couple months we’ve been really getting our act together and running well. Really disappointed to not be in the Playoffs. That was the number one goal to start the year.”

There was no further drama in the front as Byron was able to win his first race in his 98th start and become just the second Hendrick driver to in in the No. 24 Chevy behind Jeff Gordon.

“This is probably the hardest track to points-race,” Byron said. “We had a great Stage 2 and kind of got back in the pack and got shuffled when everyone went single file. I thought my hopes were up there. And we were racing around the No. 21 (Matt DiBenedetto) and the No. 48 (Johnson) in the final stage and I was like man, I’ve got to really make something happen. Luckily, I was able to push the No. 43 (Bubba Wallace) and he and the No. 22 (Joey Logano) made some contact and opened up a hole for me, and I wasn’t going to lift. It was awesome.”

“We made it,” DiBenedetto said. “I don’t care how we did it. All my goal was, was to come in here and make it. I wanted it so bad for this team.”

The first race in the NASCAR Cup Series’ Playoffs, the Round of 16, will be the Cook Out Southern 500 at Darlington Raceway next Sunday evening. 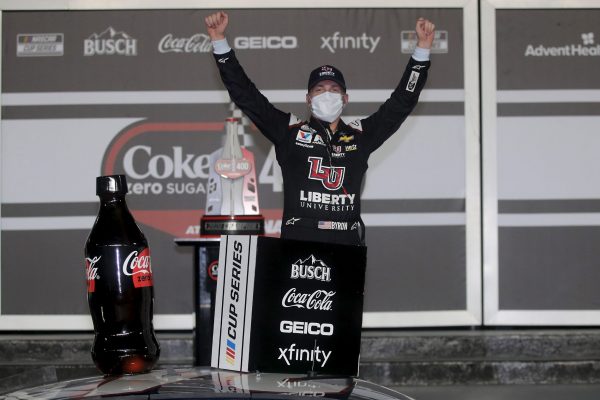