This weekend’s NASCAR races at Atlanta Motor Speedway will be the last on the 24-year-old surface.

The track announced Tuesday that following this weekend’s events, the track will not only get a repave, but there will be a reprofile that will increase the current 24-degree banking in Atlanta’s turns to 28 degrees. In addition, the racing surface will become narrower with an overall decrease in width from 55 feet to 40 feet. New widths will be 52 feet on the front stretch, 42 feet on the back stretch and 40 feet in the turns.

“As Atlanta’s racing surface has aged, we’ve challenged ourselves to reimagine what NASCAR racing at an intermediate track can be,” said Speedway Motorsports President and CEO Marcus Smith. “With high banks in the turns, narrower width and new pavement technology, Atlanta will be unlike any other mile-and-a-half track on the circuit. It’s all new for ’22 and this will be specifically designed for close, competitive racing.”

The new configuration and pavement will debut in 2022 in conjunction with NASCAR’s Next Gen car.

“Our partners at Speedway Motorsports have reprofiled Atlanta Motor Speedway to optimize the racing with the Next Gen car, and early simulations suggest the racing will be closer and even more competitive,” said Steve O’Donnell, NASCAR Executive Vice President and Chief Racing Development Officer. “From the Charlotte ROVAL to the Bristol Dirt Race and now a re-imagined Atlanta, Marcus Smith and his team continue to take bold, innovative steps to bring unique and exciting racing experiences to our fans.”

In the announcement the track said that during a 10-month development process, Speedway Motorsports partnered with iRacing to test and verify concepts for the future Atlanta Motor Speedway. This not only provided a virtual rendering of each concept, but also provided key data on how NASCAR’s Next Gen car will perform on the reconfigured 1.54-mile oval.

Ryan Blaney won the spring race at Atlanta in March.

“I hope it doesn’t happen any time soon,” Blaney said about a repave after his win. “I think you talk to anybody, they really like this place the way it is.”

“You’re going slower, so it’s a little more forgiving just because of the raciness of the racetrack,” Hendrick driver Alex Bowman said of the surface. “You have some huge corrections and still catch the race car.

“That’s probably why it gets as strung out as it does. There’s really no mechanical grip once the tires are worn out. That’s another reason I feel it gets strung out. … [But] I hope they never repave this place.”

“I would keep this surface as long as we can until it starts coming up,” Gordon said. “When you get to that, it becomes a safety issue, then you have to address it.

“But until you get to that point, I’d love to race a Next Gen car here on this surface.” 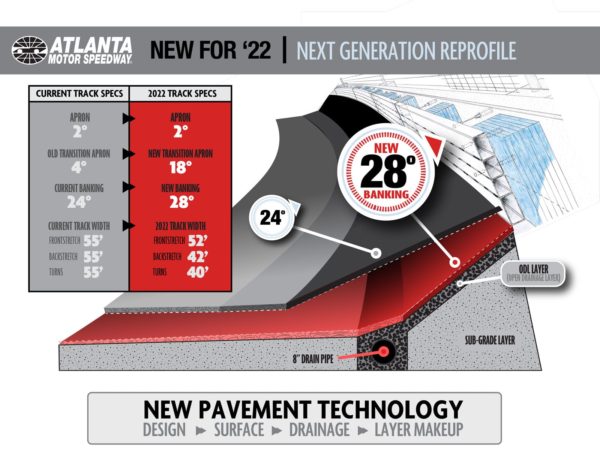