The NASCAR Cup series now has two first time winners in the first two races of the season. A week after Michael McDowell won his first Cup race by taking the season opening Daytona 500 on the famed oval, Christopher Bell won his first career Cup race on Daytona’s road course.

In just his second start for Joe Gibbs Racing, Bell took the lead from Joey Logano coming to the white flag and held Logano off to win by 2.119 of a second.  Logano had the lead on a restart with 8 laps to go but Bell with 6 lap fresher tires was able to hunt him down taking the lead in the front stretch chicane.

“I don’t know, this is definitely one of the highlights of my life so far,” Bell said. “It feels like I’ve prepared my whole life for this moment to race in the Cup Series. Last year was a huge learning curve for me, and I’m very grateful that I got the opportunity to run in Cup. It definitely prepared me to move for Joe Gibbs Racing.”

In all, Bell made up 3 seconds in the final laps to get to the top spot.

“I just kept doing what I was doing all day long,” he said. “Whenever we took the green flag, I felt like I was really patient. Kyle (Busch) tried to go three-wide around me at the start. I knew that I was okay. Adam (Stevens, crew chief) kept asking what I needed in the car and I didn’t really need anything. Just took my time to get going, get up to speed.”

Logano knew that in the end it was fresher tires that won the day.

“He’s the one that got through with tires,” Logano said. “One more caution lap would have been enough to have a door-to-door finish across the line maybe.”

“We were third-best to be honest with you,” Hamlin said. “The 20 (Christopher Bell) was fast there the second half of the race. Maybe I was fourth-best. I thought we were solid. Was trying to hold onto third or fourth fastest and that’s all I’ve got. I just have to get a little bit better. I have to keep getting better to put ourselves in position to win more.”

Chase Elliott who won the last four road consecutive road course races including the Cup series first visit to the Daytona road course last August, was the class of the field for much of the race leading a race high 44 of the 70 laps. He won Stage 1 on lap 16 after leading all but one lap from pole. He fought back late, but with 6 laps to go, Elliott misjudged a move while going for third place exiting turn 6 and spun. He was scored 21st.

“Man, we had those late race cautions like that and a mixed bag of who stays and who goes,” said Elliott. “It’s a bit of a gamble either way I felt like. I think [pitting for] tires was the right move. Tires won the race. So it was the right move. You get back in traffic and gets to be so chaotic.

Daytona 500 winner McDowell ran into trouble early with his Ford sustaining damage on the first lap. He was able to recover finishing eighth behind Kevin Harvick and AJ Allmendinger.

“That was way too much excitement for me,” McDowell said. “had a flat tire there coming to the green.  I knew something was wrong. I should have just pitted, so I screwed that up and that hurt us a little bit.  We lost track position and then missed the chicane.

“Pretty much everything that could go wrong went wrong today, but this is what our team is all about — Front Row Motorsports — we grind it out and we fought hard.  We just kept the fight in it and ended up with another top 10, so pretty crazy how that all went down.  It was another great run.”

Ryan Preece and Alex Bowman rounded out the top 10.

This is just the third instance of a season opening with back-to-back first-time winners, and first in the modern era. The first two times were 1949 and 1950.

NASCAR stays in Florida for another week, heading south where the Cup series will race the Dixie Vodka 400 at Homestead-Miami Speedway next Sunday. 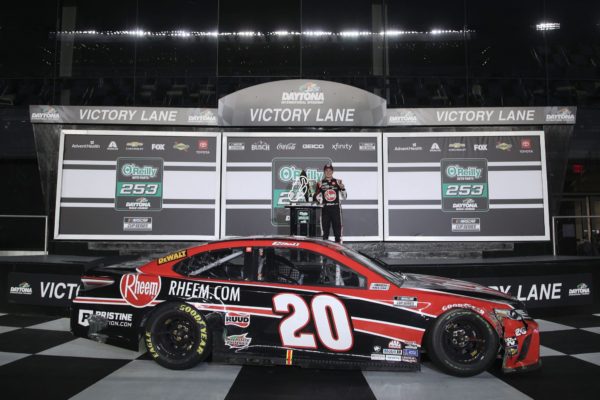