It took a little longer thanks to COVID, but NASCAR finally debuted its Next Gen cars to the world Wednesday at The Park Expo in Charlotte, North Carolina. The three OEMs showed off the models that will hit the track in anger starting with the 2022 Daytona 500.

What began as the “Gen-7” car in 2018 the model started out life on design boards with designers for Ford, Toyota, and Chevrolet and morphed into the Next Gen car which up until Wednesday had only been seen in testing with camouflaged or generic wrap designs.

Chevy will race the Camaro ZL1, Ford the Mustang, and Toyota the TRD Camry. All three cars are closer to mirroring their street counterpart than ever before. And that was exactly NASCAR’s intention.

“I think that at the highest level, one of the main goals is just that the sport remains healthy and strong, that it remains attractive to our current OEMs, teams and fans, but also attracts new ones,” said John Probst, NASCAR’s senior vice president of racing innovation. “As we kind of dive into that, it’s sort of your overarching goal. Then we know to be attractive to our OEMs, we need to be relevant to them.”

The new cars have bigger wheels, and more muscular coupe-style look, but also have an eye towards the future with the potential for hybrid power. On the competition side the new car designs will have more symmetrical car with features that decrease the dependence on aerodynamics and increase the emphasis on car setup in the hands of teams and drivers.

The new cars feature flange-fit bodies and that has reduced some of the negatives of full-contact racing in the Xfinity Series, a trait that’s expected to carry over with even stronger material for the Cup Series’ new model next season.

“When you look at the aspects of the car, particularly around the aerodynamics, reducing some of the downforce that’s out there, the cars will be harder to drive in the corners,” NASCAR chief racing development officer, Steve O’Donnell said. “The composite bodies; NASCAR is all about beating and banging on the racetrack. Less chance for that cut tire that you see under our current design. 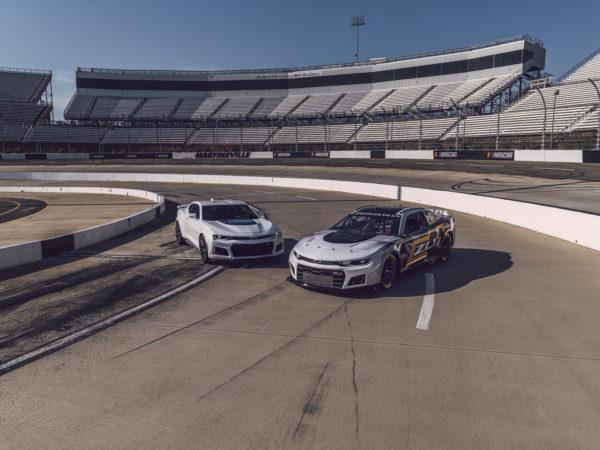 “We’re really looking forward to our drivers going out there and showcasing their abilities. They’re the best in the world at doing what we do. We believe the car that our engineering team and the entire industry has put together is going to enable us to do that.

“Then you add the Goodyear tire, softer tire compounds, the look and the feel, a lot of race strategy and different options will play out at the racetrack. “

The timeline was delayed when the COVID-10 pandemic shut down the world and NASCAR.

“As hard as it was to make a decision to delay it a year because right now this car should be on — initially it was going to be on the racetrack at the Daytona 500 in 2021, but it was the right thing to do,” NASCAR president Steve Phelps said. “Obviously we couldn’t get parts. We didn’t know when we were going to be able to test, and so the timeline initially.

“Do I think we would have made it without COVID? I think the answer is yes. Has the extra time and development been helpful for us? I think so.

“So this has been a long time coming, but I think we needed to get this right. The cars obviously look fantastic, and the ability for us to create the testing time necessary, obviously to make sure we get the parts and pieces, get these cars developed, get them on the racetrack, get the deliveries to the teams obviously is very important for us to get right.”

Some highlights from the Next Gen car include:

Perhaps most importantly n going back to its roots the old adage of “win on Sunday, sell on Monday,” seems relevant again.

“When I look at this race car, it looks exactly like the race car that I can potentially buy on Monday,” Phelps said.”Obviously the win on Sunday portion is important, so getting in Victory Lane for these guys is important for Chevy, Toyota and Ford, but I think absolutely getting back to our roots, getting back to kind of putting the stock back in stock car will help sell vehicles on Monday. That’s certainly what our expectation is. I’m sure it’s the expectation of our OEM partners, as well.”