NASCAR released a photo Thursday of the noose found in the garage stall occupied by the No. 43 team at Talladega over the weekend.

The discovery of the noose set off an investigation that involved the FBI and ended up determining that the noose had been there in the garage since at least last year.  The Wood Brothers Racing team released a statement after the investigation saying one of their employees had alerted them Monday that he recalled seeing a tied handle in the garage pull-down rope last fall.  The Wood Brothers occupied the same garage last fall as the Wallace team was assigned the past weekend.

The FBI determined the noose had been there since at least 2019.

The incident resulted in an unprecedented day of unity across the sport.  Prior to the start of Monday’s race, every driver in attendance along with Wallace’s boss Richard Petty who flew in Monday morning just to support his driver, pushed the No. 43 car to the front of pit road.  All gathered there during the invocation and the singing of the National Anthem.  The movement carried over from social media where the hashtag #IStandWithBubba began to trend.  The track painted the hashtag on the infield grass prior to the race. Drivers had been motivated to stand with Wallace thanks to Kevin Harvick who started a group text among the drivers.

As he had done several days over the past week, NASCAR president Steve Phelps held a teleconference with the media shortly after the photo was released.

“Upon learning of and seeing the noose, our initial reaction was to protect our driver. We’re living in a highly charged and emotional time. What we saw was a symbol of hate and was only present in one area of the garage and that was of the 43 car of Bubba Wallace,” Phelps said. “In hindsight, I should have used the word ‘alleged’ in our statement.

“As you can see from the photo, the noose was real, as was our concern for Bubba. With similar emotion, others across our industry and our media stood up to defend the NASCAR family. Our NASCAR family. Because they are part of the NASCAR family, too. We are proud to see so many stand up for what’s right.”

NASCAR officials asked each track to walk their respective garages following Sunday’s discovery. Across the 1,684 garage stalls at 29 tracks, NASCAR found only 11 total that had a pull-down rope tied in a knot and only one noose — the one discovered Sunday in the No. 43 garage stall.

“Bubba Wallace and the 43 team had nothing to do with this,” Phelps said. “Bubba Wallace has done nothing but represent this sport with courage, class and dignity.”

“Our ultimate conclusion for this investigation is to make sure this never happens again, that no one walks by a noose without recognizing the potential damage it can do,” Phelps said. “Moving forward, we’ll be conducting thorough sweeps of the garage area to ensure nothing like this happens again, and we’re installing additional cameras in all of our garages.

“We’ll make any changes necessary to our sanctions and our code of conduct, and we will mandate that all members of our community complete sensitivity and unconscious bias training, with specifics and bias forthcoming. Going forward, our efforts are best spent on making sure every competitor feels safe, and every guest feels welcome.”

Phelps emphasized, however, that the results of the investigation should not diminish the heartfelt show of support Wallace received from his fellow competitors and their crew members, who—believing he had been targeted and threatened—escorted him to the head of the grid before Monday’s rain-delayed GEICO 500 and stood in solidarity with him.

“NASCAR showed its true colors on Monday—our drivers, our crews, anyone at the racetrack, but more importantly, all the fans that watched it on TV,” Phelps said. “I watched it on television, and I’m not embarrassed to say, I cried. ” 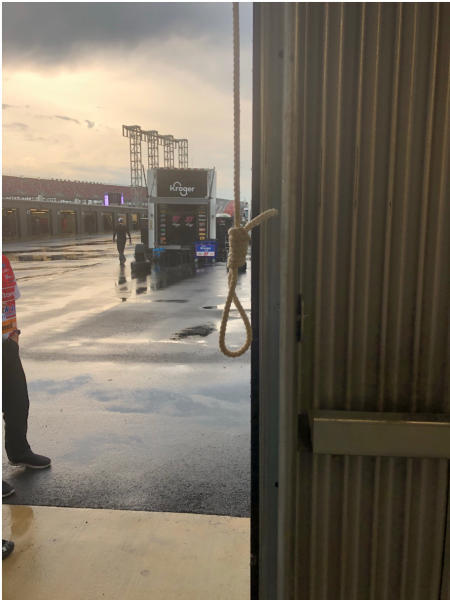