NASCAR made the formal announcement of its return to racing Thursday.  The announcement came a few days after the proposed schedule was sent to teams. That first schedule only showed Cup races, the one released Thursday includes Xfinity and Truck series races as well.

As was previously learned, the first race will be on Sunday, May 17, at Darlington Raceway. That will be the first of seven races over an 11-day span at two different racetracks throughout May.

With the exception of the Coca-Cola 600 there will be no qualifying or practice sessions with each race being a one-day show.

The first race will be run without fans and will be NASCAR’s first on-track action in more than two months as the sport and world in general have been on pause during the COVID-19 pandemic.

The May 17 race is a 400-miler, scheduled for 3:30 p.m. ET, live on FOX, MRN and SiriusXM NASCAR Radio. It also is the first of three races at the track, including a second Cup Series race held midweek under the lights three days later.

The May schedule also includes the Coca-Cola 600 in its traditional Memorial Day Weekend home for the 60th consecutive season, plus midweek races in prime time.

“NASCAR and its teams are eager and excited to return to racing and have great respect for the responsibility that comes with a return to competition,” said Steve O’Donnell, NASCAR executive vice president and chief racing development officer. “NASCAR will return in an environment that will ensure the safety of our competitors, officials and all those in the local community. We thank local, state and federal officials and medical experts, as well as everyone in the industry, for the unprecedented support in our return to racing, and we look forward to joining our passionate fans in watching cars return to the track.”

NASCAR officials have collaborated with public health officials, medical experts and local, state and federal officials to create a comprehensive plan to ensure the health and safety of competitors and surrounding communities at the above events. All races will be strictly tailored, in every way, to follow specific guidelines set by the Centers for Disease Control and Prevention.

Event procedures will be significantly modified in accordance with CDC, OSHA and state and local government recommendations — including hosting one-day shows at the above tracks, which are all within driving distance of North Carolina race shops to minimize travel and time spent in a community.

Other adjustments include mandating the use of protective equipment, health screenings for all individuals before entering the facility and maintaining social distancing protocols throughout the event.

Officials said the May 17 race — and then the May 20 Cup Series race at Darlington — will not replace the scheduled Southern 500 on Labor Day Weekend, the opener of the NASCAR Playoffs. NASCAR intends to keep its 10-race postseason format and tracks involved unchanged, but the situation remains fluid.

No dates beyond May 27 have been announced, but NASCAR officials have said on multiple occasions that the sanctioning body intends to run a full 36-race NASCAR Cup Series slate in 2020.

In a press release that additional schedule updates specific to tracks that have had races postponed, and are not part of this new May schedule, will be revealed at a later date.

NASCAR has been shuttered, as has most of the world, due to the COVID-19 pandemic. NASCAR started postponing races on March 13 starting with Atlanta.  They had run four of the races on a 36-race schedule to that point and have committed to running an entire schedule.  NASCAR postponed a total of eight races including at Atlanta and Homestead-Miami. 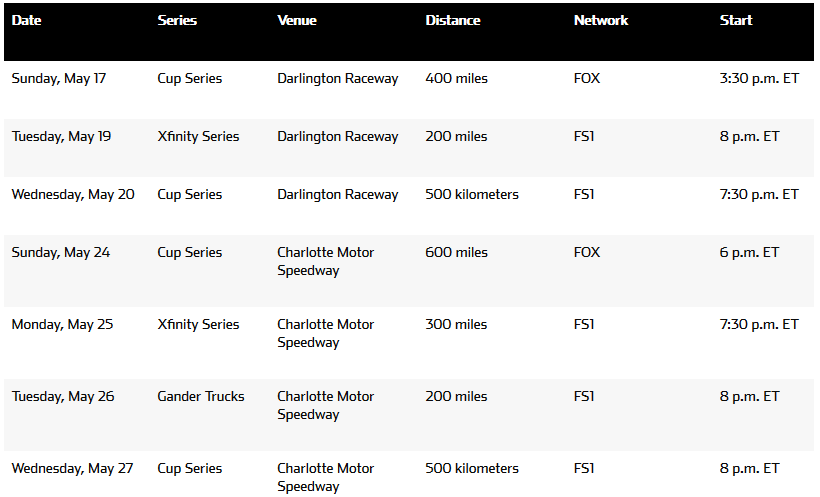