Sunday it was Kevin Harvick’s turn.   Saturday Denny Hamlin swept both stages and led the most laps in route to a win in the first race of the Dover NASCAR Cup series weekend doubleheader.

It was Harvick’s chance to shine Sunday. Harvick swept both stages and led a race high 223 of the 311 laps cruising to victory by 3.525 seconds over Martin Truex Jr., who had also finished second Saturday.

It was Harvick’s third win at Dover and the 56th in his Cup Series career. The victory also marked Ford’s 700th in the NASCAR Cup Series. Harvick finished fourth Saturday blaming a broken track bar for his lack of speed.

“I want to thank everyone on this team,” Harvick said. “Rodney (Childers) and everyone at Stewart-Haas Racing for overcoming what happened yesterday with the track bar and nailing the balance today.”

A duel between the two hottest drivers in the Cup series this season appeared to be shaping up late in the going when the field took the green on lap 222. Hamlin took second on the low side behind Harvick on the first lap. The expected duel never materialized however when Hamlin immediately reported a loose wheel.

“They didn’t get the wheels tight,” Hamlin told his team on the radio. “Dammit guys, this is the only thing that could take us out.”

Hamlin was forced to pit under green on lap 227 for two left side tires. With less than 80 laps to go, his hopes for a win were over. Hamlin finished 19th. Ironically after Saturday’s win, officials had found a loose lug nut on Hamlin’s winning Toyota costing crew chief Chris Gabehart $10,000.

In his last race as a fulltime driver at Dover, Jimmie Johnson, an 11-time Dover winner rallied from a pit-road speeding penalty early in Stage 2 to finish third. He gained track position with a two-tire pit stop on his final trip to pit road, briefly taking the lead before Harvick regained control after the race’s final restart on lap 295.

Johnson’s Hendrick Motorsports teammate William Byron, holding on to the final spot in the Playoff’s, finished ahead of Johnson in both stages and came home fourth.  He leaves Dover just 4 points above the cut line, while Johnson is 4 points below with one race to go in the regular season, Daytona.

“I’m going to do my best to forget about it,” Johnson said of the race that will decide whether he can compete for a record eighth championship in his final full-time Cup season. “There really isn’t any worrying I can do this week that will help me on a plate track.

“Studying, worrying—any of that—is not going to make a difference, so go down there, say a few prayers, say a prayer per lap and see how it plays out, I guess. We’ll race hard, and if it’s meant to be, it’s meant to be.”

The fourth Hendrick driver didn’t fare so well.  Chase Elliott came into Sunday’s second Dover race riding some momentum after finishing fifth a day prior.  Sunday, however, his day ended before it really began.

Elliott has two wins in 2020, including last Sunday on the road course at Daytona giving him the pole Saturday. But with the top 20 finishers on Saturday being inverted he started 15th Sunday.

He was fighting his way forward when on lap 6 Joey Logano and Ricky Stenhouse Jr. tangled off turn 4 just ahead of him. Unfortunately, Elliott rammed the rear bumper of the No. 18 Joe Gibbs Racing Toyota of Kyle Busch as the pack stacked up.

The ensuing damage was too much, and Elliott was forced to the garage finishing 36th.

The race was stopped for 12 minutes, 19 seconds while track workers repaired a portion of the concrete surface just inside the restart zone during the Stage 1 caution break.

The seventh win of the season broke the tie for most wins this season that Hamlin secured the day prior. Harvick also clinched the regular season title earning 15 playoff points.

“With Denny (Hamlin) winning yesterday we needed to win today, and we need all the points we can get,” Harvick said. “I think as you look at these playoffs you never know what to expect but I know that as we go week to week we will give it all we have and I am just really proud.”

Almirola, Kurt and Kyle Busch finished with enough points to secure their spots in the 2020 Playoffs.  The Cup Series’ next race is its regular-season finale, Saturday’s Coke Zero Sugar 400 at Daytona International Speedway next Saturday night.

Harvick will be the favorite when the Playoffs begin in two weeks.

“I love the grit of our race team,” Harvick said. “I think that is what Gene Haas and Tony Stewart have built at Stewart-Haas Racing. A team with a lot of grit. Sometimes we don’t have the fastest car but we have guys willing to suck it up and when we have a weak link that day someone else will carry the team. I am really proud of that and that is what it is all about. You are only as good as the people around you and we have great people.” 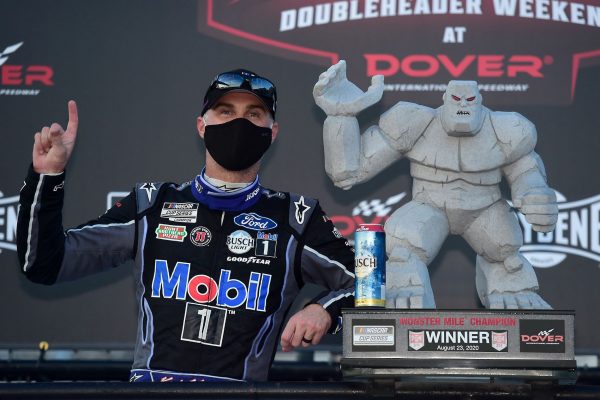