Justin Haley led two laps in Saturday’s Ag-Pro 300, but one of them was the one that counted.

Grabbing the lead on Lap 112 of 113, Haley earned a spot in the Round of 8 in the NASCAR Xfinity Series Playoffs with the victory in the second Round of 12 race, his third of the season, the third of his career and his third straight in an Xfinity superspeedway event, a streak matched only by the late Dale Earnhardt and Dale Earnhardt Jr.

Haley won the race under caution, thanks to a multicar wreck on the final lap. The victory was the fourth for Kaulig Racing in the last five superspeedway contests.

Haley finished .234 seconds ahead of Michael Annett, with Ryan Sieg trailing by .595 seconds in third. Annett, however, was disqualified after post-race inspection for a ride-height violation. His No. 1 Chevrolet was too low in the left front. The disqualification elevated Sieg to second place.

In preserving his streak on the big tracks (Daytona and Talladega), Haley had to overcome a penalty for pitting too soon in the wake of a Lap 76 wreck, with pit road closing after he had committed to enter.

“We had that penalty there and we struggled to get back—just bunny-hopping,” Haley said. “Thankfully, Kevin Hamlin, my spotter, was able to guide me through the bunny-hops and be able to go from the bottom (lane),” Haley said.

“We were so far back with 10 to go. Matt Kaulig (team owner), we love you. Three in a row. I guess I told you earlier I wasn’t saying it’s luck, but three in a row is pretty hard to do on luck. “Just super thankful. This is such a blessing.”

Xfinity Series leader Chase Briscoe dominated the race almost to the finish, leading 73 laps and winning the first two stages, but his attempt to block eventual third-place finisher Noah Gragson went awry with two laps left. An eight-time winner this season, Briscoe brushed the outside wall and fell back to an eventual 19th-place finish, as Haley charged into the lead.

“Yeah, at the end, you’re doing everything you can to protect the runs, and he’s doing everything he can to make moves,” Briscoe said. “It’s just part of racing here. It was exciting, at least on my end. I about wrecked two or three times trying to block.

It didn’t help that Briscoe had lost his drafting partner, fellow Ford driver Austin Cindric, who slammed into the inside wall off Turn 4 as a pack of cars was attempting to enter pit road on Lap 76. That left Briscoe in a difficult position, trying to win the race as the only Ford driver on the track.

“It looked like the whole pack was going to try to stop there, and I felt like that was chaos, especially with how far back in the pack we were,” Cindric said of the wreck that eliminated him in 34th place. “I just got smoked from behind. I had no chance of making it to pit road. It’s really unfortunate. Obviously, we hit the wall a ton.”

Neither of the Ford drivers, however, was devastated by the ill fortune. Briscoe already had secured his ticket into the Round of 8 with last weekend’s victory at Las Vegas Motor Speedway.

Cindric, a road course ace, likewise is in a comfortable position heading to next Saturday’s Round of 12 elimination race at the Charlotte Roval. Second in the standings, the driver of the No. 22 Team Penske Ford holds a 46-point edge over ninth-place Annett. Gragson also has a nice cushion—43 points above the cut line.

A victim of the last-lap crash, Harrison Burton, fell seven-points behind eighth-place Ross Chastain in the battle one of the final spots in the Round of 8. Chastain recovered to finish sixth after clobbering the outside wall when Burton turned his No. 10 Chevrolet sideways in a chain-reaction wreck as the cars approached the start/finish line for a restart on Lap 47.

Calamity found Joe Gibbs Racing driver Riley Herbst on Lap 42, when contact from the No. 61 of Austin Hill sent him sliding into the inside wall off Turn 4. Now 11th in the standings, two points ahead of Annett, Herbst either must win at the Charlotte Roval or leap-frog above three other drivers by erasing a 36-point deficit.

“It just sucks when a Truck Series guy comes in here to have fun,” Herbst said. “I’m really good friends with Austin, so I just hate to see that. If I went into the Truck Series and wrecked his Playoff hopes, he would be upset with me. I’m a little upset. We’re not out of it yet. It’s going to be tough at the Roval, but we’ll see what we will have with the Monster Energy Supra.” 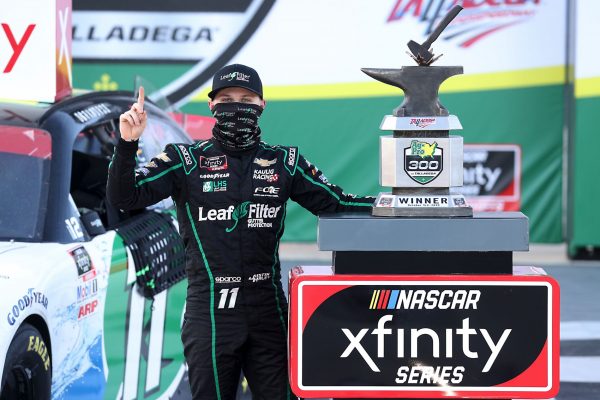