Chase Elliott is quickly establishing himself as not only a road course ace, but a serious threat for this year’s NASCAR Cup series championship.

In a repeat of last season Elliott overcame issues to win Sunday’s road course race on Charlotte’s ROVAL.  Elliott took the lead from Erik Jones on lap 92 of 109 and never looked back winning by nearly 4 seconds over Joey Logano.  It was his third win of the season, the last coming on the road course at Daytona in July and the ninth of his career. Jones with third with Kurt Busch and Ryan Blaney completing the top five.

Elliott has now won the last four road course races the series has run. Last season he overcame a headlong crash in the first turn wall to win. Sunday a loose wheel just after pit stops on lap 54 forced him to pit under green and fight his way back through the field from 38th.

It was an historic day as for the first time in its modern era the NASCAR Cup series ran laps on rain tires in a points paying race.  After heavy rain showers from the remnants of Hurricane Delta created havoc in Saturday’s Xfinity race there was a great deal of anticipation for Sunday’s Cup race. The race started in wet conditions with light showers falling and the field on rain tires.  The rain however, soon ended and by the end of Stage 1 everyone was on slick tires.  Despite severe weather in the Charlotte area the race stayed dry through the end.

The race was the finale of the postseason’s Round of 12 and the four drivers who started the day facing elimination ended the race that way with defending Cup Series champ Kyle Busch, Austin Dillon, Clint Bowyer and Aric Almirola all eliminated.

Among those contenders, Kyle Busch had the best chance late in the going, overcoming a flat tire on lap 49 to lead laps late. A caution for debris on lap 86 saw his crew roll the dice and leave him out as the leaders pitted. Short of enough fuel to make it to the end, Busch would lead three laps before he was swallowed up by the field. He would run out of fuel with two laps to go, pit and finished 30th.

“Just trying to get everything we could get,” Busch said. “You come into a race like this and you throw a couple Hail Mary’s and they rarely work, especially when you don’t have the car. That 9 (Chase Elliott) car is spectacular here and it was superfast. I followed him for a lot of laps trying to figure it out and he just gets smaller and smaller as he’s driving away.”

Clint Bowyer made a surprising appearance at the front of the field leading a total of nine laps.  He too lost ground late in the going and sustained damage on his Ford on a restart on lap 72 getting into the back of Brad Keselowski when Ricky Stenhouse Jr. spun just ahead and Keselowski slowed.

With no power steering Bowyer managed to fight his way to a 10th place finish needing a visit to the infield care center after the race.

“I’m good,” Bowyer said after he was checked out and cleared. “Was definitely outta gas. Another couple three laps and I’d have been on the ground after race crappie floppin’   Self inflicted, I shouldn’t have knocked the Power Steering out.”

William Byron tied Elliott for the most laps led, 27, and came home sixth. Martin Truex Jr., Alex Bowman and Cole Custer rounded out the top 10 just ahead of Bowyer.

With his win, Elliott is tied with Jeff Gordon with four consecutive road course wins.  And he is advancing to the Round of 8 with a win, not on points.

“That’s always the goal,” Elliott said. “I feel like you start playing the points game and you can get yourself in trouble worrying about things that are just out of your hands. As much as you want to think about those things and want to worry about them, you just really have to focus on you. And, I feel like we did a really good job of that today.”

The Cup Series’ next race is the Hollywood Casino 400 next Sunday at Kansas Speedway. It’s the first race in the postseason’s Round of 8, the final three-races that will determine the four drivers who will battle for the championship Nov. 8 at Phoenix Raceway. 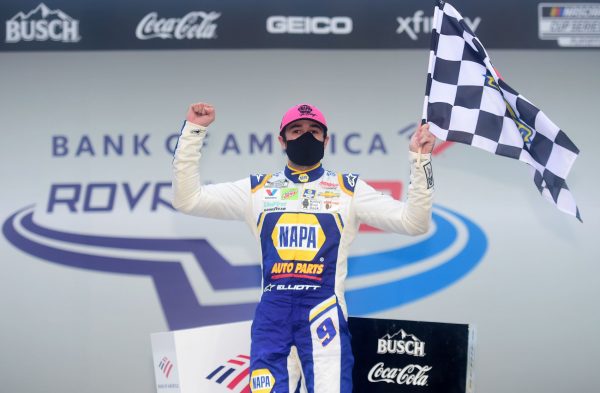