The pavement at Martinsville Speedway will be wet Thursday despite rain not being in the forecast. And NASCAR Cup cars will be taking laps around the .526 of a mile track. Normally a wet track and stock cars don’t mix. Thursday however, it will all be planned.

NASCAR will be holding a test at the track Thursday. The goal will be to gather data on the feasibility of racing on rain tires on short tracks.

Rain tires are nothing new to the sport. They have been approved for use on road courses. The grooved Goodyears made their competition debut in 2008 during the Xfinity Series race at Circuit Gilles Villeneuve in Montreal. The NASCAR Cup Series’ first use of rain tires during race conditions came last year, during the Charlotte Motor Speedway Roval race in October.

Thursday’s test comes during general testing for NASCAR’s Next Gen car which debuts next season. Thursday’s session will come on a damp track with Kyle Larson scheduled to drive the No. 5 Hendrick Motorsports Chevrolet and Chris Buescher set to drive the No. 17 Roush Fenway Racing Ford.

The goal of the test is to only use rain tires in the event of damp conditions on short tracks. Heavy rains would still force a halt to all the racing but could allow for a race to resume under damp conditions after rain has stopped. 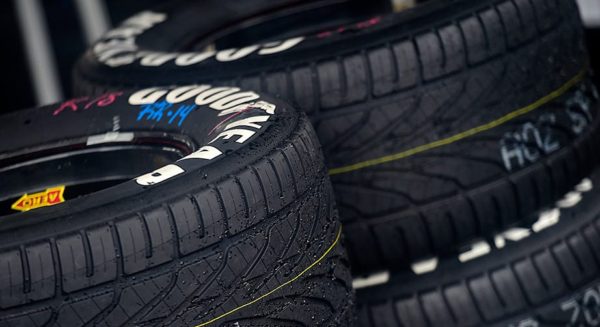 “I think the overall goal is anything we can do to speed up the drying process, regardless of the technology, to allow us to get back to racing more quickly is a benefit to the fans,” NASCAR executive vice president and chief racing development officer Steve O’Donnell said. “We’re always trying to innovate, and you saw that with what we’ve done around the track-drying system and that’s worked out well. We’ve always looked at what’s the next iteration. If you’ve looked at what the teams have been able to do with more road racing coming into the fold, the idea of short tracks and could we work with Goodyear to find a tire that would allow us to get back to racing sooner under wet-weather conditions.”

The goal would be to have rain tires available for use at tracks up to a mile in length, including Martinsville, Bristol, New Hampshire and Phoenix.

It was the use of Goodyear’s wet-weather tires on the oval portions of the Roval course last fall that spurred the conversation between NASCAR CEO Jim France and O’Donnell about using them on shorter tracks.

“Just thinking about the what-ifs and how do we get back to racing, and Martinsville became that focus for us,” O’Donnell said. “We had a conversation with Goodyear and they’re on board as well, so I think that’s why the timing just lined up for us of let’s try to innovate, let’s try this and see what we can learn.”

Ironically the forecast in Martinsville Wednesday is calling for rain with Thursday clearing. The goal however isn’t to run while it’s raining, but rather when the rains have slowed or stopped. That’s why officials decided to keep the test on Thursday instead of moving it back. That allows them to control the amount of water on the track.

“I think at this point, we’re not talking about if it’s actually raining,” O’Donnell said. “It’s more so, can we get back more quickly than the track being completely dry, which is what we require now. That’s part of the test, looking at where’s the limit, where we would feel comfortable for the drivers. We want this to be safe, so that will be part of this test — talking to the drivers, what are they comfortable with — then obviously talking to Goodyear and (director of racing) Greg Stucker and his team about how they feel and how the tire performs, what if any tweaks we could make to that tire coming out of Martinsville, so there’s a lot that we’re hoping to learn here in terms of grip levels. Each track is unique, so this is something we’ll have to look at for multiple venues.”

The wet-weather tire test on an oval isn’t the first time for Martinsville Speedway. In 1985, Terry Labonte took several laps in another Hendrick No. 5 in September 1995 at Martinsville. That short session came just one month after race officials first put rain tires to the test on the road course at Watkins Glen International, with Dale Earnhardt and Mark Martin taking turns with a set of treaded Goodyears.

If the test is successful, the biggest question then becomes: When might rain tries be approved for the short tracks? NASCAR is off this weekend but will race at Martinsville the following weekend. At this point weather can’t be predicted.

“Too early to tell, but I would say if this worked and we felt comfortable with it — and that would be both Goodyear and reaction from the drivers and teams — this is something we would look to implement as quickly as we could,” O’Donnell said. “We all know that if we can deliver a race on time or shorten those delays, that’s a benefit to the entire industry.”

That the testing will fall on April 1st, traditionally April Fool’s Day, didn’t escape the attention of O’Donnell who insists this is no joke.

“You can’t make that up,” O’Donnell says with a laugh. “But no, this is a real thing and a real test, and we’ll be happy to report back April 2nd on how it went.”